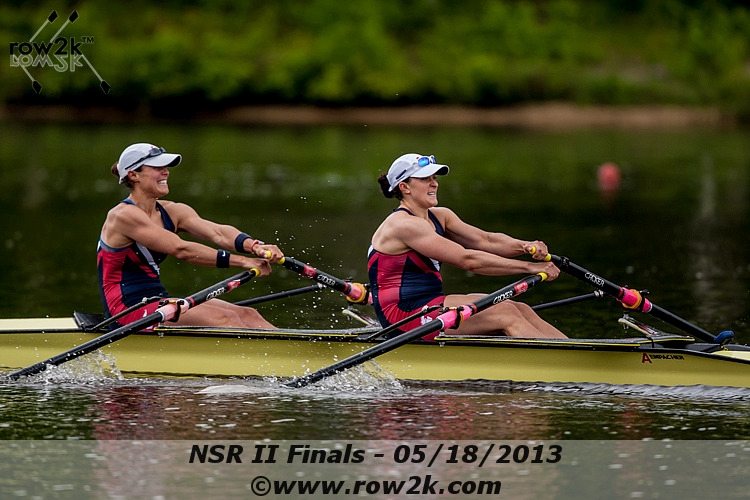 The Caspersen Training Center hummed with rowers launching in the early morning for the finals at National Selection Regatta 2 to take advantage of the first opportunity in the quadrennial to set sights on a national team spot. As is often the case in a post-Olympic year, this race was full of fresh faces, and veterans alike.

Nerves ran high because of the high stakes—today’s winners have the choice to qualify for the World Championships in their chosen event by placing well in a World Cup this summer, giving them a shot at making the national team for the World Championships in August. Some had already decided to take the spot, while some were either unsure, or had decided to forgo today’s lineups for the shot at qualifying in a larger boat.


Having both spent their college years rowing on the Cayuga Inlet—though years apart—pair partners Meg Musnicki and Taylor Gotzinger share a bond. In a tight race between three training center pairs, the two were able to sprint into the win.

“It’s fun to line-up and race against your teammates and just see what you have and where you’re at currently. It was a close race, which says a lot about the core group of athletes that we have, ” said Olympic gold medalist Musnicki.

The two have been rowing together a few weeks after multiple switches within the training center group.

“The group is relatively new and young since it’s the first year after the Olympics, so we’re just switching around and testing speed. It’s been a privilege to row with Taylor.”

Gotzinger, just a year out of Cornell, is having new experiences daily and using each piece, each race as an opportunity to learn.

“It’s another step in training and I just approach it with consistent effort. “

The two are unsure if they will be racing a World Cup in the pair. “Want to build up the speed of the group,” said Musnicki. “It’s early in the quadrennial and we’re focusing on the team as a whole.”


National team veterans Meg O’Leary and Ellen Tomek got together to race and win the women’s double. The two focused on having a solid piece and first showing for this quadrennial, "Putting in a good amount of training, trying to come together quickly. For us, staying on the power and being long and strong was our goal today,” Tomek said after the racing. The duo's excitement and enthusiasm for their boat is on clear display. Having only rowed their lineup for a dozen days, they see the upcoming weeks as an occasion to gain speed. The two plan to race the double at a World Cup, but their training until then will vary.

“Whatever is written on the white board when we get to practice in the morning is what we’ll be doing,” laughed Tomek. “Has [the boat] clicked? The exciting thing for us is that there is so much more potential to come out of this boat.”


The pair of Olympic alternate Mike Gennaro and Olympic silver medalist Henrik Rummel found success today by focusing on short-term goals. For this pair, today’s race is the christening for the four-year cycle.

“It’s important to start the cycle off on the right note,” commented Gennaro. “It’s just as important for me as it is for anyone to start off of the right—we have a really good group of guys.”

Though they will not be racing the pair at a World Cup, today’s race was an important step toward boating for the big boats on which they will focus. The two credited teammates with whom they row for their win.

“Every morning we have a bunch of pairs that are butting heads, ” said Rummel. “I thought the final went really well and a lot of credit goes to our teammates for pushing us out there. Everybody was racing hard especially the second place pair, Grant and Seth. Everybody pushes each other up another level.”


The winning Potomac double of Matt Miller and Will Cowles rowed in lockstep with the Craftsbury crew of Ben Dann and John Graves for the first half of the race.

“We started off pretty fast out of the gate, but John and Ben did too as we knew they would, we hung together for the first thousand in lock step and we were able to creep ahead of them in the third 500," said Miller.

Cowles weighed in on how they were able to use their technical abilities to pull ahead. “There was a lot of uncertainty going into the second thousand, being right next to each other. We were both using all we had and it turned out that our rhythm, length prevailed in the second half of the third 500.”

The two had the opportunity to row in the double often throughout the winter, as Potomac’s club policy does not allow singles to go out during cold-water periods. The duo found that having more time in team boats was helpful as they moved to focused work in their double following NSR 1.

Their ultimate goal, however, is not this double. The two will be coming back for Quad Trials with the hopes to race a World Cup —and eventually the World Championships- with two more teammates. While they may focus on that boat—no matter the result, these two will be heading overseas this summer for international competition.


London lightweight double veteran Kristin Hedstrom and former openweight-turned-light Kate Bertko led the pack of lightweight women after training in singles and rowing together for just a week.

“It’s been a fun week. We came together exactly one week ago, last Saturday and it’s just been a really focused week trying to put together as much speed as we can,” said Hedstrom.

“Keeping it in the honeymoon phase,” joked Bertko. “I was sold on the first stroke. It was easy, simple to hop in together and just a matter of fine-tuning.”

The two will be training to race a World Cup —together this time.


Philadelphia teammates Peter Alter and Colin Ethridge had a solid race in the double, executed particularly well through the middle thousand.

“We thought that would be our strength,” said Alter. “But we know we need to pick up a lot of time before competing internationally.”

The two are 10.4% off the Gold standard time of 6:10, but plan to pick up a bit of speed before seeing their foreign competition.


Olympic veterans Robin Prendes and Anthony Fahden led the pack to win the men’s lightweight pair. “The focus has been trying to stay motivated and making it fun and enjoyable to sustain four years.”

The two emphasized the process of the four years that will lead to Rio. Between being careful to avoid injury, stay motivated, and have some fun all the while, the 2016 Olympics feels like a long way off.

Until then, they, and the rest of the rowers vying for a spot on the 2013 National Team will put their heads down and do work to make each boat, each race faster. They will be going into contention for a four as they look toward the World Cup races, keeping their eyes on this summers goals and their minds on their next Olympic Games.