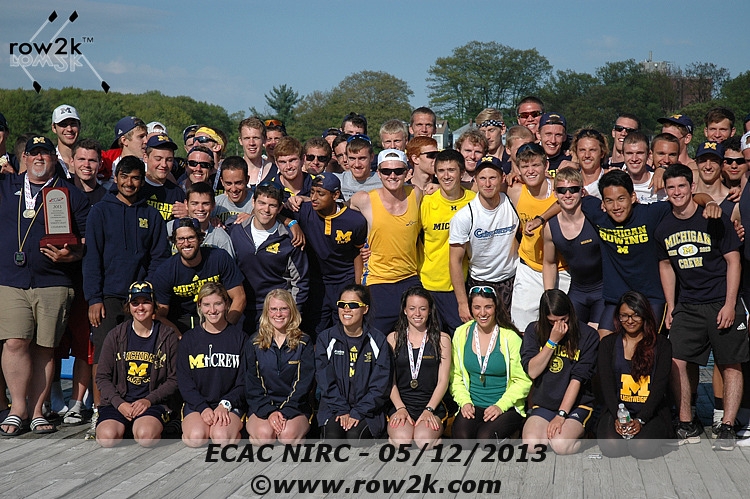 The ECAC Championship marks the end of the season for the varsity men in New England, and the last race before NCAA selection for the women, and on Sunday Division III New England schools were joined on Lake Quinsigamond by a handful of New York and club programs from around the country to face-off at the annual invitational.

Always a highly competitive field, the ECAC regatta is a last opportunity—to prove yourself to a selection committee, to try a new line-up before the last championship race, to finish your collegiate rowing career. So folks bring it every year, and Sunday was no exception.


The women's races were aggressive push by all to hear their names called in Monday night's NCAA regatta announcement. The winners did not mimic last week's NERC champions, but came quite close— between last week's NERC regatta and today's ECAC Championship, all the winners on the women's side came from either Williams or Trinity.

While Williams retained first place in the women's varsity 8+, the Bates women made an incredible push in the last 200 meters. Their silver medal, just two seconds behind the powerhouse Ephs, was nothing short of impressive. Both teams return to school this week to amp up their training for NCAA.


Michigan swept the men's 8+ events earning them the men's points trophy—in their third consecutive day of racing. After racing in heats, semis and finals at Dad Vails in Philadelphia on Friday and Saturday, the men packed up and drove to Worcester. Driving themselves, they stopped every few hours to stretch their already tired legs as they trekked north. They arrived in Worcester at 11pm, just in time to sleep for a few hours, wake up and dominate the field.

The same 2V8+ that won the JV event on Saturday at Dad Vail graced the awards dock for the second day in a row, to become what coach Charley Sullivan calls "clinkers," for the sound the two medals make clinking against one another.

"The goal is not over yet," said Sullivan. "ACRA in two weeks will give them an undefeated May. We have a little more work to do."

The men's varsity 8+ rowed across the finish line with a brand new line-up—five days old. "We simply didn't handle the pressure [in the Dad Vail final]," said 2-seat Stephen Lanham. "Today was our opportunity to learn how to do it with this young crew."

The victory was won in a hull named after former teammate William Schnittman, who died last December. His teammates spoke of him fondly as they hugged one another on the dock. Tears of excitement, of relief, of sadness rolled down the eyes of the men as they remembered their former friend and teammate.

Schnittman was a Philadelphia rower who was well known on the Schuylkill, and his parents were present on Saturday at the Dad Vail. The men had desperately hoped to win the gold on Schnittman's home course—to win it for him. Today they took the next opportunity and gave their former teammate a win in Worcester.


While Michigan's wins won them the men's points trophy, the Trinity women took it for the second weekend in a row, and in doing so nabbed the overall team trophy. With the men joining them on the dock, the whole Trinity team cheered and posed for pictures while calling out "Happy Mother's Day!" to the crowd—and a happy day it was for all the proud families and friends of athletes who competed with vigor on Quinsigamond today.