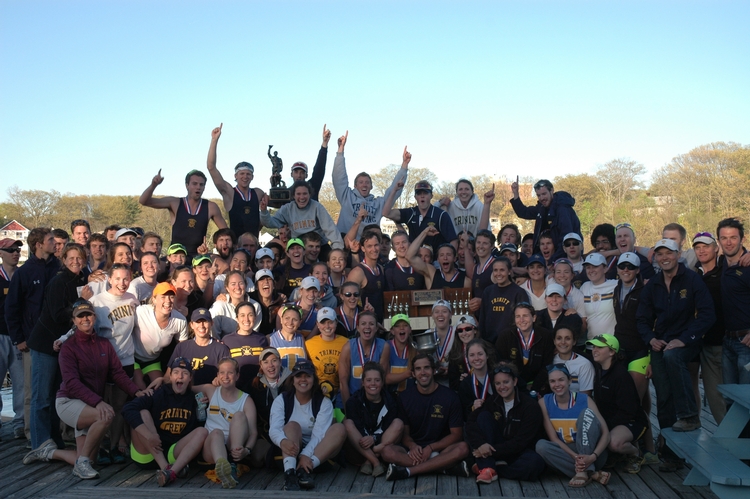 The 2013 New England Rowing Championships is the kickoff to the championship season for New England Division III and club programs. Many teams have raced one another during the regular season, but March and May racing are different beasts-- and today proved anything can happen.

The heats got underway on a clear and sunny morning; these heats were all about placing for the few coveted spots in the grand finals. Few teams were able to cruise their way into a spot among serious competition from all teams, and many heats were close until the thousand-meter marker when boats began to spread out. Coxswain calls were powerful, though at times near desperate as they drove their crews down the course. The infamous Worcester crosswind began to pick up late in the morning as the second varsity crews began their heats, but was never so strong as to interrupt the racing or show preference to any lane. Morning racing wrapped up with strong heats from the varsity men and womens eights. Strong crews pushed each other to some upsets—on the women’s side three heats forced crews to finish top-two for a spot in the grand final.

Despite the importance of the heats, crews had time and sense to make some serious fashion statements. The warm weather called for unis, but for two Connecticut College rowers, it also called for pom-pom winter hats. Maybe not so aerodynamic, but you can’t go fast if you don’t look good…right? The Tufts men were dapper in stripes, though caused some double-takes as their blue and white was oddly reminiscent of a certain Boston club. As afternoon races went off amidst clouds of barbeque smoke, rowers napped in the shade, dogs waded in the lake and coaches anxiously paced the parking lot. When a Wentworth novice men’s four rower pressed his legs straight through the foot stretchers, the afternoon racing schedule was slightly rearranged to fix the equipment, but races stayed well on schedule. Perhaps because of the Cinco de Mayo holiday, or next weekend’s ECAC Championships featuring many of the same crews, alumni turnout was seemingly more sparse than in the past. The numbers did not matter though, when crews appeared in the last 500 meters, teammates and families stormed the beach, and when boats landed on the coveted awards dock, the applause was piercing.

History prevailed when the New England powerhouse programs continued their reign of success. On the women's side, the Williams varsity rowed to their seventh consecutive win. Led by coach Kate Maloney in her second season, the Ephs held off their competition despite hard sprint by Bates. The program is viewed by many as untouchable, and Maloney described the motivation that drives the team:

“The focus hasn’t been on previous years, it’s been on this is this year and what we can do…stay hungry, not sit and wait to see what is happening around them, rather throw the first punch.”

On the men’s side, Trinity’s varsity gold led the team to close a decade of team points trophies. With the trophy hoisted high above their heads, and their teammates on their shoulders, the Bantam men were proud as coach Kevin McDermott read aloud from the trophy, “Trinity, 2003-2013!”

When the Trinity women, whose second varsity gold and varsity silver led them to the women’s points trophy, joined the men on the awards dock for a full team picture, it was a moment of great joy for the whole team. A season of hard work and determination was apparent. Next week’s ECAC regatta will culminate the men’s season, and will be another step toward the NCAA championships for the women.

However, not only historically quick teams prevailed on Quinsigamond; some new stories were written for the history books as well. The University of Massachusetts Lowell is a young program, who in their first appearance at NERC in 2011, came in dead last. Today’s race from their women’s varsity four proved that rowing is still a growing sport—as they landed on the awards dock to accept their bronze medals, their coach, Veronika Platzer beamed and cheers from teammates and parents roared nearby.

“This bronze medal performance was the culmination of four years effort to bring this program back to its proud history,” said Platzer.

All teams had the same mentality as Trinity senior captain Jake Sluis, “This is definitely not a product of the last two weeks coming together," Sluis said. "It has been hard, hard work since this fall.”

Most of the teams will be returning to Quinsigamond for the ECAC Championships next weekend, and as they packed up their trailers, whether somberly or celebratory, they soaked in some lessons from today’s racing that might, or might not, put still more new faces and names into the record books.