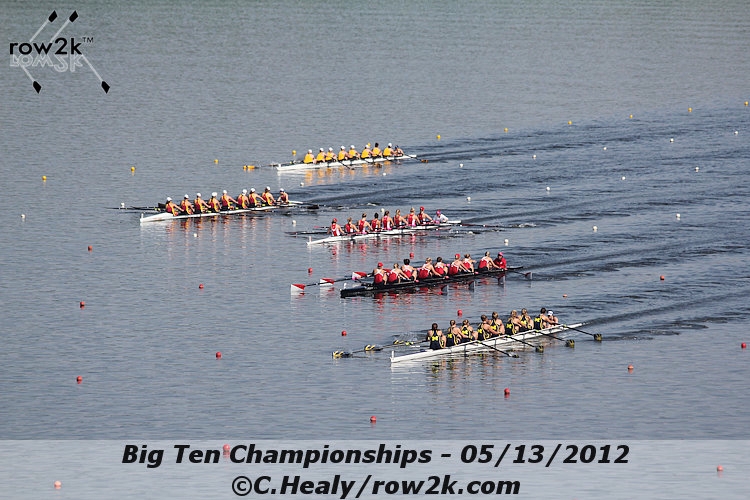 Michigan rows to win in 1V

INDIANAPOLIS -- The Big Ten Rowing Championships were full of excitement as the University of Michigan pulled off victories in the final two races to win the 2012 Big Ten title Sunday in Indianapolis.

On a beautiful day in front of a large crowd at Eagle Creek Park, Michigan won its fifth conference championship, its first since 2004. Along with the Wolverines, Ohio State and Wisconsin claimed the top three spots in all six races.

Michigan finished with 147 points, followed by Ohio State with 145 and Wisconsin with 122. While the three conference heavyweights stole the show from the Big Ten’s four other teams, every race was a close fight for the top-three finishes.

With four races down and just the first and second varsity eight races remaining, the Wolverines were sitting in third place with 42 points, five behind Wisconsin and 13 behind Ohio State. Michigan cruised to a 5.2 second victory in the second varsity eight, vaulting them into second place heading into the final race.

Separated by just 14 points, Ohio State, Michigan and Wisconsin each had a chance of winning the championship as the varsity eight race began.

Thanks to a quick start by Michigan and Ohio State, the race for the title was between the two rivals before the Wolverines pulled away near the halfway point. Wisconsin found itself in fourth place before catching Michigan State with an early sprint with 750 meters remaining. Michigan crossed the line in 6:24.350, over five seconds ahead of Ohio State. Wisconsin finished close behind, with Michigan State just .3 seconds behind the Badgers.

Wisconsin started the championship regatta with a four-second victory in the second novice eight. Ohio State claimed the novice eight and first and second fours races, putting them in first place heading into the final two races.