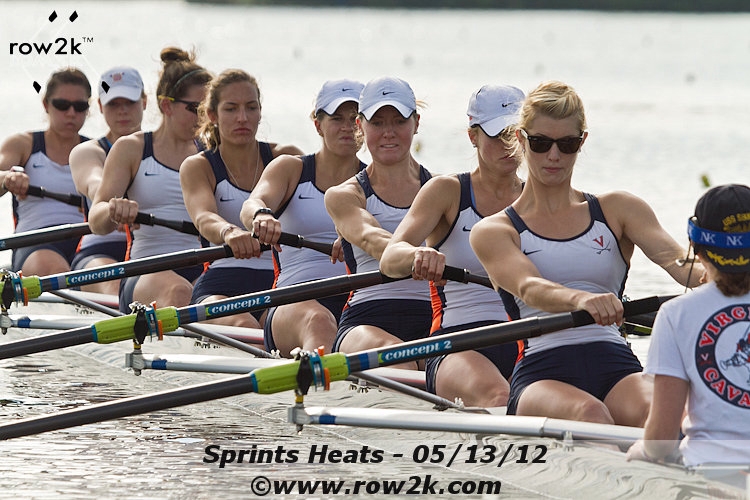 The Women's Sprints showcased a wide breadth of speed throughout the day, with at least 20 seconds separating the first boat from the last boat in each event. That said, a number of crews rotated through the medal platform, though only University of Virginia can claim a gold medal in each of the open events.

In Lightweight racing, Wisconsin took home the gold in both the 8+ and Novice 8+, while Radcliffe grabbed top honors in the 2V8.

Light Women
The much-anticipated Lightweight race comprised the most of the country's top teams in a seven boat final.

The field was tight. At the 1000 meter mark, five boats were within ½ length of leader Wisconsin. Princeton took a gutsy push—spurring a sprint from Wisconsin and the rest of the field. Wisconsin established a firm lead over Bucknell, who continued to press while also evading Radcliffe's final sprint.

"Bucknell definitely has a quick crew this year," said Wisconsin coach Erik Miller. "We need to be ready for them as I am sure they will be faster at IRAS. We still have some things to clean up and work on." Miller is encouraged by the resurgence of Lightweight racing nationally, and looks forward to seeing the entries at IRAs, which starts May 31.

Despite Wisconsin's top speed and composure, there are no seniors in the V 8+, and one senior in the 2V, said Miller of the program which includes four 8s of lightweight rowers competing for the top boats. The Radcliffe program is also deep: the V8 comprises two rowers from each grade level, and the 2V ultimately finished five seconds ahead of the field after fighting with Wisconsin for most of the race.

The 2V win is great for the program overall, said Radcliffe coach Michiell Bartmann whose novice crew also medaled—winning bronze. "Racing went really well. Of course we can work on couple of things—but that never ends. Wisconsin was the team to beat. The girls are disappointed, but satisfied with the [1V] results. We will use this [as motivation] for the IRAs. "

Open Women
In the Varsity 8+ finals, Northeastern pushed Virginia off the line and through the 1000 before UVA opened up to ultimately win by open water. Northeastern continued to build through the last 500, and fended off Boston U's sharp sprint to secure the silver over the Terriers.

"Northeastern gave us all we wanted for the first half. They were right there—they threw the kitchen sink at us," said Virginia coach Kevin Sauer. "We were able to move in the second half, but they just went after it."

"The Varsity 8+ did a good job," said longtime Northeastern coach Joe Wilhelm. "They really went out in front and stayed with Virginia as long as they could--Virginia is such strong team-- they were just too much for us today."

The other events of the day followed a pattern of crews jockeying for silver and bronze behind the Virginia lead boat. A number of teams put forth excellent races. Rhode Island's 2V made a spectacular final sprint to secure the silver just ahead of Northeastern, and in the 3V race Boston University held off Northeastern as both crews opened up in the last 500.

"There were some crews here who really stepped up to the plate and challenged us," said Virginia coach Sauer; "we had a good day." The Virginia team, which includes 19 graduating seniors, showed characteristic toughness throughout the regatta, kicking in a sprint even when it wasn't necessitated by the finish spacing.

"The one thing you can always, always have control over is how hard you are going," said Sauer, whose team, like many competing this weekend, just finished final exams. "No matter what you've got, you always go hard. Sometimes your technique is not that great-- you may lose that-- but you can always go hard."

For many teams, this championship capped their spring season. BU will return seven of their V8 rowers next year, and coach Stacey Rippetoe is looking to the V8+ bronze and the team's frequent top-half finishes to motivate the girls to keep training over summer break. "The Fours racing was awesome to see," said Rippetoe of her crew's effort and tenacity. "They didn't have the quickest start, but they picked it up and pulled it together. It was fun to watch."

Ed. note: an earlier version of this story incorrectly stated that the Radcliffe NL8 won silver; they won bronze, and Princeton's novices won the silver.