The Head of the Chattahoochee bills itself as "the last of the great fall regattas," and on the face of the 2011 edition of the race, it would be hard to argue to the contrary. Nearly 10,000 rowers and coxswains made the trip to (and down) the Hooch (which is actually held on the Tennessee River), and especially in the junior events, the regatta is probably only second to the Head of the Charles in competitiveness.

"This was the biggest year we have ever had," said Judy Kerr, regatta registrar and "dock commander." "We ran just over 1200 boats on Saturday and more than 600 boats on Sunday. Everyone was very cooperative to make things run smoothly. I think the race still has the feel of a small regatta. We try to be as accommodating and helpful as we are able, but the increasing size is making it a bit more difficult."

Aside from a minor hiccup to open the racing on Saturday morning, when the intersection of fog and quads on the race schedule forced organizers to hold up racing for 80 minutes, the PA announcements of "Attention on the venue! Calling the next event!" resumed at an accelerated clip mid-morning and the racing unfolded under gorgeous fall conditions; blue skies, light winds and highs in the mid 60s. "Perfect weather," is what row2k heard from nearly a dozen people.

Big and small college teams had plenty of racing to do at the Hooch as the regatta hosts both "Club" and "Championship" events. A good spread of small, medium and huge college teams showed up for the racing, with the Atlanta Rowing Club stealing victory from the colleges in the Men's Champ 8+, while Tennessee edged out the University of Texas by 2/10s of a second in the Women's Champ 8+.

"This was one of the tougher years of competition in the Men's Championship 8 with 20 entries of solid crews, which was more than double the number of entries from last year. I particularly like the fact that there are many crews who also race at the Charles, so it gives us a little overlap in comparison to crews we may not see until May," said head coach Jim Mitchell of Jacksonville University, who saw his V8 come 5th in the Champ 8, while his Men's Frosh 8+ claimed their fourth consecutive Hooch title. "There are so many reasons why this regatta is attracting so many people. First, Chattanooga is such a beautiful city this time of the year with the changing of the leaves and the brisk fall air. The venue is ideal for hosting an event this large with space for the many trailers, team tents, and vendors. And of course, the competition is good."

Oklahoma City University had the regatta's most successful college outing, medaling in quite a few events and topping the college points table.

If there was any doubt that Florida's Sarasota Crew is truly joining the ranks of the nation's elite Youth and Junior programs, their performance at the Hooch probably dispelled them—Sarasota travelled with a whopping 137 athletes, two trailers, and claimed 5 golds, 2 silver and 3 bronze medals, an impressive haul given the level of competition at the regatta.

"The depth of competition is quite good at the Hooch as there are competitors from all over North America," said Sarasota's Head Coach Casey Galvanek. "The regatta allowed for all of our athletes to participate in 2 or more events, although that was made difficult by the allowance of only "A" and "B" boats. Hopefully this changes next year."

Masters Events & Row for the Cure

There was also a good size entry in the Masters events, with some of the competitors in the older age categories travelling from furthest afield. Even in an Olympic year, row2k spotted Germany Head Coach (and former Chattanooga resident) Hartmut Buschbacher taking a trip down the course.

The Head of the Hooch also hosts a well-organized "Row for the Cure" effort; the Women's Master 8+, Women's Youth 4+, Women's Master 2x and Women's Championship 4+ were the designated RFTC events this year, with all competitors in these events sporting pink tees.

"We measure success for Row for the Cure at the Hooch by the amount of pink we see on the water during the four designated events and the t-shirts/bandanas and bracelets sold at the venue," said Deb Farrell, primary Row for the Cure coordinator at the Head of the Hooch. "I think that you could see that pink was the dominating color on the water and we sold out of our Row for the Cure t-shirts(pink and black versions) and came home with just enough bracelets for our archives. So we are pretty happy with our fundraising efforts this year."

The venue in Chattanooga is particularly inviting, with a hill overlooking the last 400 meters or so before the finish line. A regular tent city of college, club and high school supporter setups unfolds on the hill, allowing parents and teammates nearly ideal access to food and "easy" race viewing.

"It has been gratifying to see this regatta grow as rowing in the South has grown over the past decade," said Byron Walthall of Charlotte Youth Rowing, who attended as both a coach and a Masters competitor. "We have been attending the Hooch since about 2001 and have seen it grow in size and in organization. It is mostly a well-oiled machine. Despite this, the Hooch has a wonderfully friendly, casual and energetic feel, with the added features of traditional southern hospitality and politeness."

The course itself is built for speed; the river is wide and the course is a series of straightaways with gentle turns to starboard built in…the straightness of the course, current on the river and the relative lack of obstacles means that crews can really open up the throttle here; row2k saw a number of crews barrelling through the home stretch rating in the high 30s, and times across the events were definitely on the speedy side.

The fog delay aside, the regatta organizers found one way to manage potential race-day bottlenecks at the launch dock: on the Friday before the regatta, race officials were roaming the parking lots and staging areas and "pre-checking" hulls for bowballs and heel ties, thus allowing many crews to bypass the usual "up over heads to check shoes" on the way to the launch dock. This, along with ample dock space for launching and recovery, probably made the task of putting nearly 2000 shells on and off the water manageable.

Rowing vendors made a great weekend of it, with a few reporting that they were sold out by the end of the first day of the regatta. There was loads of great rowing gear to be had on the banks, but the runaway bestseller of the regatta was the simple PVC marshmallow shooter blow gun; by lunchtime on Saturday there was probably no one left at the Hooch who had not been hit by the mini marshmallows that were flying all over the venue.

Finally, the quote of the day: "It's only here in the south that you can see a crew from Space Coast Crew chasing down a crew from Rocket City Rowing Club!"

Head of the Hooch - Saturday 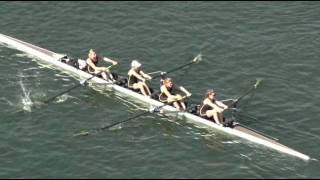 Head of the Hooch 2011
Rowing teams compete in Chattanooga.
back to top
Regatta & Event Coverage Features