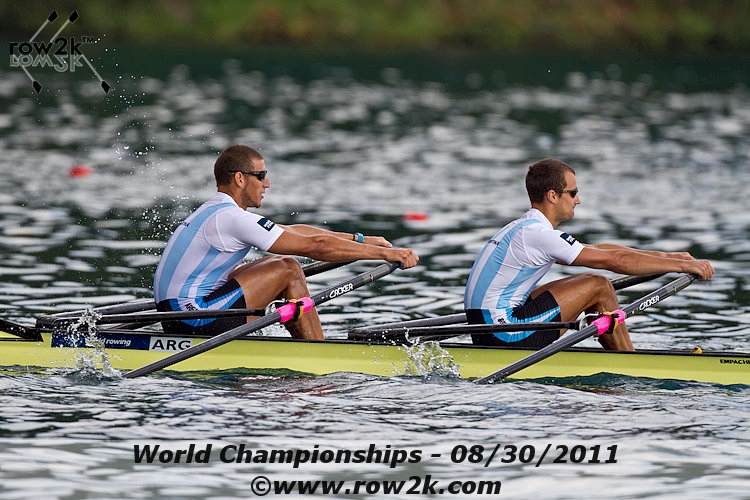 ARG M2x: one of just 2 Latin American crews to win an Olympic bid in Bled, ahead of both the US and Canada

Team USA and Team Canada traditionally run the medal table in Rowing at Pan Ams (for the record, the USA topped the medal count at 10 in 2007, while Canada won 9), but who else is coming to the Americas Fiesta? This is a vitally important regatta for many Latin American countries, many of which will bring crews intact from the racing in Bled, while several others skipped Worlds--with its Olympic-berth slugfests--to focus on these Pan Am races, and the chance to set themselves up well for the Latin American Qualifier next March. Either way, most of the Latin American countries are headed to Pan Am's with the very best athletes from their programs.

Here is a quick look by country, primarily at the competition from south of the border, as the Pan Am regatta gets set to kick off on Lake Zapotlan.

Argentina - 2007: 7 medals, 2 gold (M4-, M1x)
The Argentinian squad takes the idea of "bringing your best" quite literally: 2008 Olympian Gabriella Best, that is, who raced the single in Beijing. Best will race the single again at Pan Am's as well as the pair. In the single, she will be up against El Salvador's Olympic sculler, Camila Vargas, who has been racing the 1x since 2005 and won Pan Am bronze in Rio,. There are two former Worlds quad scullers in the mix as well: the USA's Margot Shumway, who raced the Olympics in the quad before becoming the US single sculler in 2009, and Canada's Isolda Penney, from their 2010 quad. Venezuala's Jenesis Perez is the youngster in field: 19th at Junior Worlds this year, she was just 12 when El Salvador's Vargas raced at her first Worlds in 2005.

For Argentina's Best, the real focus might just be the pair, her main event in the current Olympic cycle. The Argentine pair is the only crew in the field that raced at Worlds--they made the C Final--but the Canadian pair, Sandra Kinil and 2008 Olympian Sarah Bonikowsky, do have three World Cup medals in the eight between them.

On the men's side, Argentina was the only Pan Am nation apart from the US and Canada to field a men's double and four at Worlds this year, and will send both crews intact. The Argentine men's double was one of just two crews from Latin America to earn an Olympic bid in Bled: Cristian Rosso and Ariel Suarez took ninth overall, ahead of the Canadian crew, at Worlds. They will race some familiar faces from Worlds: both the Cuban and Venezualan doubles feature scullers from the quads that raced at Worlds, while Mexico's entry includes Arturo Bastilda, who competed in the light single in Bled. Bastilda won't be alone, racing as a "reformed lightweight" in this one: the USA double, Undine's Dan Urevick-Acklesberg and Andy Quinn, are both former National team lightweights racing up a weight class this time around.

The Argentina men's four had a rougher go in Bled than the double, eventually finishing 19th, atop the D Final, but are, again, the only crew in the field to race at both Worlds and Pan Ams in 2011. The rest of field in the Men's Four will be a contest between younger crews--the boats from Ecuador, Mexico, and Nicaragua boast some U23 experience--and the very senior Olympians in the event: Brazil's Anderson Nocetti, three times an Olympian in the single, and the USA's Jason Read, Olympic Champion in 2004. Both Nocetti and Read have international careers stretching back to the late 90's.

Brazil - 2007: 3 medals
The light women's single field has the lone reigning world champion at this year's Pan Am's: Brazil's Fabiana Beltrame. She won Brazil's first-ever gold in Bled, leading wire-to-wire to hold off Swiss sculler Pamela Weisshaupt and the USA's Ursula Grobler, who faded from second to fifth. The US entry here at Pan Am's, 2008 Olympian Jen Goldsack, lost out to Grobler for that spot on the Worlds team, but is fully two months further along in her comeback now. The field features one other single sculler from Bled, El Salvador's Marta Figueroa, who took 5th in the C Final, while Argentina's Deborah Lince comes out of the light quad that took 8th at Worlds.

Brazil's light women's double also has a good pedigree: Camila Carhalho and Luciana Granato were the Brazilian entry in this same event in Beijing and are back in the boat for their first international race since the Games. Cuba also returns half of their 2008 Olympic double: Yaima Velazguez, who gets a new partner in Yoslain Dominguez, one of the scullers who has been racing the light double this Quadrennial. Mexico is racing half of their most recent international combination, as well, with Lila Perez Rul staying in the double and also racing the light single, while Bled partner Fabiola Nunez races the open single and double. Argentina is using their Worlds roster a bit differently for this event, boating half of that 8th place light quad into the double for Pan Am's.

Chile - 2007: 1 medal, 1 gold (W2-)
Chile is the only country besides the US and Canada ever to win the light four at Pan Am's (in 2003), and the Chilean four was right in the mix in Bled. The light four was, as ever, brutally competitive at Worlds--with even the USA and Canada C Final-bound when the dust settled in the repechage round--but the Chilean four was right with the top US and Canadian lightweights, missing the A/B Semifinal by less than a second, behind Canada, when Serbia grabbed the last spot. The next best crew in this one could be the Cubans, who also nearly made the A/B Semis at worlds (their margin was a bit closer to 2 seconds), and will race the same boat at Pan Ams. After that hard race in the Worlds reps, however, it was the Mexico and Argentina crews now at Pan Am's who rallied in the semis to make the C Final. In the end, Argentina came through in the closing sprint to edge Chile for 15th overall, right behind Canada's Worlds crew; Mexico took 18th, while Cuba faded to 20th in the D Final behind Japan.

The rest of the light four field did not race at Worlds, but features an impressive array of experience, from Brazil's Jose Sobral, Jr, a 2004 Olympian, and Thiago Almeida, a 2008 Olympian, to Canada's Terrence McKall, who rowed the LM4 for Canada at Worlds in both 2009 and 2010. The US and Guatemalan entries, even without a trip to Europe, have actually seen quite a bit of each other: the Guatemalans got the better of essentially the same crew of Americans, racing as the New York AC, at US Elite Nationals, while the US crew edged Guatemala for razor-thin win at Canadian Henley once they sorted out their final line-up.

Cuba - 2007: 7 medals, 5 gold (M2x, LM2x, M4x, W1x, W2x, LW2x)
Cuba leads with their top sculler Angel Fournier, fresh off an 8th place finish in the men's single that earned him the other of the two Latin American Olympic bids won in Bled. His event features the lone US racer from the 2011 senior team, Ken Jurkowski, who faced the Cuban in the B Final, where he took 11th to sew up an Olympic bid. Jurkowski also raced two of the other scullers in the Pan Am field at Worlds: he saw El Salvador's Roberto Lopez in his heat, and took on Mexico's Patrick Loliger in the quarterfinals. Also racing here with 2011 Worlds experience will be Chile's Oscar Vasquez, who took 21st overall in Bled, and Paraguay's Daniel Sosa, who finished 28th.

Cuba's Men's Quad was also looking to qualify for London at Bled, but took 12th in the B Final and just missed an Olympic berth. Cuba will be tripling out of the quads at Pan Am's, with Janier Concepcion and Yoennis Hernandez racing the double and the eight in addition to 2-3 rounds of the quad. Venezuela's quad also raced at Bled, but was off the pace all week, and eventually took 20th, and last overall, by week's end. In this race, the Americans will be racing a crew made up of the heavy and light double, which winds up being an all lightweight combo, but all four have Worlds experience, plus Tom Paradiso's Olympic credentials.

The other Cuban crew headed to Pan Am's with a solid Worlds showing under their belt is the Men's pair, which took 14th, ahead of Argentina (16th) and Chile (21st), who will race them again in Mexico. The US crew in this event does not have a long international track record in the pair--actually none, apart from the races at the USA World Challenge in Oklahoma--but this duo, stroke Mike Gennero and Ty Otto, did pace the US U23 eight to a World's Best Time in July.

Mexico - 2007: 1 medal
Two of Mexico's most senior lightweight women are pairing up for the host nation in the open double, with two-time Olympian Gabriela Huerta joining up with Fabiola Nunez, who raced the light double in Bled and made the D Final. Argentina also has two lightweights racing up in this event--2004 Olympian Milka Kraljev and Maria Rohner, stroke of the light quad that raced in Bled--while Cuba's young crew includes Aimee Hernandez, who took fourth in the single at the 2009 Junior Worlds. The USA's Megan Walsh is the only sculler in the event with a senior Worlds medal: the silver she won in the US quad in Poznan.

For the Mexican men, the light double finished just one spot below the light four at Worlds, winning the D Final, and this is another event for the host nation to target. The Cubans did a few places better in Bled, taking 15th, one spot behind the US crew that narrowly won the US Senior Trials over the eventual Pan Am combo, 2008 Olympian Tom Paradiso and Bob Duff. The other two crews in the field that raced at Worlds are Argentina and El Salvador, who took spots 24 and 25 overall in the D Final.

W4x and M8+
That covers all the events, save two: the Men's Eight and Women's Quad. Both events are straight finals, and both are made of up rowers doubling--or even tripling--from the other events. Expect to see lots of the aforementioned Olympians taking seats in the big boats to end the regatta next Wednesday.