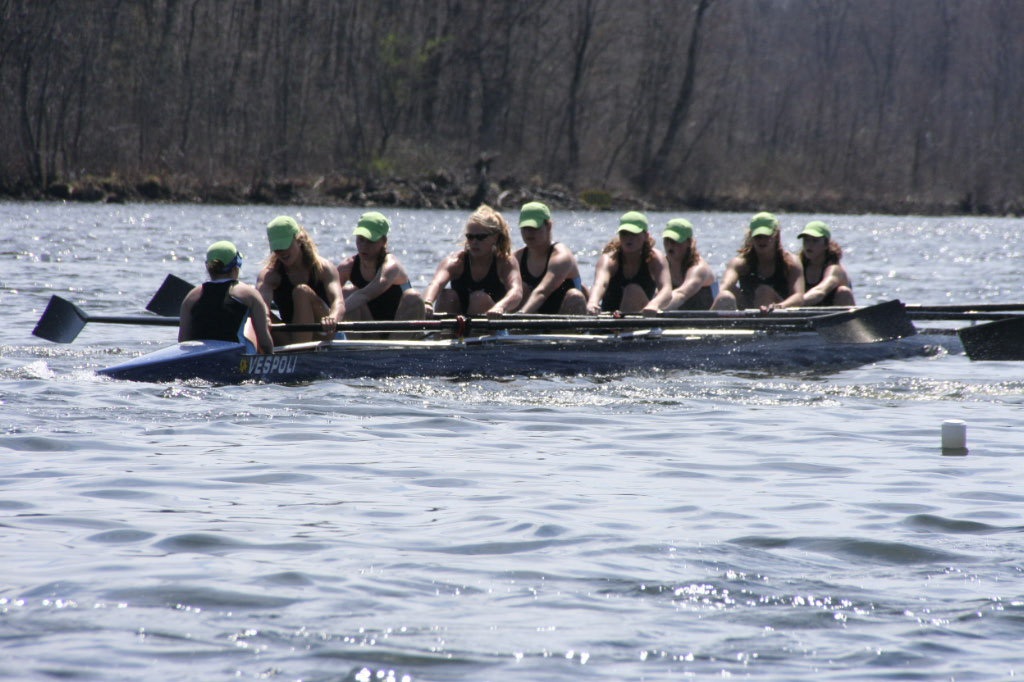 At the Saratoga Invitational on Saratoga Lake/Fish Creek April 25 and 26, it seemed everyone was getting a lesson. New volunteers from Saratoga Rowing Association (SRA) were learning the finer points of running a regatta that grew from 9 teams to 32 in one year (and the application of sunscreen, shame on those sun burnt parents!); new rowers were learning what in the world was 'sculling a boat around' on the stake boats; referees were learning to calmly count to 10 while disqualified athletes (sobbing) pleaded their case against a ruling; and high school rowers were learning that 2000 meters really hurts when you are used to 1500 meters.

A bit about the distance of the races. On Saturday, teams raced in 6 or 7 lanes for 1500 meters, all in marked lanes with 500 meter buoys. At 86 degrees plus, the weather was hot by April-in- northern-New York-standards; water conditions were more or less friendly, and racing sometimes even got ahead of schedule despite some problems at the stake boats from occasional quartering winds of 8-15 miles per hour and lack of stake boat experience (more about this later).

On Sunday, teams raced 2000 meters from 4 stake boats, without lanes for the first 500 meters. Weather was not as cooperative, and gusts partnered with some current shifts made for some ugly water, particularly in the late morning. These races were scheduled in "flights" due to the fact that Sunday being a "school night" prevented distant crews from staying for a full schedule of heats and finals.

Race organizer Chris Chase of SRA figured the scholastic programs would embrace the 1500 meter events (that had heats and finals in many categories) and the club programs would be all about the 2000 meter races. Truthfully, almost every team took a stab at both distances, with varying degrees of success. From the coxswain seats, those unaccustomed to the length were having a hard time keeping crews motivated - some seemed to want to say, "Whoa, the finish is a long way away."

Stake boat drama was plentiful both days. Saturday referee/starter Wayne Butler was the picture of patience while he instructed at least two crews for every race how to scull a boat to get a point. At one point, a 3v/4v W8+ went totally awry, and although he wanted to go to a countdown start, every time he got close to that goal, one of the boats would end up perpendicular to the lanes and good sense prevented it. That one race put the schedule behind 20 minutes, when it had been ahead about 7 minutes. You get the picture (your reporter got a video of this). The clear message that coaches likely take away from these delays is perhaps to spend some time practicing the skill of getting on a stake boat. Some crews were so flustered, it took the first 250 just to regain composure.

On Sunday coxswains had something new to think about. The aforementioned quartering wind presented some challenges in the first 500 meters—an expanse of water without lanes and irregular shoreline. Several times the starter or chief official called back a race in the first hundred or so meters as boats clashed and boats were warned for impeding. When referee Kathryn Flanders did her stint on the starting platform, this English-teacher-by-day handled this with formality and composure: "We sincerely apologize for any inconvenience, but we are re-starting the boy's races, so all girls' boats please leave the starting area."

Thankfully coaches had prepared their teams for anything after the first 250. Heard from one Frosh rower, excitedly: "We actually have a race plan this time!" And they did. There were several crews that came really prepared to race—admirable for this early in the season, particularly the northern crews who have still been breaking through ice to get a few thousand meters of rowable water.

There were a few that were so prepared, they had a hard time ratcheting it back. In the Women's Varsity 8 heat late Saturday morning, Maritime Rowing Club and host club Saratoga were leading by more than 5 lengths at a rating of 34.5, and were still fighting it out for the "W" even when there were 2 slots for the final. At the final later in the day, it was Maritime, Saratoga again, with Mount St. Joe's rounding out the top three.

In general, Maritime Rowing Club girls had good judgment, poise and nice green hats. When a hot seat situation made the lightweight varsity eight miss the start of the final, they handled it with a great deal of class, then rowed down with the Petite (heavyweight) Women's final, and led the entire way down the course. In the 2k the next day they earned a third to Community Rowing of Boston and Mount St. Joseph's of Philadelphia.

Community Rowing of Boston also had some slick crews, with a Men's V4+ that was winning by hmm, maybe 10 lengths? At 5:23 over 1500m on Sunday, their time was as fast a varsity women's 8's going down, and that was after they lowered the rating and eased it in the last 500 meters. CRI's women's and men's lightweight crews had some great rows as well.

In the Grand Final of the Men's V8+ on Saturday (1500 m distance), Mercer Junior Rowing Club led start to finish. They must have absorbed some good vibes from the national team that shares their body of water—they were impressive, getting a full 6 seconds on the 2nd place Shaker High School boat.

It seemed the local crews brought the small boats, as Shenendehowa High School of neighboring Clifton Park, New York brought the winners of both singles races: Abby Knight for the women and Ian Fisher for the men.

Sunday racing was stopped for over an hour while gusts kicked up the water to white caps, and although racing resumed, some Eights races were cancelled later in day. Most of the crews, however, had match-ups during racing Saturday.

Regatta director Chris Chase is jazzed by the success of the races on Fish Creek, and local club Saratoga Springs Rowing Club (not be confused with other Saratoga Club SCR and SRA) branded the homegrown series. The newly-minted "Fish Creek Regatta Series" has the signature menacing fish from the Head of the Fish (created by local architect Tom Frost) as a mascot, and four events on the schedule. But not so quick…! Ask Chase about his new race in the works that offers a trip to SilverSkiff regatta in Italy to the victor. Current races are Saratoga Invitational, New York Scholastic Champs, Tail of the Fish and Head of the Fish on the list. In 2010, the Scholastic Nationals are back in Saratoga, so make room on the t-shirt. 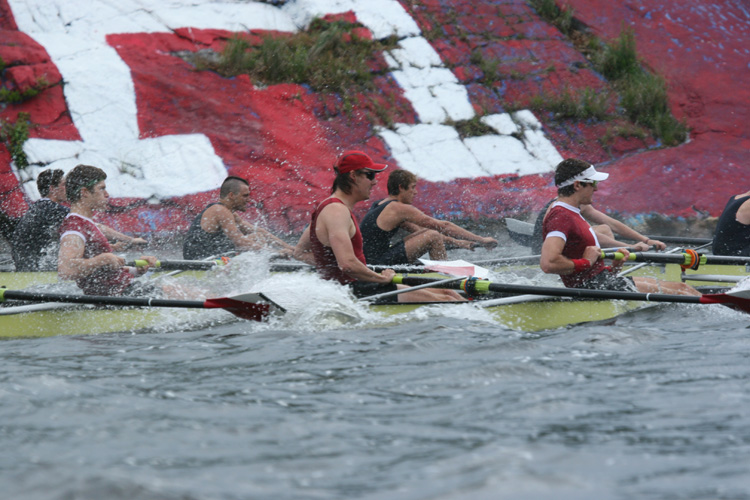 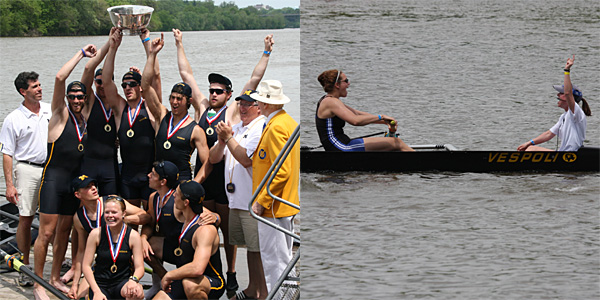 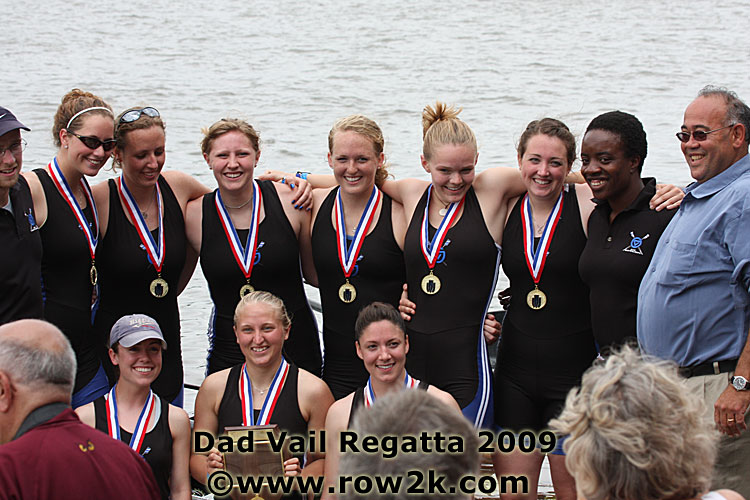 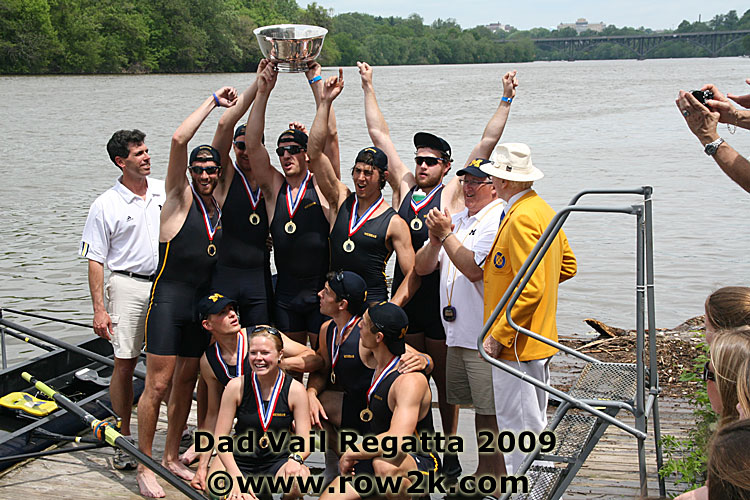