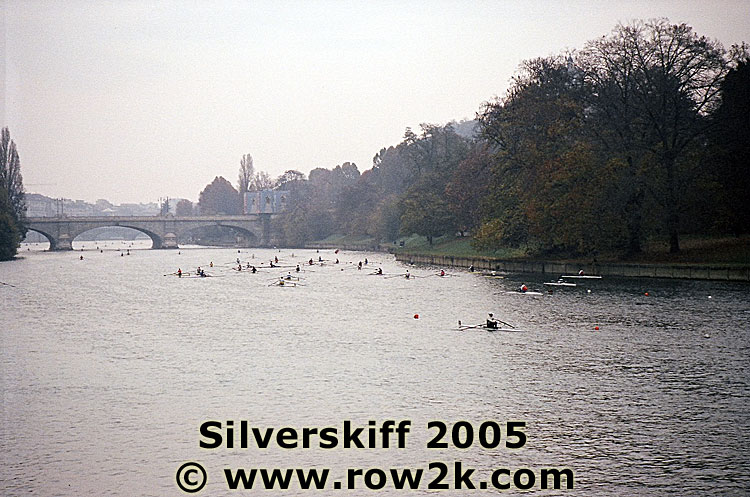 After the Northeast US head race season ends at the beginning of November, we usually have 3-4 weeks of rowable weather. Rather than train indoors, most of us cling to rowing on the water as long as possible, watching the leaves fall and the temperatures plummet. Depressing.

So I was intrigued when I first heard of the Silverskiff race on the Po River in Turin, Italy in mid-November. A perfect way to cap the season: an 11km stake race for 1x’s. But what to do about a boat? Then I met masters sculler Carlo Zezza, who won his category at Silverskiff last year, and he explained that Empacher sponsors the event and brings boats for foreigners to use at no charge. I e-mailed the organizers and they offered me a boat, a special rate at a nearby hotel ($60/night including breakfast!), and transportation to and from the airport. Air fares are cheap because it’s the off season (I used frequent flyer miles), so the decision was obvious.

Henry Hamilton and Zezza won their respective categories last year, so I felt a responsibility to do well – but also wanted to eat well. I tried to persuade some of the faster US masters in my age group to come so I could focus on food, but no luck. I would have to multi-task.

When I arrived, my host Alberto Graziano explained that Silverskiff is both a competition and a fall festival; many people come just to participate. It began in 1991 as a veterans race and has expanded into a full-blown two-day FISA event. A shorter Kinderskiff race runs on Saturday for kids under 15 years old (162 racers this year) and Silverskiff runs on Sunday for everyone else (272 racers, for a total of 434). It attracts top-level scullers: Athens Gold medalist Olaf Tufte (who won this year) and Silver medalists Juri Jaanson and Ekaterina Karsten (who won the women’s category again this year), elite Swede Lassi Karonen, and top Italians Leonardo Pettinari and Elia Luini (who won lightweight). At the other end of the age spectrum was Achille Giovanni, a ‘50’s Olympian who is 79 and still fast: he won the over-70 category by over 5 minutes!

There are at least six rowing clubs on the Po in Turin, and Silverskiff is hosted by the oldest: Reale Societa Canottieri Cerea. Founded in 1863, Cerea is the oldest rowing club in Italy and possibly in continental Europe. FISA was born at the club in 1892 as the result of an international meeting held there. A charming quirky structure perched on the bank above the river, the clubhouse is filled with rowing memorabilia of all sorts and eras – and even more is in storage. It has three boat bays, a restaurant, lobby and bar, a weight room, ergs and spinning machines in an upstairs locker room, and a sauna, and opens onto a terrace overlooking the river.

The Po in Turin is similar in width to the Charles and, like the Charles, has parks on both banks most of the way. The trees were turning color while we were there, so it was very beautiful. The racecourse uses the upper 5.5km of the 7km stretch of usable water between a dam downstream and shallows upstream. It includes three bridges and some moderate bends, but nothing like the Eliot turn on the Charles. Unlike the Charles the Po has appreciable current, so rather than take the shortest line one hugs the bank on the upstream leg and mostly rides the middle coming down. In addition to landmarks, floats every 1K from start/finish give you a good idea how far along you are. Water quality is good: sewage from Turin and communities upstream is routed to a treatment plant far downstream. Daytime temps were in the 50’s to 60’s.

The regatta hotel is just a 10-minute walk from Cerea, across the next bridge downstream and two blocks uphill. We were told it was formerly "a popular place for couples to meet in the afternoons" via a discreet side entrance, but it is now a thoroughly respectable and comfortable member of the Best Western chain. There are two excellent local restaurants within a couple of blocks, and the Caprea Rowing Club right by the bridge also has great food (dining rooms in Turin's rowing clubs are open to the public).

On several training rows I encountered gaggles of children in singles, shepherded by coaches in launches. They looked completely comfortable on the water, even when overlapping each other, and some of them sculled very well. While threading through one group, I veered too close to one of them, who piped "Attenzione!" It was a wisp of a girl who looked to be about 12. I was told that kids can begin sculling at 10 and there is age-group racing for them beginning at 11. They start out in boats that are 3 feet shorter than racing singles and heavier, but about as narrow. Within a year or two they graduate to regular shells. Too bad programs like this are not widespread in the US.

In addition to Zezza and myself, there was one other US sculler: Charles Burckmyer from Riverside Boat Club in Cambridge. Three amiable Brits and a Canadian naturally gravitated together with us and we helped each other out and dined together.

Race day dawned overcast with a threat of rain, which fortunately did not materialize. I started 272 of 284, and at three boats per minute I had to wait 90 minutes. I hung out in the clubhouse, watched the first boats start AND finish 40 minutes later, and then finished warming up and launched. The race went by faster than I expected; I suppose passing people kept me focused. I caught two guys approaching the stake and just squeaked by for a clear turn. I finished second in my age group, so honor was satisfied. Zezza won his age group again, and Burckmyer did well in the Senior class, finishing just behind last year’s winner Jaanson.

The event was impeccably organized, probably because the organizing committee all took the previous week off work. Results were posted very quickly after the last finisher crossed the line. Dock space was limited, so they sped up traffic by having volunteers put your flip-flops and extra gear into a numbered bag which they brought back onto the dock when you returned. Buoy lines in strategic locations separated up and down traffic, and there were a lot of marshals on the bank and in safety boats. They arranged for architecture students from the school across the street to design and build a multimedia display on the terrace, and set up displays of antique wooden rowing shells and equipment along the path into the club. They even printed up a poster and a calendar for the event.

I’ll be back next year.

To the two winners, medal, coup and mountain bike, have been given with the approval of all the people around.

The Silver skiff of the records is over.

In fact we are very please to report that this year the silver skiff not only did reach 284 participants but we also had among the 284 people champions like Olaf Tufte, Alessio Sartori and Ekaterina Karsten and many others including some Italians who really made the race one of the best of the last years.

Olaf Tufte who started with the number 123 won the regatta with the incredible time of 41.25.8 just 26” over the record of Andrè Williams. The second one has been Lassi Karonen from Sweden with the time of 41.50.6 followed in the third position by the fist of the Italian Leonardo Pettinari of G.S.Forestale in 42.19.3 The winner of last year Juri Yaanson who started first did arrive only 18th which does say the level of the participants of this year

We wish to mention as well, before to talk about the women results ,the participation of Dirk Bangert from Denmark, Charles Burckmyer from U.S.A., Paul John Flory and Carlo Zezza also from U.S.A. and of the Canadian James Malebranche.

Regarding the results of the women we have to report that , as expected Ekaterina Karsten won for the second time the regatta in 45.23.5 and the Italian Elisabetta Brugo has been the second in 46.39.9.

The third arrived has been Gabriella Bascelli followed in the ranking by Alessandra Caraffini and Erika Mai respectively in 48.21.3 and 48.23.1