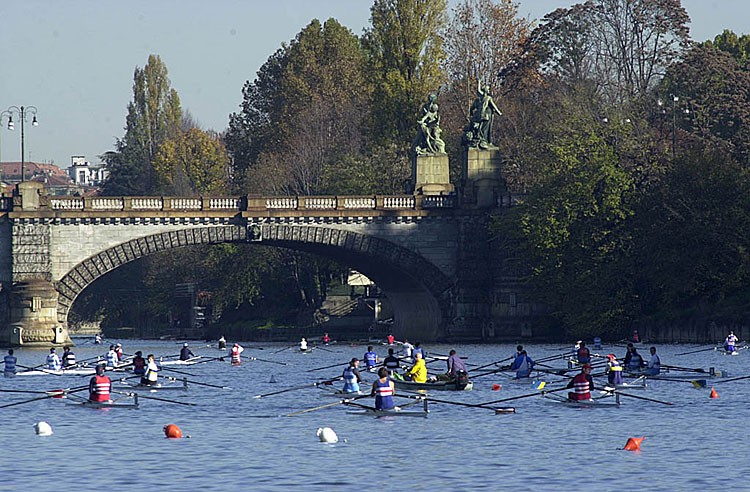 The thirteenth edition of Silverskiff Trophy, the 11k singles race organized by the "Reale Società Canottieri Cerea" of Turin, Italy, took place on the 13th and 14th of November. The winners were the two silver medals of Athens Olympic Games: the Estonian Juri Jaanson and the Belarussian Ekaterina Karsten.

Jaanson and Karsten won against a fierce group of athletes who rowed in a day that represented on one side, an important international competition, and on the other, a sport day on the Po river, where thousands of people gathered under a splendid sunshine, creating a suggestive background to the event.

It was because of a contrary wind during the second part of the course that the Estonian could not break the record of the 11 km of this year competition, that has been said to be "extremely sharp but so wonderful in its environment". Elia Luini, lightweight of Gavirate, finding his good form, was a strong rival and he competed up to the end for the victory, taking only 27" from the winner and placing himself before two rowers of Sisport Fiat: the under 23 David Nestola and the Junior Andrea Messina, both first in their category; after another Junior: Matteo Motta of Armida Turin and the Italian Bruno Mascharenas.

Noteworthy the eighth position of Luca Motta of Esperia Turin, who was first in the category Boys. As for women the success of Ekaterina Karsten was absolute. In fact she gave more than 1 minute to Elisabetta Brugo of Esperia, Turin. A part from the technical result of the competition, that was very interesting indeed , the real success of the event was the scene of two hundred boats going up the Po river for 5.5 km before turning downwards and crossing the finishing Line in front of Cerea. US scullers rowing the race included ironman Henry Hamilton, who just two weeks ago competed in his 39th Head Of The Charles; Hank has rowed in every HOCR save one, when he was serving in the Vietnam war.

See also the photo gallery from the racing.