Tigers Grab the Tail of the EAWRC Sprints 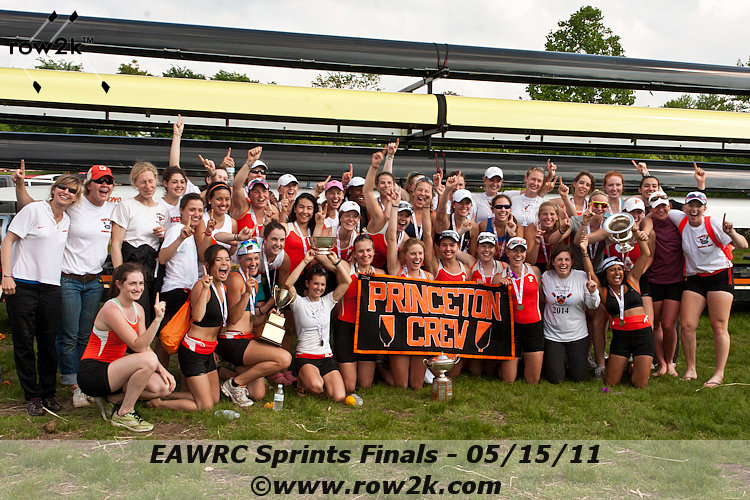 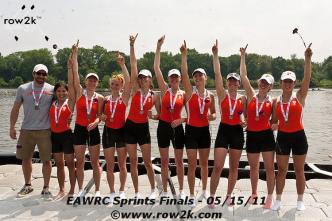 Just moments after winning the Women’s Varsity Eight race, the Charles Willing, Jr. Team Trophy and ending up in the Cooper River, Princeton Head Coach Lori Dauphiny took last year’s team captains (and 2010 silver-medalists) Sara Hendershot and Ari Frost aside and told them, “You know this is all because of you; you led the charge for this team, I am really proud of you.”

Focusing on the athletes resulted in a very successful program this year at Princeton: on a day where rowing conditions offered an absolutely ideal stage to showcase all the athletes of the EAWRC, despite the slightly accelerated schedule due to threats of a storm, the 2011 EAWRC Championships in Camden was the Princeton show, with the Tigers winning four of the five open events and the lightweight varsity eight.

Princeton Athletic Director Gary Walters was even in attendance, remaining near the awards platform meeting parents and regatta officials with a seemingly permanent smile.  To top it off, in winning the Varsity Eight to close the day, Princeton set an Ivy League record of 15 championship titles within the athletic department this year, a record previously shared by both Harvard and Princeton at 14.

“I think [that record] is a significant achievement, and I am glad that it was Lori’s team that earned this, because I know how hard they work,” said Walters.  “To culminate with the kind of performance they did today makes it even more significant,” added Walters.

The kind of performance Princeton delivered to the spectators was dominating. After having a 2010 that saw a perfect regular season turn into an exercise in challenging but never overtaking Yale in the championship races, Princeton’s effectiveness Sunday both completed a drive to the Ivy title, and signaled a shift in the league’s balance of speed.

And it is a league that will be changing. With the move to NCAA automatic qualification by conference by 2013, the Ivy League felt a need to establish a stand-alone league championship, and withdraw from the current Eastern Sprints in 2012. It is a move very much in keeping with the decisions other conferences have made in the years since 1997’s first NCAA Championship. It means that the eight Ivies (Brown, Cornell, Columbia, Dartmouth, Harvard-Radcliffe, Pennsylvania, Princeton, and Yale) will now hold their own regatta, and the non-Ivy members of the EAWRC will make plans either for a separate championship or focus on their own conference on their own conference regattas, like Northeastern's CAA Championships or Navy’s Patriot League Championships, for example. This made for a lot of commentary in Camden about 2011 being the last Sprints, and what that meant to the coaches and teams who have participated for years.

The run started with the 3V and, in the heats, Princeton had lost by a decent expanse of water to Brown. “The 3V is freshmen with one sophomore with a mix of rowing experience, the coxswain joined the team in January,” said Princeton Assistant Coach Kristin Haraldsdottir. “I’ve been kicking their butts in practice,” she quipped.  Seems to work: by the finals, this young crew had figured out what to do.

The open Varsity fours had Princeton winning as well, certainly the most ebullient of victors. When asked why they were so over-the-top thrilled with their win, Princeton Assistant Coach Helen Betancourt said, “They just handled a lot of adversity; it was impressive to see them put it all together.  We have been trying to find the fastest combination, and this is the first time this line-up has raced, we’re really proud of them; it was a very gutsy piece on their part.”  Evidence would suggest coaches found the right crew.

The 2V Eights race was a burner to the very end as a strong contingent of 2V Eights stormed into the finish. Princeton had a full-boat lead going into the last 250, but the race for second just behind them was fierce.  Racing in third approaching the line, Yale needed just 10 monstrous strokes to propel their boat ahead of Brown, giving them a photo-finish-hundredth-of-a-second edge for silver.  These character tests might prove useful for Will Porter as he rebuilds his team after the loss of several key seniors last year, including 2010 Sprints and NCAA I Eight champion stroke Taylor Ritzel, now training with the US Senior Team.

After the Princeton 2V Eight won their race, Dauphiny quickly congratulated all the athletes and hustled off on her bike the catch the Varsity Eights, who were warming to start their bout 2k up the course. She was having a big day.

In the varsity race, Princeton took charge early, as has been their trademark all season, and had open water before the 500 meter mark.  Brown was solidly in second most of the way, but Yale and Dartmouth, have their own very strong day, moved at the same time in the third 500, putting Brown in fourth briefly.   You never count a Brown crew out as the finish line approaches, and sure enough Brown fought back through both, with Dartmouth getting the bronze, and Yale left in fourth. It has been a while since Dartmouth has earned a medal here (the last was a bronze in 1997), and the team was very excited on the dock and the shores. Congratulations to Wendy Levash and the women from Hanover.

While Princeton’s 1V was docking to take another set of gold medals back to the boating area, Dauphiny was asked what had changed with Princeton over the last year since their solid but not always winning performances in the previous season. Dauphiny admitted, ‘I don’t know!” but she considers her athletes the driving force of the team. “It is really the charge of the girls on the team; I give a lot of credit to them,” said Dauphiny. “It was the momentum [from last year’s athletes] that allowed this to happen,” she added. “My assistant coaches were absolutely awesome.”

“We had some injuries, some line-up changes throughout the season, but the ways the rowers handled was great,” said Dauphiny. “I don’t think we had the same line-up for more than 2 races during the season, in all of our boats.”

“We will take a day off, and most of them are in exams,” says Dauphiny of the plan for the next few weeks. “Most of the girls had finals Friday, and have finals tomorrow,” she says.

“I am extremely proud and happy about their accomplishment,” she asserted, “and I can’t remember the last time we won the team trophy.” On the importance of that achievement, Dauphiny added, “The team captains have always driven home the idea of how important every member of the team is.” Today at the 2011 EAWRC Sprints, they were right.

The success of the favored Princeton lightweights after the Wisconsin Badgers owned the 2V Lightweight finals to start the afternoon was uncertain, even with several solid wins during the year.  Erik Miller’s Wisconsin Badgers have historically ruled the Sprints’ water, and when the 2V won by so much the announcer said, “Wisconsin is so far ahead, you can probably see them on Google Earth,” the Tigers had reason to look at their race plan, the fact they hadn’t won the title since 2003, and get their game faces on.

For Wisconsin, Head Coach Erik Miller was happy with his younger 2V crew and their performance. He graduated a lot of athletes last year, and had only 2 seniors per boat at the Sprints, with not many juniors. So these sophomores and freshman rowers are rebuilding the Wisconsin lightweight crew.

“I liked what [the 2V] did with the third 500. They stayed long, stayed composed, and did what they could to get the best speed from the boat,” said Miller. “We raced early in the season this year against Stanford and Princeton, and we really weren’t ready,” he added.  Since then it has been a lot of work, several line-up shifts, and training for these Sprints as well as the IRAs in a couple weeks.

Just a few finals later, the Lightweight Varsity Eights were locked on: Wisconsin looking to defend their long-standing ownership of the awards dock, and Princeton looking to re-establish themselves in a category where they have been challengers for years. “I feel like we are the underdogs,” said Paul Rassam, Head Princeton Lightweight coach, despite his crew’s top-seed and unblemished record this spring.

As the lightweights passed the grandstand, it was Princeton in the lead, winning the Varsity Eight, Wisconsin second, Radcliffe third. “It’s been a long time coming,” Rassam said. He greeted several recent alums who were spectating; for these women it had been a series of near-misses. Here at the 2011 Sprints, they watched their alma mater hit the mark.

“To do this at the final Eastern Sprints is a dream, just the perfect ending,” said Rassam of the team’s win. “We had line-up changes yesterday, [and] the way the team handled it was phenomenal. As coaches we thought we might have to pick them up to get them ready to race, but they picked themselves up. I’ve never seen anything like it, the determination they showed,” shared Rassam. “I wasn’t surprised; this has been the character of the team.”

The Wisconsin lightweights did take the win in lightweight four as well, and won the Konrad Ulbrich Team trophy for the best overall performance in the lightweight events. For Miller, the team title was bittersweet, as the varsity eight gold was not part of it.  ‘We’ve won it six years in a row, just not this time,” said Miller, “Hats off to Princeton, they rowed faster than we were capable of rowing today,” he added. “The girls were feeling the pressure last year at IRAs,” said Miller of the Wisco rowers who have had a target on them for their entire racing career. For Miller and the Badgers, it is back to work: “I am looking forward to the next three weeks of preparation for the IRAs.”

row2k's EAWRC Sprints coverage is brought to you in part by: