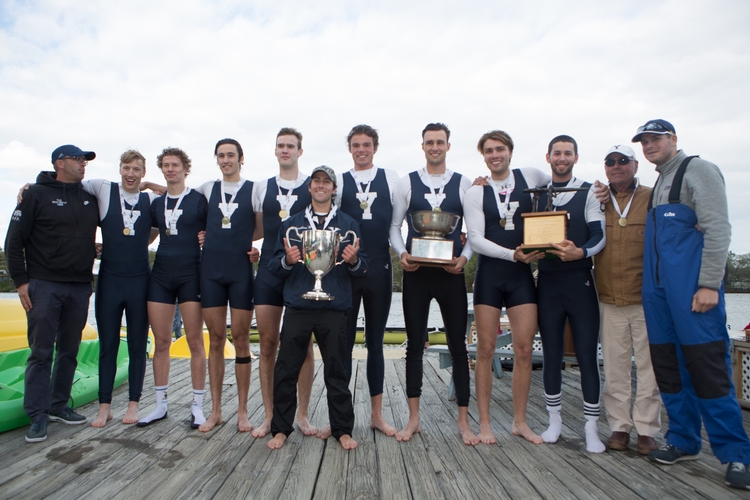 The Yale Bulldogs repeated as champs in the Varsity Eight, ended a 14-year title drought in the Lighweight Varsity eight (and took the Lightweight overall points trophy to boot), while the Princeton heavies medalled in four out of the five events to take the Heavyweight points trophy at Lake Quinsigamond, and that's not even a tenth of the story. Here's all the great racing that went down at Sprints today!

The Yale Varsity Heavyweight eight executed on the day, posting the fastest time for all crews on the lake at both ends of the day to repeat as Varsity champs, almost a full length clear of Princeton. Coming in for the bronze was Brown, who rowed a great race on the unfavored side of the course in a blustery crosswind that had been buffetting Lake Quinsigamond all day. In finishing third, the Brown crew reversed their loss to Harvard in the regular season and in this morning's heat, while Harvard, Cornell and BU rounded out the field.

While no one would say that the win was easy, you'd have to say that the Yale crew was in control at all times enroute to their second consecutive sprints title, and first repeat since the 1981-82 crews achieved it.

"I think the repeat is more difficult, you have to manage your emotions a different way," said Yale head coach Steve Gladstone after the race. "It's probably a little bit harder to achieve."

"Each title stands alone, each has its own satisfaction to it," said Gladstone, when asked to compare the last year's title to this one. "The process is very simply doing the work every day, getting in the boat and looking to refine what we do."

Harvard took the heavyweight 2V in the day's second tightest margin, taking the gold by .25 seconds ahead of Princeton, with BU placing third.

"These guys have had a very good regular season, but there have been changes in the lineup, so you never quite know the speed you have until you race them at a championship like this," said Harvard assistant coach Bill Boyce after the race. "It's very satisfying to see them maintain their regular season speed. It's a very young boat, with three freshman and two sophomores, and a coxswain who just walked on last year."

The Princeton 3V heavies also took their event with a young, excitable lineup, and Princeton assistant coach Matt Smith echoed the sentiments of his colleagues across the lower boat ranks. "It's a testament to how hard the team worked all year, it wasn't just those nine guys. They had a great race, there are five freshmen in there, so it's great to have to do it in a great race, and not just in an easy one." 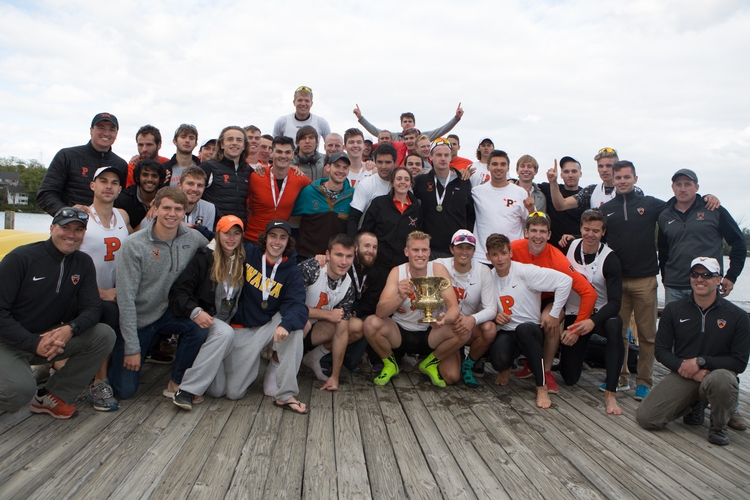 In addition to the win in the 3V, the Princeton Tigers took silver medals in the 1V and 2V to win the Rowe Cup, for overall heavyweight supremacy.

"This was the product of the efforts of every single athlete," said Princeton heavyweight head coach Greg Hughes, speaking about the challenges of getting great performances from a program five or more eights deep. "I think it's the hardest thing to do, and it's really satisfying when it happens, to get everyone firing on all cyclinders, all at the same time. I think those days in the trenches, in the deep, dark winter time, somebody brings you up, and that's the key to having that team depth."

The Yale Lights snapped a long-ish gold medal drought in the Varsity eight today, capturing the Wright trophy for the first time since 2002. On a day when the field, rowing in difficult conditions, ran just five seconds outside of the Lake Quinsigamond course record for the event, the fast-starting Yale crew got out early, as they have all year, and held off Columbia and Princeton for the win. 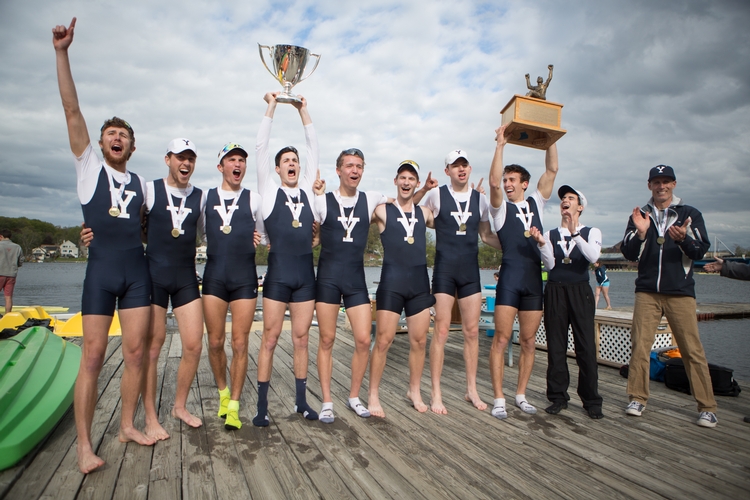 "A couple of years ago, someone asked [Cornell Coach] Chris Kerber how they achieved what they did, and he said 'Winter,'" said Yale lightweight head coach Andy Card. "Our guys have been great all year, and so I'll say the same thing Kerber said: Winter."

"I don't want to make any of my alumni angry, but these guys are up there," said Card, when asked how this year's boat compared to some of his past crews. "They're really consistent, and they're imperturbable. They blend really well together, it's kind of the classic story of how all good crews really are."

Longtime Philadelphia coach Bruce Konopka was on hand to day to hand out the medals for the varsity Lightweight eight; Konopka won that event at Sprints 40 years ago this spring.

The lightweight 2V was also won by Yale, in one of today's few upsets--and how; Yale beat top-seeded Cornell by just .08 to take it.

"That was one of the best races I have ever seen," said Yale lightweight assistant coach Ned del Guercio. "We're very excited, and every year it seems like the teams in the league get closer. All credit to Cornell also, that was unbelievable for the athletes. We're talking an inch, they're as fast as we are in any given race."

Princeton took the lightweight 3V today, just ahead of Cornell and Yale. 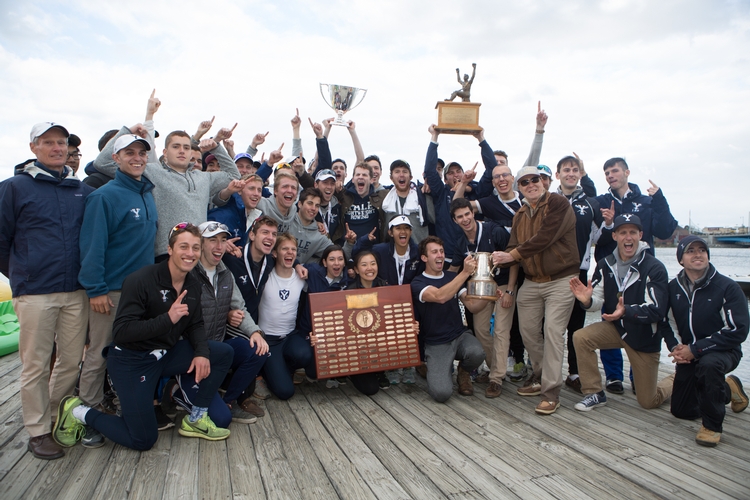 Team strength was on Yale's side as well today, as the Yale Lights captured the Jope cup for overall lightweight points. Today, the Jope Cup was presented to the Yale Lightweights by a delighted Jope family member himself.

"We had a senior stroke in every boat today," said Card. "That definitely made a difference. It's actually been a really enjoyable year, the guys were great. They're easy to work with, they're fun to work with, and I have been enjoying it quite a bit."

Lower boat wins today: Princeton in the 4V Lightweight and Heavyweight Eights, Cornell in the 5V Lightweight Eight and Navy in the 5V Heavyweight Eight. As programs have moved away from the "freshman-separate" model of team structure, and many teams are fielding in excess of five eights, more than one coach spoke about the importance of the lower boats in building a positive team culture on their squads.

"We talk about how learning how to win has to start somewhere, and for a lot of guys, it starts in those lower boats," said Navy assistant coach John FX Flynn, whose crew captured the 5V event at Sprints today. "It starts at that level and hopefully translates up as they develop. We have six walk-ons in that boat, and for us it's about team depth. With six or seven eights worth of guys pushing each other, without the freshman races now, that's how we develop our guys and our walkons long term. It means a lot to us to be able to bring six eights of guys here to the Eastern Sprints."

The best thing you could say about the big wind at Worcester today was that it stayed the same all day: a big cross from starboard.

The wind also gave us the best overheard call from the official referee radio channel today: "If someone sees the three-seat of the Princeton 3V Heavyweight Eight, tell him we picked his hat up out of the water." Thank you referees! 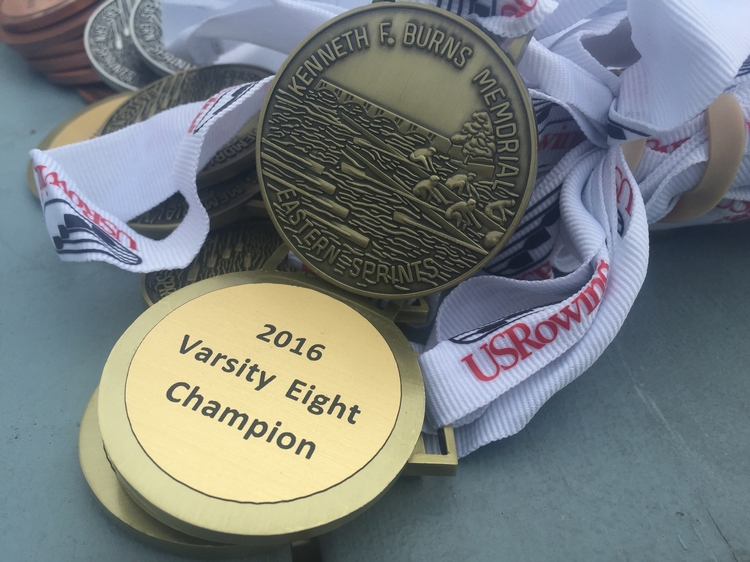 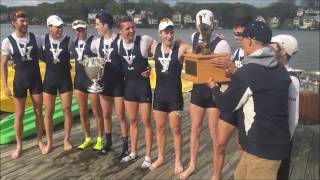 Sprints 2016: Sights & Sounds
row2k spends the day at the 2016 Eastern Sprints, on Lake Quinsigamond in Worcerster, MA.
back to top
EARC Sprints Features 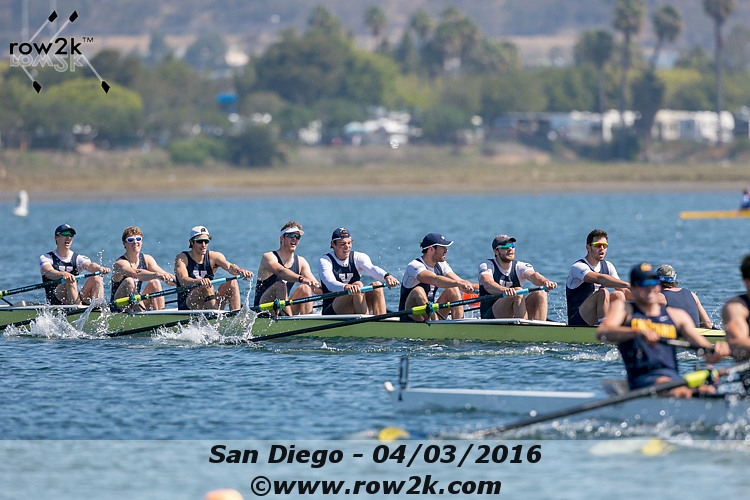 60th EARC Sprints On Tap
Get our Newsletter!
SUBSCRIBE
Support row2k!
If you rely on row2k, please support row2k!