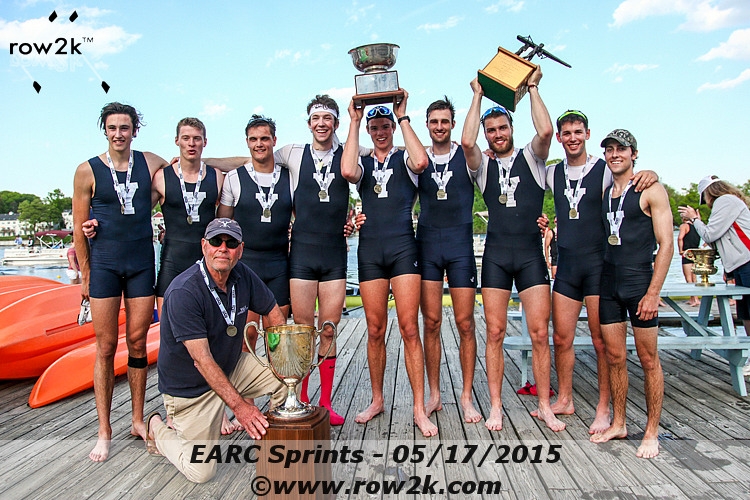 Tight margins, fair conditions, and new champions – it was a great day at the Eastern Sprints as parents, friends, puppies and kids in swimsuits lined the shores of Lake Quinsigamond to watch the men of the EARC race in their penultimate regatta of the season.

Princeton head coach Greg Hughes described the level of competitiveness in the Sprints league saying, "for many years there were just a few programs that you always looked at, and now just making the final of the Eastern Sprints is a great achievement."

The sun was scorching over Lake Quinsigamond and the wind was minimal, and the unseasonably warm conditions caused a few dehydration issues with athletes and spectators – a few of the rowers were guided off the medals docks by medics to rest and rehydrate. We send out well wishes all those athletes, and remind everyone as the temps start to climb – please, stay hydrated and stay cool when you can.

The last time Yale's varsity men won the Eastern Sprints, none of the guys in the 2015 crew were born, and most of their parents were probably still in college. In 1982, the Yale men won the (now retired) Worcester Bowl, and now thirty-three years later, their far-removed teammates crossed the finish line first to capture the Parker Cup. It's been a long time coming for the Bulldogs.

"This is something that we've talked about a lot over the past couple of years," said sophomore stroke seat Nate Goodman. "We weren't content with Yale being a crew that sat at the back of the B-final. We put a lot of thought into what we were doing –asking 'what will make the boat go faster?' I think that's what we were thinking about the whole time."

Head coach Steve Gladstone, in his fifth season at Yale, is no stranger to winning the Eastern Sprints. In his tenures at Brown and Harvard (lightweight), he led his teams to many Sprints wins. This year, to cinch his first Sprints victory in 21 years (during which time he coached at Cal, leading the team to 5 IRA championships, medaling 11 years out of 12, and served as the athletic director), he put together a young crew early in the spring season – two freshman, three sophomores, four juniors, no seniors – and watched them succee.

"They raced well all season, and they've been consistent in their performance," said Gladstone.

But despite their speed in their undefeated regular season, the championships are a different beast, and winning was never a promise.

"When you go into a regatta you have a sense of your own boats capability, but you don't have a sense of the other boats' speeds, especially with the gap between the end of the cup racing season and the Eastern Sprints. Given the fact that it was a late winter, I'm sure that a number of programs were sorting their lineups out. It was satisfying to see that their speed on the course was fast enough to win," added Gladstone.

The Yale men have a few more tasks ahead of them - the IRAs in two weeks, but arguably more importantly, the 150th Harvard-Yale Regatta on June 7th. The Elis have only won the race once since 2000, in 2008 by .5 second, and with a young and fast crew, capturing the win at New London is on their minds.

"It's what we've been talking about since September," said Goodman. "We want to beat Harvard."

As the winner of the varsity eight, Yale also won the Ivy League title, but didn't capture the Rowe Cup, the coveted team points trophy that went to Princeton after winning gold in the 2V and 3V and bronze in the varsity race – their first time taking home the cup since 2005.

"It's been a solid season overall for the squad," said Hughes. "We set a big goal for our program as a team – hoping to get better results from every single boat we have and I think that showed today.

"This is the first time we've won the 2V and 3V since I've been coaching at Princeton," he added. "As a team we have a higher standard and I don't think that's me, I think that's this team – and they have goals and ambitions. It's exciting to see them starting to achieve some of those."

The Princeton 2V win came on the heels of a 2014 silver medal, and the guys who were in the boat both years felt this victory was especially sweet.

"[Bow seat Trey Francis] and I were both in the 2V last year and came second to Northeastern so winning is a huge thing, and the points trophy is what we've been shooting for this whole year" said senior David Octeau.

Ryan Meder, 3-seat in the 3V, credited the inner-team competitiveness to the success of his crew and his team.

"What really got us to the finish line today was being able to row four boats across – 1V, 2V, 3V, 4V at practice and each boat pushing each other to the limit every day," he said. "When it came time to put ourselves in the pain cave today we were used to it from every day on the water this spring. We have such a deep program and guys at all levels are willing to push each other."

Harvard took home their only heavyweight gold in the Freshman race, taking home the gold after losing narrowly to Brown in 2014.

"The racing today was superb, Wisco put up a good race, the conditions were perfect," said rower Conner Harrity.

Cornell took home gold in the fourth varsity race and the Wisconsin 2F won the 5V/2F race at the beginning of the afternoon.

Reigning Jope Cup champions Cornell University took the cup back to Ithaca once again after a day of thrilling races that produced medals for all the Cornell crews, including gold for the 1V, 3V and 4V. As the varsity race came by the beach at Regatta Point in the sprint with Cornell bowball-to-bowball with Columbia, the roars of the crowd was deafening. The angle from the spectators' area at Quinsigamond is such that it can be tricky to determine results by sight alone on close races, but as soon as the Big Red crew crossed the line, it was clear by their celebrations that they had edged out Columbia. Their teammates, parents and fans went wild.

"Every day is a battle, every race is battle," said senior Katie Falb, who has coxed the varsity lightweight for two years. "Today was absolute war – and it was great. The final was crazy – we knew that Columbia was going to be coming after us so it was a fight right off the line. We jumped off the line and were two seats up on Columbia – then they pushed up a seat – we were going back and forth.

"Columbia put up really good fight and gained two seats on us during the sprint. We had a good sprint for what we've been training for, but they had a really good sprint," Falb added.

As the rest of the Cornell team streamed onto the dock to join their who had just accepted the Joseph Wright Trophy for the varsity race, there were hugs, whoops, and many small moments between teammates who had been working together for years toward this goal – not just a win, but a repeat performance, truly something to celebrate.

Head lightweight coach Chris Kerber celebrated with a jump into the lake, but is well aware that the season isn't quite over yet, and with tight margins all day, there's still work to be done before IRAs.

"Having everyone on the medals dock really shows what we've been working for the past 2-3 years," he said. "The leadership of the senior class has hoisted us to be able to do what we do. We've got two weeks until the IRA; it's still really close out there."

Harvard's second varsity lightweight prevented Cornell from a sweep when they edged them out to win the Cornell Trophy (irony much?). After a tough few races at the beginning of the season, the Harvard 2V lineup was changed, freshman were moved up, and the crew that crossed the line first at Sprints was a lineup that hadn't seen defeat since they have been together since mid-spring.

"They had rhythm – they just had it," said assistant lightweight coach Ian Accomando. "Coach Bartman and my job was to just let them do their thing, and clearly their thing was pretty fast. It was fun to watch them throughout the season get a little bit faster every week and grow in confidence and execute the race plan and defend their rank coming into the Sprints."

Navy took home the gold in the 5th/6th varsity lightweight race that was held this year – such depth in the lightweight programs is only promising for the future.

It wouldn't be right to report on the racing and ignore the hairstyles of regatta - long hair is in this year, with ponytails, buns, and headbands gracing the heads of many of the rowers. The Harvard varsity lightweight crew stern three all had very Euro-styled buns and one Cornell athlete even perfected the hair shake out. Maybe this is a good sponsorship opportunity for a shampoo company?

Over the next two weeks the men will head back to their respective schools where many will be faced with studying, finals, graduation, and lots and lots of rowing (and tending to their long locks). They'll meet again on Mercer Lake, joined by their West Coast competitors, for the IRA Championships on the last day of May.

EARC Sprints - Medals
back to top