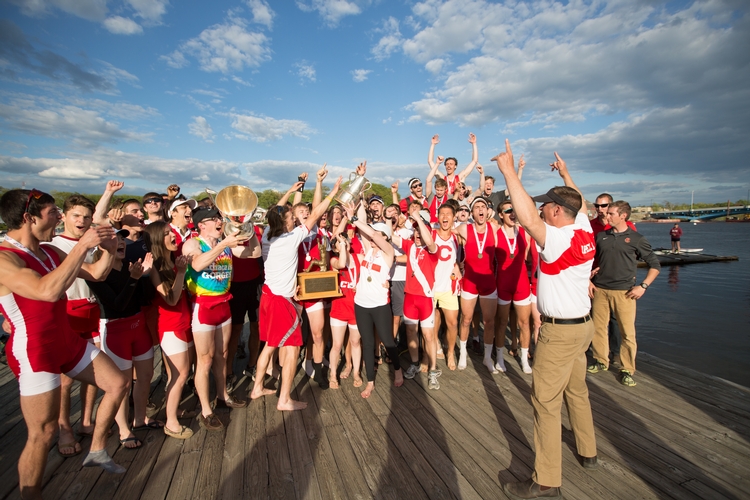 When Harvard and Cornell Universities were preparing their trailers for transport to the Eastern Sprints, it appears that each of the storied crews packed a broom to use when it came time to sweep up the big hardware.

The Harvard heavyweights and the Cornell lights each swept the big three trophies in their respective divisions with near record breaking performances in each of the varsity events and strong showings by lower level boats.

Harvard captured the inaugural Harry Parker Cup as the winner of the heavyweight varsity 8 event, the Rowe Cup emblematic of the best overall performance by a heavyweight program, and the Ivy league championship. Harvard and Brown University ended the day tied in points for the Rowe Cup for the second straight year, but the Cup will remain at Harvard by virtue of the Crimson winning the varsity 8 event.

Cornell took home the Joseph Wright trophy as lightweight varsity 8 champion, the Jope Cup which is symbolic of the outstanding overall lightweight program at the Sprints, and the Ivy League championship. In addition, every Cornell lightweight oarsman who raced in the events of the day returned to Ithaca with a medal. The Big Red last made the three trophy sweep in 2008.

Heavy Men
Harvard captured the heavyweight varsity 8 title for the second consecutive year and eighth time in the past 12. The Crimson was the second seed in the championship and missed the course record set in 2007 in the event by a mere .27 seconds. Harvard rowed a 5:27.27 to defeat fourth-seeded Brown by 1.2 seconds and take home the Parker Cup instituted this year as the championship trophy for the heavyweight 8 race. The Parker Cup has replaced the now retired Worcester Bowl.

The Cup, named for 51-year Harvard coach Harry Parker who passed away from cancer last summer, will reside in Newell Boathouse until next year's Sprints. The Crimson feel it is fitting that Harvard is its first home.

"It's special for all of us, because we got to race for the Harry Parker Cup and we nearly matched one of his records," a dripping wet Harvard coach Charley Butt said after his crew gave him a celebratory toss into the chilly water. "I know Harry would be thrilled. Somehow he knows. All of us on the coaching staff shared a number of wonderful years out here with Harry and the thrill of competition never diminished for him over the 50 years he coached. I feel like anybody that worked with him over the years is infused with that enthusiasm and appreciation for how hard these young guys come down the course after each other."

Barely a deck separated the top five boats 400 meters into the 2000 meter race. By 500 meters gone, Harvard had opened a two-seat lead over Northeastern and Princeton. Brown then made its initial push, rowing a strong second 500 meters and clearly moving into second several seats behind the Crimson. As the crews approached the finish line Brown upped its stroke rating, but Harvard held off the challenge. Princeton raced to third a length behind Brown, with Northeastern fourth. Despite failing to medal, the Huskies set a school record in the event with a time of 5:33.97.

The varsity heavyweight 8 grand final had an unusual seven boat start as the qualifying morning heat 2 was disrupted by a swan that chose to stop and linger in a lane between Boston University and Cornell with about 30 meters remaining in the race. Harvard captured the heat with a time of 5:35.12 just barely ahead of BU and Cornell in the two-to-advance, but the margin between BU and Cornell was so slight that the regatta officials and coaches agreed the fowl may have created a foul situation, and all three boats were advanced to the Grand Final despite BU edging the Big Red by .13 seconds.

In heat one of the event, seventh-seeded Northeastern qualified for the Grand Final by knocking off top seeded Yale University. The Huskies won the heat in 5:36.71 to 5:37.45 for the Eli. Third seeded Princeton and Brown earned Grand Final spots from heat three. The previously undefeated Yale crew seemed not to recover their bearings for the final, finishing sixth.

Northeastern has had the top-ranked second varsity 8 crew all season and he Huskies lived up to the billing. Northeastern cruised along in third position early in the six-boat race, but took the lead at the 500 meter buoy and held it straight through the finish. The Huskies 5:37.78 was good for a 1.05 second victory over Princeton with the Tigers edging Navy by nine-tenths of a second. The win is the first ever for Northeastern in the event, and the first gold medal for any Husky crew since a first freshmen 8 boat in 1978.

"We were a little bit more aggressive in the first 1,000," NU coach John Pojednic said. "They've gotten comfortable all year being behind in the first 1,000 meters them coming back in the second thousand. We've won a lot of races that way but today we felt we had to get out in front earlier and not use the second 1,000 to make up ground to finish the race."

Brown put on a remarkable finish to win the third varsity heavyweight 8. Northeastern led the Bruins by over half a length with 500 meters to go. Brown raised its stroke rating causing the Huskies to come back with an attempted move of their own. Brown then upped its stroke rating even more and rowed through the Huskies in the final 30 meters for a 1.18 second win in 5:37.25.

Brown edged Harvard by .62 seconds in the freshmen heavyweight 8 race reversing the seed order. The Bruno crossed the line in 5:38.14. Cornell placed third.

Light Men
Cornell proved it deserved to be seeded first in the varsity lightweight rankings by posting the best morning time in the heats, and then taking the Grand Final in 5:39.41 to defeat a relentless Yale by .93 seconds. The Big Red trailed the Eli by three seats at 500 meters, and led second-seeded Columbia by a seat. Cornell moved at 1,000 meters and took the lead from Yale by a seat. Several different boats took runs at the top two boats but only Yale was able to stick with the Cornellians. Princeton finished third by a half length, as Cornell missed the course record set by Dartmouth in 2007 by only .52 seconds.

"We were in the cross-hairs, we knew about it," Big Red coach Chris Kerber said after his ceremonial dunking. "We expected there'd be some heroism in the race, even on our part. This crew just figured out how to be a little more poised and a little more confident with every win that we've had."

All six of the top seeded boats advanced from the morning qualifying heats for the Grand Final. Columbia had the best morning row as the Lions came in at 5:46.58 and despite bettering that time by nearly five seconds in the afternoon, missed the medals by 0.2 seconds in placing fourth behind the Princeton Tigers, who had fallen twice to the Lions by nearly identical margins during the regular season but reversed that order on Sunday.

Columbia fared better in the second varsity lightweight 8, taking a nearly wire-to wire lead to finish in 5:46.82. The second-seeded Lions took the race by a length as Princeton and Cornell raged a furious fight for second place. The Tigers and Big Red traded the lead with each stroke over the last 50 meters with Princeton grabbing the silver by .39 seconds.

Columbia also won the third varsity lightweight 8 Grand final as the Lions rowed to a 5:55.84 finish and a half-length victory over Yale. Cornell was both seeded and finished third. Two gold medals and a convincing fourth in the V8 made for one of the deepest team efforts ever from Columbia.

Penn rallied from a third seed to win the freshmen lightweight 8 title. The Quakers covered the course in 5:43.72 to take a one-length victory over Harvard. Cornell again finished third.

Looking Ahead
Of the 10 seeded events in the regatta, five top-seeds managed to win their events.

"It was a great day with how hotly contested the heats were," Charley Butt said. "The last two major regattas, the IRA of last year and this race, the heats results were literally compressed within a second and a half.

"The conditions were fast, they were hot and we couldn't have asked for a better venue," Butt continued. "The spring season affected different crews in different ways. We have two weeks to go yet before we all meet again (at the IRA Championship at Lake Mercer in Princeton, N.J.), and then three weeks before the 'grand-daddy of them all' (Harvard-Yale). So more things are going to be happening, and everybody in the league in every event has to be on call that if you don't improve, it's at your peril. That's just the nature of this league right now. If you're not better, you're off the back." 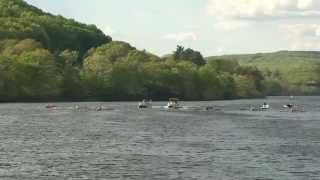