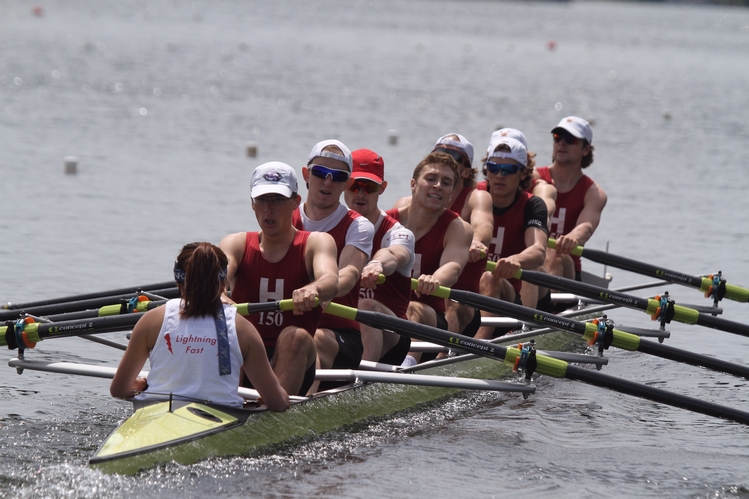 The Harvard VL8+ advanced on plan

Tight racing doled out equal doses of heartbreak and relief here on Lake Quinsigamond as the Men's Sprints finally got down to racing. There were a number of "upsets" from Lane 3: lower-seeded crews making a shambles of the pre-Sprints rankings, and sending a few well-regarded crews to the IRA-or-bust deathmatch that is the Petite final nowadays. What was missing was the forecast, and feared, cross-wind: racing today was on flat, fair water, six lanes wide.

Two quick background notes here: first, the racing lanes are seeded from 1 to 6, so any lane three winners on the heavyweight side of things were the #3 seeded crew in that heat. Princeton--finding some new legs perhaps here in May, sent Northeastern packing to the Petite from Lane 3 in the first heat of the Varsity eight, while Syracuse trumped Cornell in the second. Even the third heat saw the seedings tossed out, as Wisconsin took the win inn lane two over higher -seeded Navy--though, at #4 and #3 and bound for the same heat regardless, the Badgers and the Mids rankings were a bit of a toss-up coming in to the racing here.

Second note of import here: the IRA bid process was driving more than one crew down the course here, and here is why. Only the top 9 V8s at these Sprints get a guaranteed bid to the IRA, so making the Grand punches that ticket, while a fifth place--and a trip to the third level--all but ends the season in heartbeat. So the racing for second, and the racing for fourth was tinged with desparation out on the course, and some crews were left positively gutted by the end of the heats.

Making that 1V Grand--and getting the IRA all taken care of--in strong fashion were Harvard and Brown, who both powered away to what amounts to a "comfortable" margin these days: about a length. Wisconsin played the same card early in their heat, getting out to a bit of open water of Navy and early leader Yale, but the fisticuffs between Navy and the hard-charging BU crew ate up nearly all of that margin in the final 500 meters. Navy outlasted BU, or outsprinted them, depending on your vantage point: both crews put on impressive bursts as they sped past the beach. Princeton, as noted above, came down the course like a reborn crew: the Tigers are back, and knocked Northeastern back down into the petite despite all the Huskies promise thus far this season. Syracuse, who pulled this trick at last year's IRA, looked every bit a Grand Final crew after a quiet season to round out the field.

The Light Men's V8s had fewer seeding shenaningans: the top three in each heat advanced, but the margins from the final qualifying spot (3rd) and a trip the petites, were tight most of the way. In heat 1, Harvard won another round of H-Y-P's, with the Tigers taking second (again) and Yale third. Navy, in a bid to salvage a rough season so far, pressed Yale pretty hard until the final sprint sealed things for the Elis by about half a length. Dartmouth had, if anything, an easier run to the final--and the Big Green looks comfortably poised to make a run at the Crimson in the final. Cornell took second, after Georgetown struggled a bit through the middle with Columbia instead of going with Dartmouth and Cornell. Columbia could not finish the Hoyas, though, and Georgetown escaped into the Grand in this one.

The Heavy JV heats went Harvard and Brown, over Syracuse; Wisconsin strongly over with Navy, over Yale; and Princeton--another Tiger crew surging into their speed--with Cornell, over Northeastern. Brown was the only "low seed" to advance, dealing Syracuse a dose of its own upset medicine, but with all of Bruno's crews on pace for the podium today, it is hard to call that result an upset.

Light 2V heats went to Princeton, with Yale and Dartmouth, and to Cornell, with Navy and Columbia--the Lions there in the 3rd spot maybe the one surprise, given that they topped Harvard to do it. That result was forecast in the seedings, but seeing any Crimson crew miss out on a final here today is a rarity.

The Frosh Heavies had a few interesting results, starting with a Princeton crew that took a much closer second to Harvard in the first heat. Both advanced, but the Tigers are definitely back in the mix. In heat two, Cornell put themselves on the pole position with the fastest time, but Navy blew through Wisconsin to advance despite being an 8th seed. Brown followed the same script in the next heat, letting a strong Northeastern crew go on to win but using the magic of Lane 3 to send Yale to the Petites.

The Light Frosh went to Yale, Cornell, and Navy in heat 1, in that order, while in heat 2, Princeton took it, with Harvard, and Dartmouth's 1FL put the lie to any idea that there might be any favored lines, by taking third out of lane 5.

The Heavy 3V's raced heats in the morning as well: Brown, Navy and Cornell moved on in the first; Harvard, Wisconsin, and Princeton in the second.

Also in the morning, Harvard's 2FL's and 4V notched the first Crimson wins of the day in those straight final, but the 4V Heavies had to earn it against a Navy crew with the temerity to lead the race for a good 1700 meters. There was an open four's race, too, won by Columbia. 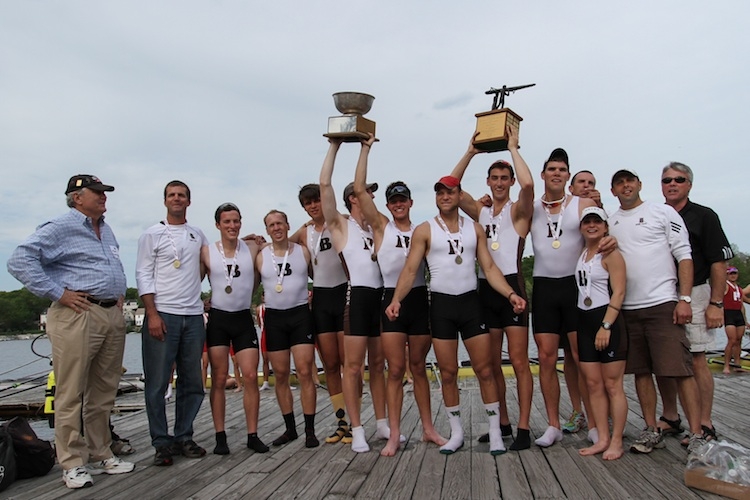 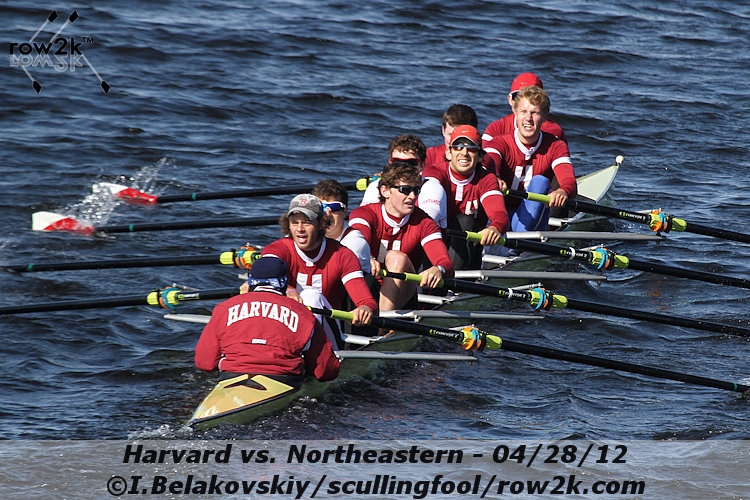 EARC Heavies: Can Harvard be beaten? 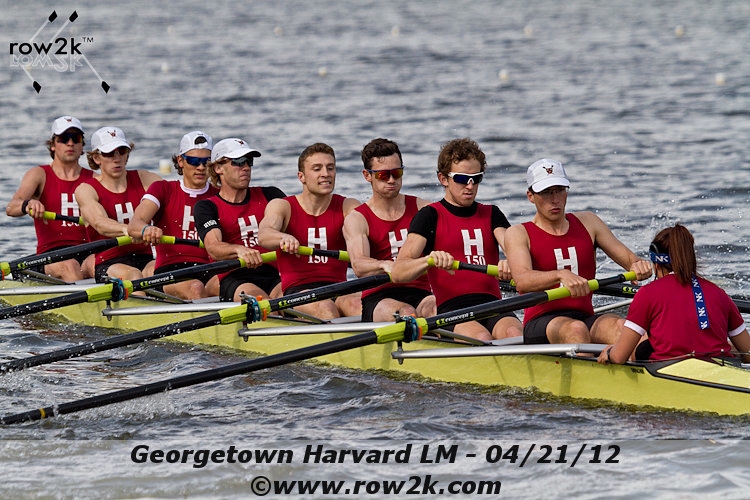 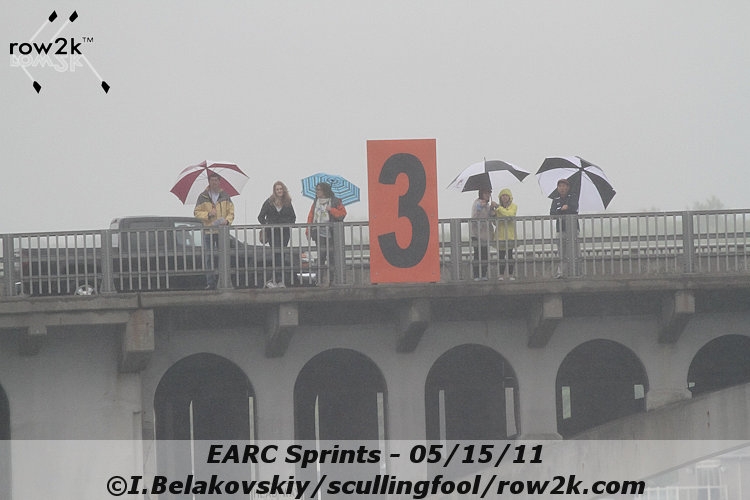