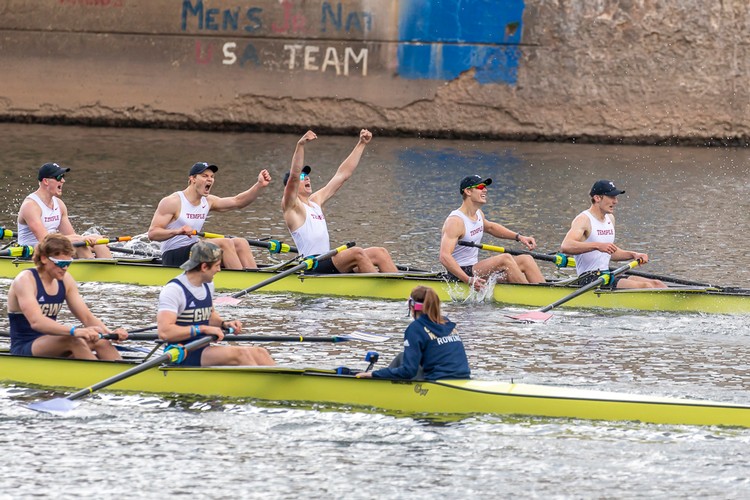 As rowing folks know, it has been really hard to pull off bigger rowing events in the northeastern US this year. While coping with travel restrictions, training constraints, and the general strain on training in a team setting, especially for smaller or less well-established teams, pulling off a big traditional regatta like the Dad Vails seemed like a stretch at best.

But the Dad Vail organizing committee made it happen; they compressed the racing schedule to a single day, ran a strictly enforced, spectator-free event in one of the most sports-mad towns in the US, and in the end, provided a championship racing opportunity for over 1100 athletes from 45 teams.

Temple Men Get the Win...by a Smidge

The Men's Varsity eight was a barn-burner, with Temple, Drexel, and George Washington, racing in an unfavored outside lane, trading blows; at the top of the island, Temple seemed to have it in the bag, but a huge push by GW took it down to the wire. At the line, it was Temple by just over a second.

"This was the outcome that we worked two years for, and it did not come easy," said Temple coach Brian Perkins. "This was the hardest fought Dad Vail final I have had as a coach and my hat is off to the other finalists."

Reflecting on the long journey from the last Dad Vail, in 2019, Perkins said his team found meaning in working for this goal.

"Honestly, it felt like validation," he said. "All year, we asked the men to make all the usual sacrifices that go along with a typical year. Then we added all the additional restrictions and sacrifices and temperature checks & testing due to the pandemic.

"We asked all of this with the memory of a canceled regatta still fresh in our minds and no guarantee of a 2021 Dad Vail, until late March when it was confirmed.

"So the men acted on faith. Faith in the program, faith in each other, and faith that it will 'get better.'"

It was a bittersweet, almost-victory lap for the runners up from George Washington, who will see varsity level support for their team discontinued at the conclusion of this academic year.

"This is our 'grand final' year as a varsity program and the team knows that we do this as 'all of us,' no boat matters more than any other," said coach Eric Gehrke, who in addition to coming second in the 1V saw his 2V win, and his 3V finish third. 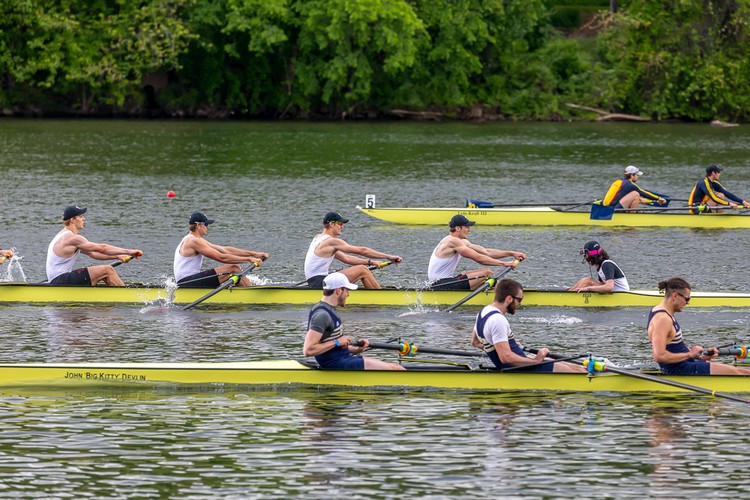 The GW 1V, near lane, pushed Temple to the line

"In this year, we are trying to stay focused inward on ourselves as a team and our process of improving how we row. This weekend was no different, we had a lot of variables thrown our way and did what we could to stay inside our gunwales and do what we knew we could in the finals. Our 2V has shown speed all year so the expectation was high.

"We have a lot of respect for the Philly teams and knew Temple had speed in the 1V so were ready to bring another gear for a dog fight in that final. Our 3V has been steadily improving and we are really proud of how they found more speed in their race."

With a close win over the Princeton Lightweights in the 1V, a win in the 2V, and a close second place to local rivals Temple in the 3V, the Drexel women were the class of the Open Women's field. 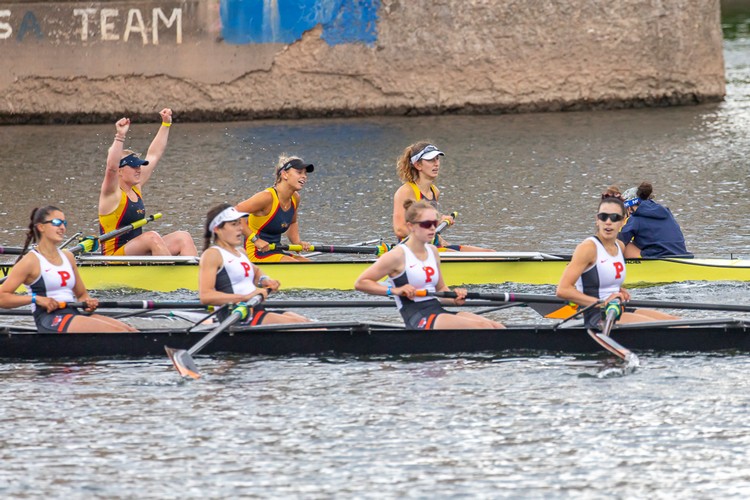 Drexel's women celebrate a big win in the V8

"The land looked a bit different without the tents and alumni but the competition on the water was still fierce," said Drexel head coach Paul Savell.

"It was great to see so many teams competing yesterday."

Princeton Women Own the Small Boats

Racing more like a small, tightly-focused high school team than the accomplished eights team they are, the Princeton open women showcased their pandemic small boats training with wins in the Single, Pair, Double and first & second place finishes in the Women's Varsity Fours.

"This was such a fun day," said Princeton coach Lori Dauphiny. "We are so grateful that the Dad Vail Regatta and member organizations not only allowed us to race but helped to make this happen! It means so much to the student athletes and staff. We had nowhere to turn after a late start to the season and COVID limitations. The Dad Vail organizers worked with us and made racing in small boats and fours possible." 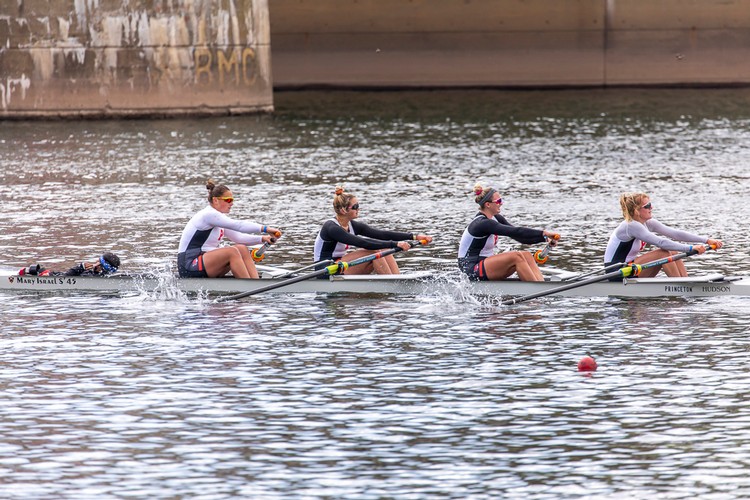 "The team was up for the challenge and excited since they have spent a good amount of time training in small boats this spring. The hard work paid off! The team came ready to give it their all.

"I was really excited and thankful to come back to the Vails, as it was the first championship I attended as a collegiate coach in the 1980s. It was great to see so many of the traditions are the same, including the yellow jackets and even many of the same people."

Dauphiny probably spoke for many collegiate coaches when she reflected on the resilience required of student athletes by the ongoing pandemic. "We are very proud of this team and what they have overcome and their ability to stay strong in such challenging times!"

"This was a really tough spring for us with COVID and all the restrictions," he said after racing. "Finding out earlier in the season that the Dad Vail race was still on was definitely a motivating tool for everyone. A large portion of the team did not come out of quarantine until just this past week and for some this was their first race of the season." 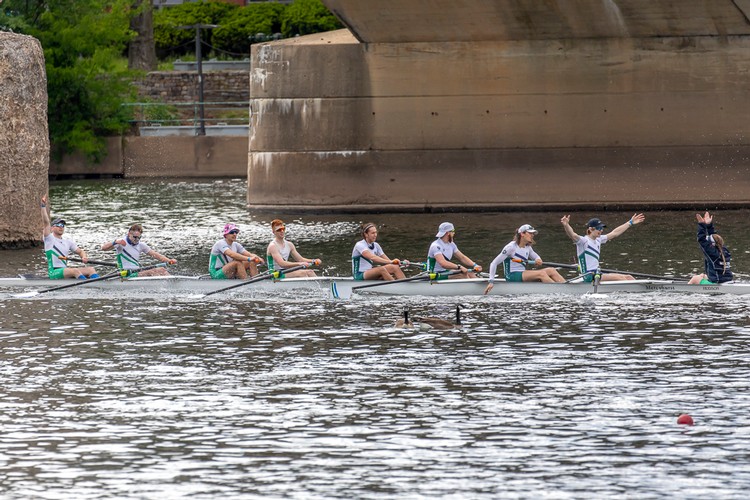 Mercyhurst celebrates the win in the Light Men's 8+

"We felt as a team we were dealt punch after body punch, but no matter how many times we got knocked to the ground we were going to get up and keep fighting because that's what we do," continued Spracklen, whose team won the Men's Lightweight Eight, the Women's DII Eight, and the Women's DII/III Four. "The expectation is we train to win and we race to win and if we don't win it's not because we didn't give our best effort. Everyone embraces their role on the team and makes the best of it."

Drexel, who had a six year streak in the overall points trophy snapped by Temple in 2019, came out on top this year. Temple's heartbeat win in the 1V also cemented their first-ever men's team point trophy win; the Owls put all 61 athletes that competed at the Dad Vails into a Grand Final. Princeton, on the strength of its small boats, took the women's points trophy.

With thirteen crews contesting A-Finals, and 11 of them winning medals, Drexel's overall points win is not really a surprise; still, an impressive feat. 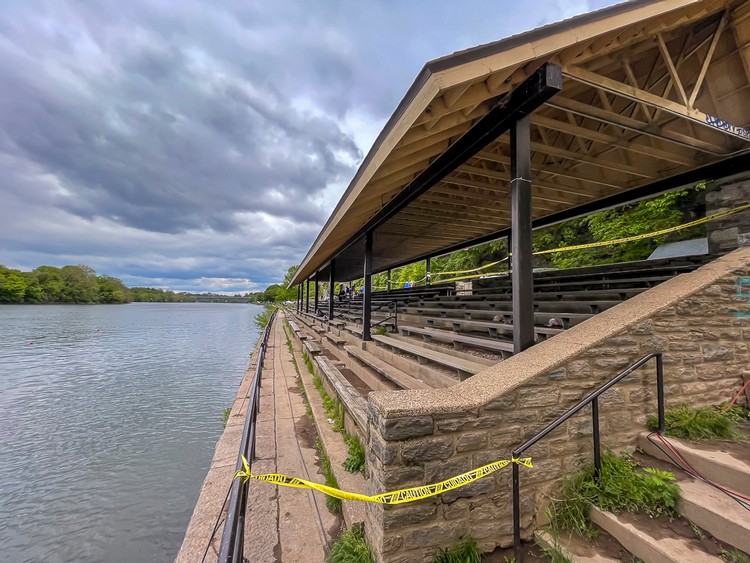 Day after the regatta? In 2021, it's day OF the regatta
Related Photo Galleries 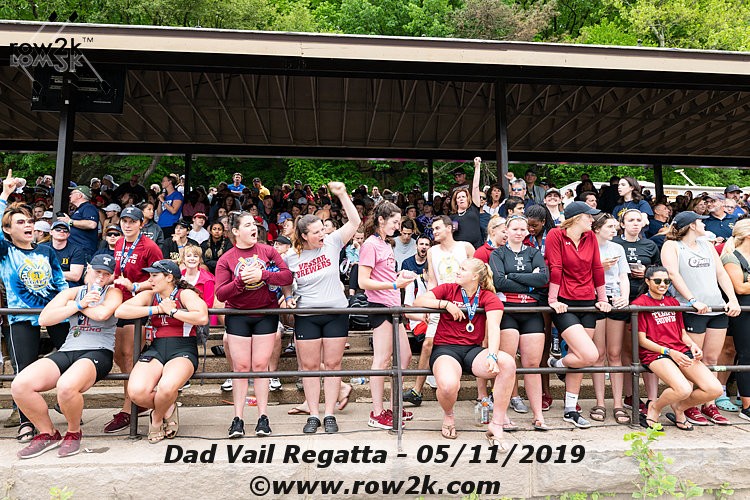 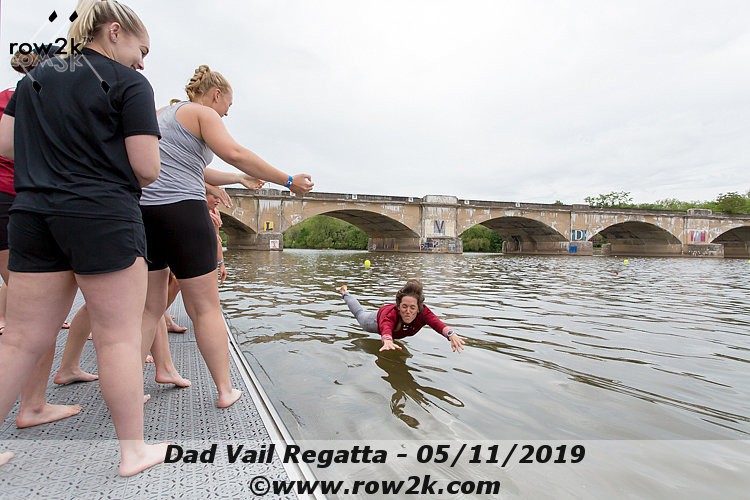