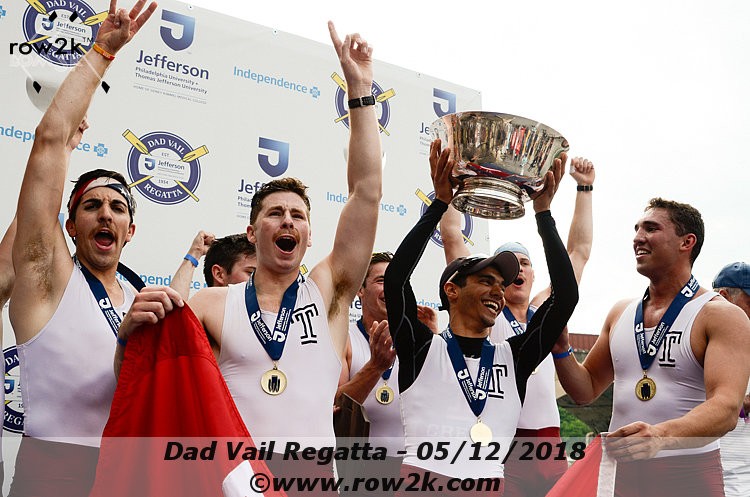 The Temple MV8 won Vails for the first time since 2004

While the rowing world still sometimes equates the Temple men and V8 wins at the Vails as one and the same, it has actually been some time since a Temple varsity men's eight took gold at the Dad Vails - 14 years in fact, dating back to 2004.

Coming into the weekend, it did not look like that was going to change; Temple had suffered big losses during the regular season, including a couple 11-second losses to rival St. Joseph's, and the V8 was not really slated to spend the last minutes of the event tossing their coxswain and coach into the Schuylkill, and then doing flips into the river themselves.

And it wasn't Temple's first win on the day; they had already won both the JV8 and Frosh men's eights.

After watching his crew race to a win in the Gavin R. White '73, Temple coach Brian Perkins, himself a product of Temple's best years, tied this year's victory to those of the past.

"We had a dinner the night before the racing where they honored the 25th and 50th Anniversary Crews, and 25 years from tonight, they'll be honoring a Temple crew for the 50th year, and this crew for the 25th year.

"This is the house that Gavin built; Gavin made this all possible," Perkins said. "Gavin recruited me back in 1988, I rowed for Temple, and was the captain for Gavin's team. It was humbling to be among guys that were such good, intense rowers here, and they always punched over their pay grade. When they got to the IRAs and did really well, I was proud to be a part of that group, and they're still good friends of mine. And Gavin is still here; Gavin is our head coach emeritus and goes out in the launch whenever he can, and I still learn from the man.

"If I could even in just some small way replicate what Gavin was able to build here, that's what I want for these guys." 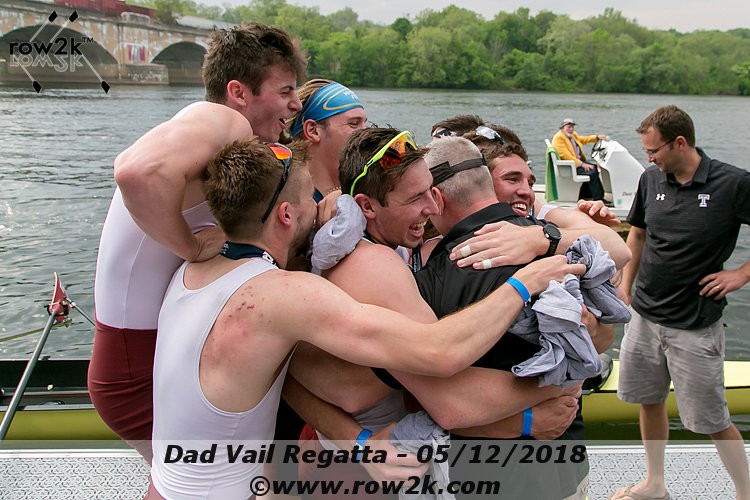 It wasn't an easy time marking their first win for posterity's sake; the crew had a difficult year, and Perkins himself had a notably difficult run-up to the championship.

When Perkins and the V8 finished high-fiving and hugging one another on the awards dock, one of the crew members reached into their hull to detach a small photo that was taped to the hull, and presented it to Perkins. In the emotional moments that followed, Perkins realized they had put a Mass card with a photo of his mother Catherine in the boat during the race; Catherine Perkins had passed away 10 days previously, on May 2.

"This has been the best and the worst week of my life," Perkins said. "I tried to keep the fact that she was sick secret from the guys; I just didn't want to be a distraction. It's their senior year, and I didn't want to mess with that, but they found out and the team has been awesome. The Temple family has been awesome, my staff has been great covering for me. And here we are."

Perkins credits a slew of seniors with the ability to rally both under duress and as a team.

"We're trying to rebuild that culture and start a fire, a fire that's a little bigger then was there. And we have, we're now coaching the Temple guys and they know what it means to be a Temple guy now.

"This year we had a lot more seniors, a lot more leadership, and a lot more team cohesion. These guys all wanted to win. They wanted to win individually, they wanted to win for each other, and there was no deficit they felt like they couldn't overcome in the erg room, in the weight room, on the water. We lost to some of these crews by 11 seconds twice this year, but they never saw themselves as out. They were always in the fight." 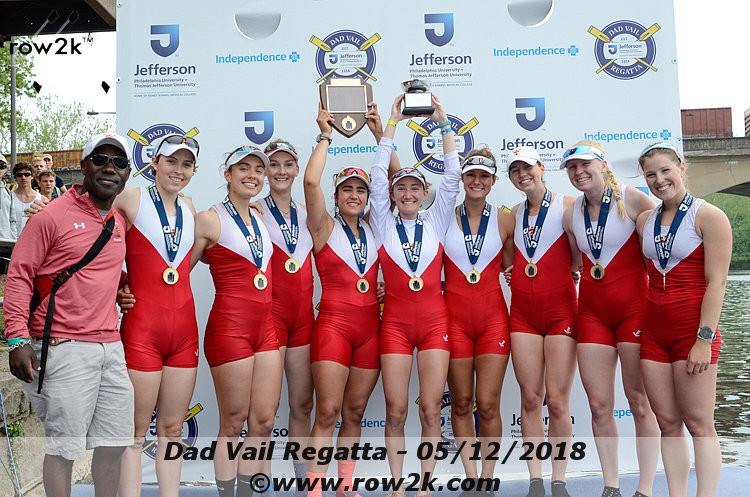 Boston University Lightweight Women Play Giant Slayers
The Boston University light women punched up a weight class to impressive effect to take the varsity women's eight championship by a solid patch of open water over silver medalist UMass in second and Fordham in third. Like Perkins, BU coach Malcolm Doldron cited his own former coach as well as the special elements of the Vails as both challenging and good for the crew.

"The Vails is really an amazing regatta," he said. "This is the regatta that I used to come to when I was at Marietta College coxing under coach John Bancheri who will be leaving GVSU after 13 years at the helm, and it is really always a special place for me now. He taught me how to be a student of the sport and how to prepare a crew to race at a high level; there's not a better teacher in college rowing. He understands how to challenge a team to be a better and how to support each athlete along the way. Most importantly, he always stayed true to his roots and who he was. It was special to see our crews compete against each other in the grand final of his 36th Dad Vail, and I look forward to seeing him back on the podium again soon." 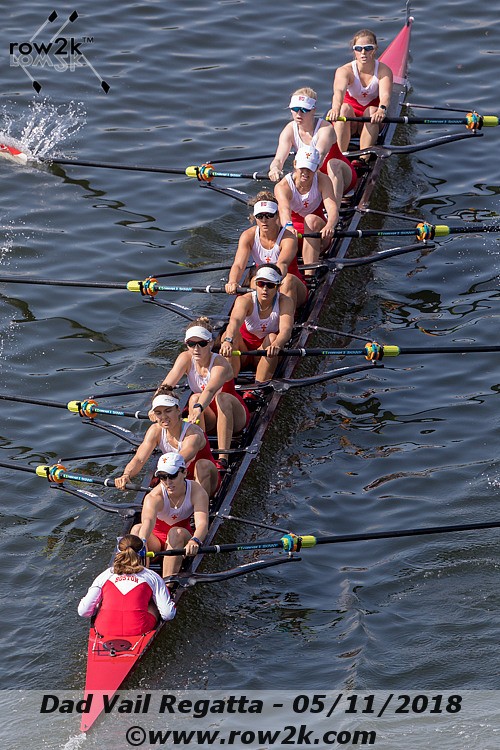 The BU Lightweights in action

Doldron noted that the Vails gave his crew a chance to get a lot of racing in during what might otherwise have been a long dry spell ahead of the IRA Championship in June.

"It's a great weekend to be able to get a time trial, a semi, and a final in, and it is a tricky course that has something for everybody," he said. "You have a turn for the coxswains, and you have to put yourself in the right position to end up in a great lane. It adds a little bit of uncontrolled variables to it that I like, and it's a great atmosphere to do this, and then go get ready for the next one."

Doldron credits the crew's approach to practice with their ability to rally through an intense weekend of racing.

"It comes down to practice and the kind of intensity and the kind of standard that we hold in practice," he said. "Practice is sacred for us. We know that if we can push as hard as we can on practice day, it makes the race day a little bit easier.

We tried to keep them on their toes and throw some different looks at them during practice. The more that we can introduce things that they can't control in the practice environment, the more that they just get used to it. They're not going to execute it all really well but they're going to get better at embracing the unknown so that when it happens, they're ready for it. They've been able to put some great races together, and hopefully we can finish it out strong." 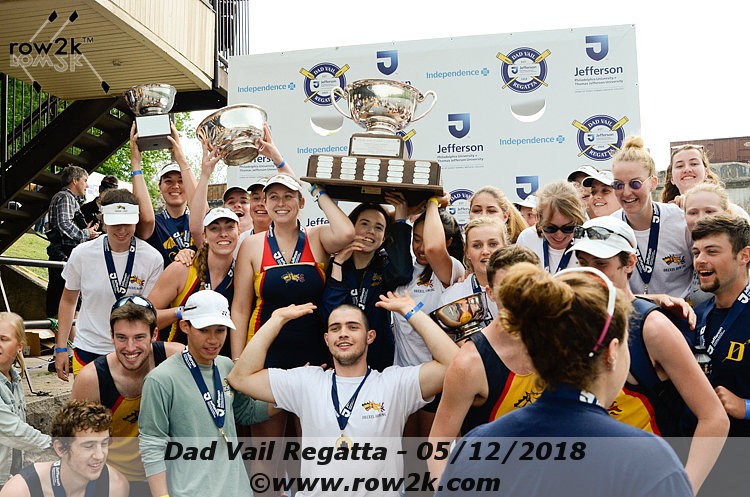