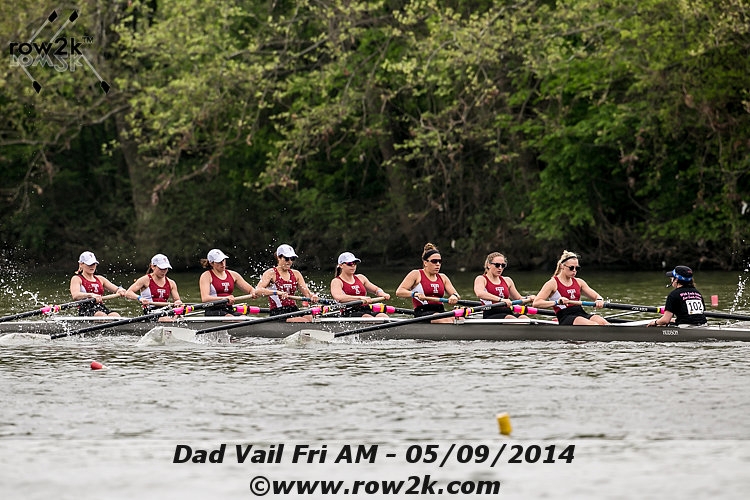 The 2014 Dad Vail regatta has come to a close and what an event it turned out to be. The build up to this year’s regatta had a slightly unusual feel to it because of the drama surrounding the dissolution then re-instatement of Temple’s rowing team, followed by truly epic flooding earlier in the week. This year’s regatta was definitely one to remember!

The Storm
To review, the Schuylkill River faced severe flooding last week after a storm dropped nearly 5 inches of rain on Philadelphia between April 30th and May 1st. Once the water receded, the venue was covered in mud, debris, and trash from the storm. The City Championships, which were supposed to take place last weekend, had to be rescheduled for later this month due to the flooding.

Row2k spoke with Al Wachlin about the cleanup effort. Wachlin is usually the one you see driving up and down the courses both on the Cooper and Schuylkill during regattas making sure the courses are tuned up. He said they have been cleaning up debris all week, including trouble finding and replacing the anchors for the racecourse due to all of the sediment from the flood. Coxswains and scullers thoroughly appreciate buoy lines, so we are all very thankful he was able to get the course installed. Fortunately, after a weeklong effort that continued during the regatta, the Schuylkill was ready for the Dad Vail Regatta.

Temple’s Resurrection
Back in December, Temple University made an unexpected, closed-door decision to consolidate its athletic department for financial reasons. Consequently, rowing along with six other varsity sports were to be axed after the 2014 season, making the 2014 Dad Vail Regatta the swan song for the Temple Owl’s rowing team. As it turned out, the backlash was a bit larger than the university was prepared for. In the words of Temple senior Ali Watkins, “the rowing community exploded!” A petition went out online to save Temple’s rowing program, and nearly 15,000 signatures came in from around the world. “From the UK to Australia people were supporting Temple rowing,” said Watkins.

“The coolest part about today is, back when the team was cut, we assumed the Dad Vail would be the bookend to Temple’s rowing history," she said. "We weren’t only upset because it was tainting our senior season, but it was seeing the potential of the novice class and knowing they didn’t have a future. I think the cuts were a positive influence on training. To know something is your last moment, you to have to grab on to that moment and give it everything you got. The cuts really propelled us forward. This was probably the best training season we have had. I think the results from today with 3 boats in the grand finals speaks to that."

Kara Carson, a senior with Watkins in the varsity 8, added “We all row for the Temple T, but when the team was cut, we didn’t feel connected to the university. We weren’t rowing or training hard for Temple, we were training for each other, and that is a far for powerful motivator. I think that motivator has stuck with this team and I think it’s going to carry it forward.”

On February 24th Temple’s board of Trustees decided to reinstate the men’s and women’s rowing teams. I think I can speak for the rest on the rowing community in saying we are all thrilled Temple rowing will now be around for many more years to come!

The Regatta
The first day of the regatta was fairly uneventful, save for a swift current that helped produce some quick times. Of course a pair flipped, and out of shape coaches struggled to run from the finish line to the recover dock, but for the most part everything was normal. Come Day two however, things went a bit sideways as the day went on.

The morning began “normal” enough, with slightly overcast skies and humid weather. After the morning semis were finished, the single scullers kicked off the afternoon finals with a lot of emotion as rowers crossed the finish line. In a very classy move after winning the collegiate women’s 1x, Liz Mathews from OKC stopped the other women in her event from leaving the awards dock. She pulled them out of their boats so they could share the awards podium with her. Finals continued with the usual line of parents with iPhones fighting for the best position for pictures from the grandstands. For the most part, the parents may have been more excited about the results than the rowers; good pics are great, but there is no need to fight folks!

Next up was the men’s pair, and this is when the 2014 Dad Vail Regatta began to get a little weird. Lane’s 5 and 6 are usually known as the lanes where rower’s hopes and dreams go to die, but not today. Lane 6 (Clarkson) got first and lane 5 (Iona) finished second. By time the Women's JV 8 made its way down the course, the head wind was so strong that the lane numbers hanging above the course were virtually horizontal, with the times in the eights more resembling a four’s pace because of the wind.

The chop generated from the wind producing some very challenging race conditions during the men’s JV 8 as well. Drexel’s men’s JV 8 was able hold off Michigan and Temple through the chop with some assistance from some saran wrap around their bow pair’s riggers to keep water out. FIT was not as fortunate as they crossed the finish with their bow almost completely under water.

The 2014 Dad Vail Deluge Arrives
When the light women's 4 came down the course, the sky opened up. Everyone ran for cover, and the already dense crowd under the grand stands became even more condensed. The rains eased, briefly offering what would be a false sense of security that was short lived as a squall came through at the start of the varsity women’s 4 race. To give you an idea how strong the winds were during the women’s 4, Bowdoin, who crossed the finish line first rowed a 7:06 during their heat, rowed 9:09 in winning the final. UMass head coach Jim Dietz was following the race, and noted “the varsity 4 race had to be the worst conditions I have ever seen in my life. You can ask any coach on the bike path, they could not see the boats on the water.”

Bowdoin’s 4 was comprised of Courtney Payne, Emily Martin, Mary Bryan Barksdale, Katie Ross, and cox Sophie Berube. Speaking with the rowers after their race, senior Katie Ross put it best, “the race conditions were biblical.” Coxswain Sophie Berube had to bail water out of her seat during the race and due to the ferocity of the rain coming at her, had to keep her eyes closed for large portions of the race. The rowers said “it felt like a million knives were hitting our backs.” Despite the terrible conditions, everyone remained in good spirits. Sophie even said during the race “Maine loves rain, this weather was made for you girls.” After the women's four crossed the finish line, the regatta was put on hold.

Varsity 8s
After roughly a 3 hour delay, the Dad Vail continued in idyllic conditions, and you would not have been faulted to have been looking around for a dove with an olive leaf. With almost glass flat water, the primetime events made their way down the course. For the lightweights, MIT owned the 8s, taking home gold in both the women’s and men’s light 8.

In the women's varsity eight, UMass took home another gold over Drexel and last year’s champion Grand Valley. Having earned an automatic bid to NCAAs last week after winning the A-10 championships, the momentum continued this weekend in Philly for UMass. “It was tough after the A-10 Championships last week” Dietz said after the race. “We didn’t even bring our boats home because we knew how bad the river was going to be. When we did get out on the water, we only rowed in singles and pairs. On top of that, with exam week and graduation it was tough.

“This is our last stop before NCAA, and it’s a great stop for us," Dietz continued. "We got in 3 really good races in some pretty challenging conditions, which will help us to prepare for Indianapolis. I am really pumped up, we are a young team and we are only graduating a few.” Coach Dietz’s excitement was clearly evident as he walked with his rowers back to the trailer singing “if you are happy and you know it clap your hands.”

In the men's eight last year, Michigan had a tough race finishing in 3rd; perhaps in response, this season they really hammered the start wanting to dominate the field early on in the race. By the 1000 meter mark, Michigan had established a boat length lead over the field. In an attempt to reel Michigan back in, FIT held a 39 for the entire second half of the race, but were unable to pull through Michigan; FIT took silver, and Virginia bronze.

Michigan MV8 member Louis Schaljo said “we had a shaky heat, a better semi, then just came out and pounded a 1k for the final. We just tried to hang on through the finish because we know FIT and Drexel like to throw down.”

It has been a tough winter for many of the northern teams because of the exceptionally cold weather, but Schaljo thought all of the land training made a huge difference. “This year we just put in the extra work over winter break, so we really just had that extra advantage in power this year, which is really paying off at this point of the season.”

Despite the floods, squalls, and delays, the 2014 Dad Vail regatta was an overall success. Hopefully next year will be slightly less eventful, but it wouldn’t be Dad Vails without a little bit of drama.

back to top
Get our Newsletter!
SUBSCRIBE
Support row2k!
If you rely on row2k, please support row2k!