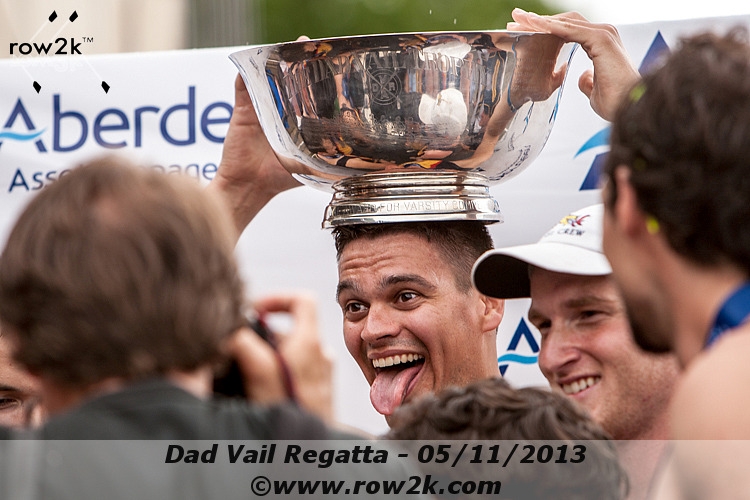 A full day of semifinals and finals at the 75th Dad Vail Regatta began with clouds and the threat of thunderstorms, to the extent that the scheduled changes were made at dawn – changes that would keep coming throughout the day as the weather conditions tried but failed to stymie the crews from their Vails championship pursuits.

As the day continued, the clouds came and went, but while the heavy rain stayed away, a barreling cross headwind picked up throughout the day and made everything from alignment to keeping the lane lines together to simply racing difficult. In the men's varsity heats, one race was called back after it was started misaligned, and other races were delayed because of debris on the course. It was a tough day for the officials and crews alike out there.

Despite the weather related mishaps, the racing was the focal point of the day and it was quick and exciting, and teams from as far north as Ontario, Canada and as far south as Florida sped down the course to capture some hardware. At the end of the day, Grand Valley gathered the wins for the women's points trophy, while Drexel led the way to score the men's and overall points.

Racing on their home course, the Drexel men and women cooled off from a number of their final races on the medals dock, winning four golds, a silver and a bronze. With each medal, the Drexel faithful grew louder as they cheered for their home team. The men and women supported each other unfailingly; all day the stands were full of parents, friends and fans. The team was united in one goal: Drexel dominance.

The Aberdeen partnership permeated all aspects of the regatta, but none as significant as kilt-clad CEO Danny Marshall. Spending the day on the awards dock, Marshall took a lead role in presenting medals and trophies to the top crews.

Drexel dominates early
Drexel started their day of success with wins in the men's freshman 8+ and the women's JV 8+. The men fought out a sharp sprint to earn the gold, and as they stood on the podium receiving their medals and posing with the trophy, their female counterparts sprinted toward the finish line. The men turned from the photographers and cheering parents to root for their own team. It was a moment shared by both boats as the JV men celebrated the women. Coach Paul Savell described the feeling of the team: "We've been undefeated, and picking up speed all season. We had our best race here; that was the plan."

Replacing the men on the podium were the Drexel JV women, who won the event for the second year in a row. "I think from the first race, they just got together and were determined to have a building season with an eye on retaining this trophy," said coach Denise Julian.

Driving the Dragon women was coxswain Catherine Hamilton, a Philadelphia native. Hamilton described her boat as having an "underdog mentality with the confidence of the first-ranked."

The Philadelphia based women were all filled with pride at the performance they could present on the home-course. "My city, my river. We know this river like the back of our hands," said Hamilton. She and her teammates looked forward to next weekend's CAA regatta where they will face Boston University and Northeastern among other crews.

Lightweight rowing
The men of the University of Delaware locked-in golds in both the freshman and varsity lightweight 8+ events after a superb season. After losing only one race all year (to Princeton after having won against Harvard, Dartmouth and many others), the crew returned to the front of the pack today.

In the lightweight men's four, MIT was solidly in the lead approaching the last 500 and cruised it in for the win. It looked straightforward; however, the crew's first race together was the morning heats the same day, as MIT does not race lightweight fours in their regular season. Despite the new lineup, they were confident going into the race, according to coach Jeff Forrester. The four will be back in combination with the rest of their 8+ to race as the 2V8+ at Eastern Sprints next weekend, but in the event of an IRA bid, the 4+ would be back together to race.

On the women's side, Canadian crew Brock took the gold in the lightweight four, followed by Penn State and OCU. Despite missing first place, Penn State athletes beamed with the silver medals around their necks. The continued influence of Penn State graduate and 2012 Olympian Natalie Dell was apparent through the confidence of the women.

"Natalie is a constant inspiration to the girls and guys," said coach Peter Rosberg. "It's a really big deal for a team like ours; the national team now seems like a possibility to the girls."

For the third consecutive year, the Bucknell women cinched the lightweight 8+ win. Their strong, steady race reflected a consistent season for this lightweight powerhouse program. After winning this event for the first time in 2003, the Bucknell women's program grew with a focus on lightweights, but their success only fueled the recruiting power of the school's rowing team. Head coach Steve Kish has been with the team for 17 years. Prior to the 2003 win, he had 6-8 athletes on the team each season—in the past few years there have been upward of 60 Bucknell women's rowers.

Women's Varsity 8+
A strong field in the women's varsity 8+ stormed down the course late in the day. In the last 300 meters, Grand Valley State pushed into a strong sprint capture the gold from UMass and Bucknell, capping a successful day for the Grand Valley State women and men. Grand Valley made it look easy on the day, but while not without recent notable successes, especially their Head of the Charles 2012 win, did not have an easy go of it this spring. Record flooding in Michigan forced the rowers out of their boathouse three weeks ago, damaging their equipment badly and forcing the team to relocate to a nearby lake. Assistant women's coach Alyssa O'Donnell described strong winds that then damaged their fleet which was being stored outdoors. "Our boatman, Matt LeBlanc, the best boatman in Michigan, fixed all the boats up in one day. Our girls never let it affect one stroke—they don't let Mother Nature get to them."

In a twist rarely seen at the varsity women's level, the Grand Valley women were led by their male teammate, coxswain Kyle Barnhart. "He just makes them go," commented O'Donnell. "He's just committed as the whole boat."

Men's Varsity 8+
Reporters from local TV, newspapers and sports magazines crowded the dock in anticipation for the men's varsity eight final, and they were all glad they did as hometown heroes Drexel University raced into first place. The stands full of rowers roared as the Dragon men celebrated on the water; this was Drexel's moment. The whole program was there to cheer for the victory—it was another win in the day of dominance for the Philadelphia based team.

"Each boat feeds off others in the boathouse," said Men's head coach and director of rowing Paul Savell. "It's been a great day of every boat supporting each other. I hate to use the cliché, but we really are one big team pushing each other all year long."

This success did not come overnight. "Everything these guys have worked for has come true. It was an unbelievably fast field and we knew we had to be at our best to win."

At the end of the day, it fell to the Drexel men's pair to clinch the overall points trophy; the pair had been scheduled to race at the beginning of the Saturday finals program, but due to the schedule changes, ended up racing at the end - with the team trophy on the line, a rare situation for the small boats in a big program. In one of the closest races of the day, the crew eked out the win in the final couple hundred meters, and their reaction showed that they knew they had won more than just their own race, but had brought home a couple trophies for Drexel.

OCU Captures Golds and Silvers in 1x
Due to the rescheduling, the day ended not with the big eight events, but with small boat racing. Oklahoma City University captured both the gold and silver medals in both the men's and women's single race. As the medalists arrived on the dock, the gold and silver scullers leapt out to hug one another and celebrate not as individuals, but as teammates.

"The main priority is doing well in the single and medaling at Dad Vails," said men's coach Cam Brown. "We train the athletes in the single and many go on to under-23 trials." Because the US National team rows out of the OCU boathouse, the collegiate athletes often have the opportunity to do pieces against those training in Oklahoma.

For many of the athletes and teams racing this weekend, Dad Vail concludes the season (and for some their college careers), as folks head home for summer break—or summer training as coaches like to call it. For others, this was another step toward the rest of their championship season. 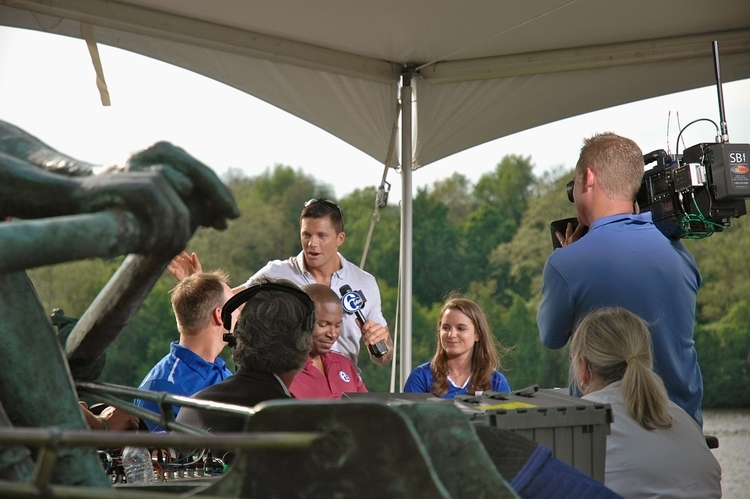