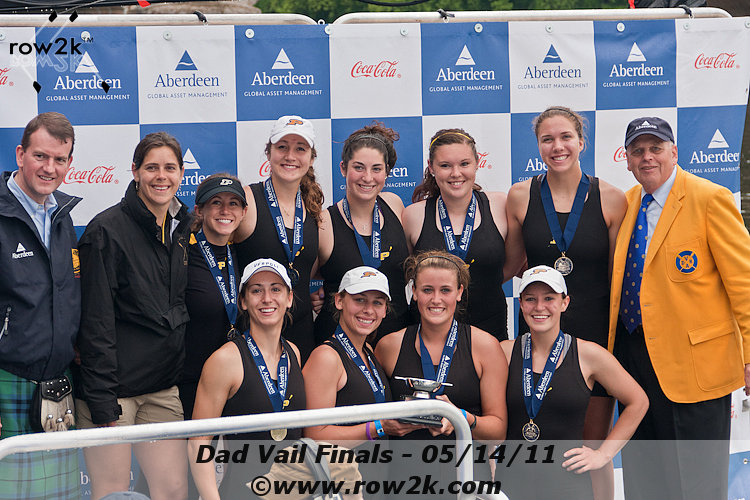 Purdue Boils Up Points Trophy
The setting of the Schuylkill course’s finish line grandstand at the Aberdeen Dad Vail Regatta during a rain storm can be pretty intimate and mighty loud, especially when a crew from Purdue is getting an award.

“Boiler Up!” chants the attentive posse, and did they ever this Saturday, as the Boilermakers took both the Women’s Points trophy and the Overall Points trophy at the annual Dad Vail regatta, version 2011, complete with the Aberdeen prefix and television cameras, elite scullers (more later), exclusive viewing enclosures, and the return of the mysterious Gold Cup.

“I’m doing my part,” says JP Kirkegaard, freshman coach of Purdue men’s program of the team’s goal of winning the overall points trophy. His frosh/novice lightweights and heavyweights both took gold to get head coach David Kucik that much closer.

“When the lightweights won it was unreal,” he comments, “but when the heavyweights won too...,” most could interpret the end of this statement by his expression, he left it at that. “This is the race we train for, this team has an innate desire to ‘never quit’,” he explains.

Kirkegaard is familiar with his crew’s motivation, as he was in a seat at Dad Vails not too long ago. When Purdue won their back-to-back Men’s Varsity Heavyweight Eight awards in 2007 and 2008, he was rowing starboard for the Boilermakers.

The Purdue juggernaut was led by their up-and-comers, as the frosh/novice women’s heavyweights also earned a medal, this time silver to Western Ontario. The women added some points to their tally with a photo-finish victory in the Varsity race over first-seed Old Dominion University by just four tenths of a second.

Sandy Calfo, coach of the women’s squad for Purdue, has also returned to Purdue to contribute as a coach after earning a gold, silver and bronze as an athlete. “We really embrace the team-oriented club concept… we support each other, the men’s and women’s teams,” she explains.

“We had a fairly rocky road leading up to this race,” she admits. “We haven’t consistently performed well this season.” Her new line-up of four sophomore and four senior rowers hadn’t gotten in rhythm yet, but “we were able to go through heats and semis and learn a little” she shares. With Purdue gunning for the points trophy, Purdue Women’s wild-card victory over a shell-shocked Old Dominion, (with Nova Southeastern closing the margin for third), was critical for the club.

“This crew races against heavyweights all season, this was their first lightweight race,” says Adrian Spracklen, coach of the Lakers. “We get them in competitions against crews better than themselves, and it pays dividends,” explains Spracklen.

“We were getting some traction, “says Spracklen, who explains that it was a weather-destroyed course in Michigan that ultimately led to his crew gelling. Mid-season the crew raced some boats in a scuffle after another cancelled race, and the result of second to Michigan heavies, who won here later, gave them some confidence.

Spracklen, who spent the weekend making trips up and down the course in the coach bike peloton because he had his Women’s Division II Heavyweight Eights two events after the men’s lightweights, ended up late to the award stand after finals. The men had given up on his appearance and gave every sign of stepping off the impressive Aberdeen awards dock, when Spracklen came sprinting down to get his 2 minutes of fame… followed by his second two minutes of fame as his women won too. No, make that at least 10 minutes of fame, as Spracklen was interviewed by local ABC television station Channel 6 in the aftermath of his dual victories. Of his appearance on television? “You don’t see that too often.”

Points from the newbies
At this Dad Vail installment, novices were big players; just ask Rollins head coach Shawn Pistor. His fresh/novice four (directly coached by Brandon Thompson) was undefeated this season, including wins a SIRAs and Florida State Championships. They are led by a senior novice who just started rowing in January, Ryan Webb, and won one more championship medal at Dad Vails, knocking other points trophy contenders off the awards podium for this event.

Moving north, Western Ontario took the Women’s Frosh/Novice Eight win over Purdue. “We had a really big turnover in our program last year,” says Dan Bechard, coach of Western Ontario. “So we targeted the Freshman Eight for Dad Vails,” he adds. “We had 14-15 girls express interest, and we picked the top girls.”

Pair
With a small crew, sometimes the victories are larger. Drexel pair Liam O’Neill and Pete Schmidt won the Varsity Men’s Pair decisively, their second in as many years. After getting a gold draped around his neck, stroke O’Neill walked up the stairs to the grandstand where he gave his father his medal, with a big hug. Asked why it was a big victory, Coach Paul Savelle says “He has just been through a lot this year.” (Which seemed an understatement.) The pair is coached directly by Steve Florio, who says “they are the first at the boathouse, they get the most miles in… this was their goal.”

No Cap and Gown
It is worth noting that for many rowers, this weekend was graduation, and Dad Vails meant a choice to not don a cap and gown and walk. Such was the case for University of Massachusetts seniors Carly Payne and Liz Euiler, who won in the Lightweight four, justifying their ditch of festivities in Amherst. A team discussion weeks ago led to the decision to put a top four rather than eight on the course, as a few decided they wanted to attend graduation, says Coach Laura Simon.

In the heavyweight iteration of the same race, local Villanova crew took the top honors. “They are a good group of dedicated young ladies…,” says Coach Jack St. Clair and adds that they had very limited rowing experience prior to showing up to row with the Wildcats. With the campus just about 30 minutes away from the course if you blow through the guard on Kelly Drive, Villanova athlete Allison Talleri managed to attend her graduation between heats and finals. Congrats, turn that tassel.

“I never expected us to be ahead at the bridge, FIT and Delaware had been flying off the start,” says Hartsuff.

Michigan’s coach says that their smallish training space on Argo Pond means they take several laps during practice, often going off a stake to start a piece. It must calm the team to know what to do at the start. Although they were not rabbits, they did seem to have some confidence when they were already in the lead past the Canoe Club.

Michigan is just recovering from their win at the ECACs in Worchester on Sunday, and Hartsuff notes “this particular crew gained a ton of maturity,” (since their loss to Williams and Trinity at last year’s ECAC) .

Associate Coach Charley Sullivan points out that the varsity team is only graduating two seniors, and is encouraged by the deep team coming up in Grand Rapids.

Hartsuff’s Men won the Team Points trophy so there was a brief time when “Go Blue” drowned out “Boiler Up.”

The Cup of Gold
In the mix of the largest collegiate regatta, is it possible for a national hero to get lost? The answer, it seems, is yes.

Iztok Cop of Slovenia is arguably one of the most successful rowing athletes in the World and a legend and star in his own country, and here he was on the Schuylkill water, with folks on the banks waiting for the next collegiate race not entirely sure how celebrated this Philadelphia Challenge Cup winner really was. He is returning home to train for his SIXTH, yes 6th, Olympics. At just shy of 39 years old, he is still a leader on his team, and after a year of reduced campaigning, is ready to train into the 2012 London Olympics. He has been in World Championships since 1988, except last year when he gave himself a well-deserved break. The Philly grandstands seemed to have no idea of the talent in their midst, despite the considerable hype leading up to the return of the Philadelphia Challenge Cup.

“That turn makes it a bit special,” says Kop of the dogleg turn in the Schuylkill course. “And we could have done without that little sprinkle before the race,” he quipped. (The overcast skies turned to rain in the late afternoon) “This is not World Championships, so the course didn’t matter… I just wish this were the end of the season like when we were in Boston (Kop stroked the “Great Eight” in Boston in 2009 with 7 other elite scullers from the around the world),” he adds, so that he could really have fun and enjoy his visit to the United States.

For this first victor of the re-established Gold Cup, the few feet of open-water win over Ken Jurkowski of the United States and reigning World Champion Ondrej Synek of the Czech Republic, there is a bit of a statement… “I still got it.”

Mirka Knapkova of the Czech Republic surprised herself (and others) by taking the race from both the current World Champion Frida Swensson from Sweden and the powerful Ekaterina Karsten, who has owned the single sculling events at the World Championships and Olympics since the mid-1990’s, medaling at the Olympics four times, at four games. “It is early in the season and I didn’t think I was ready, maybe I am,” she says. She is actually fighting for her spot as the single sculler for Worlds, as another Czech woman bested her recently… stay tuned on her placement in the team. Knapkova says there is a race similar to the Dad Vail course in her hometown, she wasn’t bothered by the irregular 2k. “I have only beaten Karsten once,” he stated, then said, “well, twice now.”

Both of these athletes are just heading into their competitive season with World Cups and World Championships on the horizon from June to August. This race, as an unofficial preparation for this pre-Olympic year, had some unexpected and pleasant results for the European contingent at Dad Vails. (Even writing that seems a little strange.) 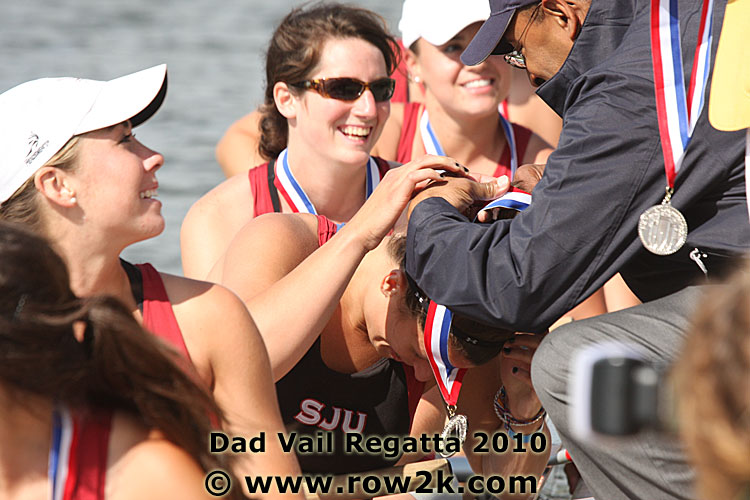 Bringin’ it, To Philly: the 73rd Aberdeen Dad Vail Regatta