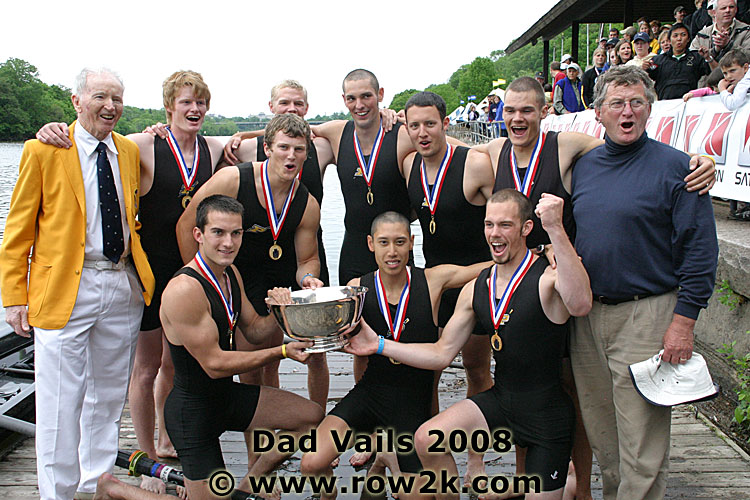 "Remember how good the bus ride home was last year."

That was the understated if loaded comment from the ranks as the Purdue men's varsity eight shoved off the dock after receiving their gold medals and trophy in the men's eight, and piling the overall points trophy on the heap at the close of the 2008 Dad Vail on Saturday afternoon.

And there has been a good string of decent bus rides back to West Lafayette, IN, over much of the past decade. Although the Purdue men's eight won the event for the first time only last year, the program has won the overall points trophy seven of the last nine years, and won the men's point trophy six of the last nine years. On the road to the points trophy this year, the winning effort in the men's eight was helped in particular by a bronze in the women's eight, and a gold in the women's JV 8.

In the men's eight, an iffy start in the Saturday morning semi gave the crew some pause, as well as somewhere to go, for the afternoon final.

"In the semi, we got dropped in the first 20 or 30 strokes, so this afternoon we knew we had to get up and go," said a jubilant coach Dave Kucik on the medals dock with his squad. "Colgate really showed some speed this morning, but we knew we did not have an exceptional start this morning, but we felt we had seen all the speed that was out there, and thought we were in the hunt - but of course you have to go out and race. This afternoon they were able to put it together in the first part of the race." He paused and looked around as water washed over the finish line dock from all the celebrating student athletes, including the stern four and coxswain who rowed in last year's winning men's eight crew. "This is awesome."

In the women's eight, it was a West Coast affair in this quintessentially east coast rowing town, with University of California at Davis taking its first Dad Vail gold ever, and California State University at Sacramento (more commonly referred to as Sacramento State) taking gold and silver ahead of the Purdue crew. The Davis crew turned around from what head coach Carissa Adams said was a disappointing race at the WIRA regatta last weekend.

"We had a great season, and I thought we could win it here, but we had been a little disappointed last week," she said of her experienced crew, which includes seven seniors and one sophomore from bow to stroke. "We had a much better regatta this weekend. I was impressed that Sacramento was that close; I guess the west coast is representing here!"

In the DII/DIII women's eight, spectators were briefly spooked when the six-seat of the winning Dowling boat collapsed over the gunwales and into the water shortly after crossing the finish line. She was able to rally enough to hug her teammates and stand for the medal ceremony, then surrendered her seat home to a team member (or coach?) for the row home; those khakis might may have been sacrificed to some track stains for the cause.

The light men's eight was won rowing away by the Fordham crew, which has been racing in heavyweight events all year. "It is a strong boat, and they have been racing heavyweight all year," said coach Ted Bonanno. "They have won every race except the Murphy Cup against Temple, so I thought they could win it here." The crew hopes to compete at the IRA in June. "I think they have a shot at doing fairly well, so we will be looking forward to it."

The light women's eight was won by Central Florida, who will undoubtedly show up on the Cooper River in a few weeks as well to take a shot in the final collegiate championship of the year.