On a weekend where they had to share the water and the spotlight with not just the best collegiate and high school crew teams in the country, but also with future and past Olympians, it might be easy to miss the youngest and newest members of the rowing community competing at the San Diego Crew Classic.

But in an event that hosts early season sprint racing for nearly every age and experience level, there was room to spare in the awards area Sunday morning and the high school novice kids had their moment to shine on Mission Bay.

Among some of the first crews to start the day-long parade of finals, and before the collegiate and high school varsity trophy races drew the crowds away from the medal ceremonies and down to the edge of the water, the newest champions of the Crew Classic took their turn at the podium.

"It's very exciting," said Grace DeVita who rowed seven-seat in Marin Rowing Association's winning novice women's high school eight. "It's a pretty cool experience, and one I'll never get to do again as a novice. It's such a cool thing to put it in your book of experiences, and then look back on it when you're older.

"I don't think anyone looks at the novices, but I do want people to look at us," she said. "We want to take advantage of this. You have all these college crews here, and watching them makes me want to keep on doing this."

Judging by the looks of their faces when the medals were placed over their heads, it was easy to tell that they were living a moment that was going to stand out for them for the rest of their careers.

The 46th San Diego Crew Classic appeared to have had the same impact on nearly every crew that won, or even just rowed here yesterday. There are not a lot regattas where high school athletes get to mix with top college teams, Olympians and masters on the same day for spring sprint medals and memories, and the Crew Classic is one of them.

By the end of the day Sunday, 36 trophies were handed out to go with the 378 medals that were awarded during the two-day regatta. Every event, won or raced, was notable to the athletes in them, while some stood out as events to pay attention to.

For the high school varsity crews, the San Diego Crew Classic was easily one of the most competitive events run between the start of the spring sprints and the season ending championships. In the men's high school varsity eight, 18 crews were contesting for the win, and Capital Crew from Gold River, California took the top spot. 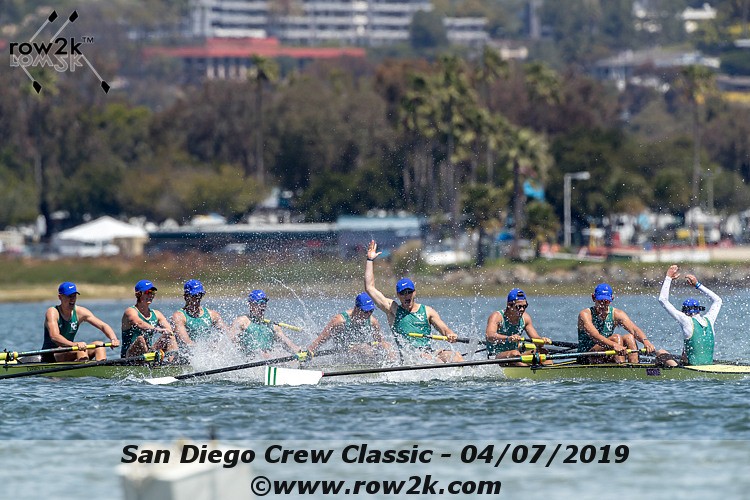 As for the Marin novice girls, winning here for junior Louis Gaillia was not something he would ever forget and he said the day was made more special by the fact that he was a novice rower just last year.

"This is the definitely the biggest race I have ever even come close to winning," he said. "So, it's just a great feeling. We've been really even with the other top crews since the beginning of this season. We went to the line confident, but we also went in not knowing what was going to happen, so it feels really good to come out with the win." 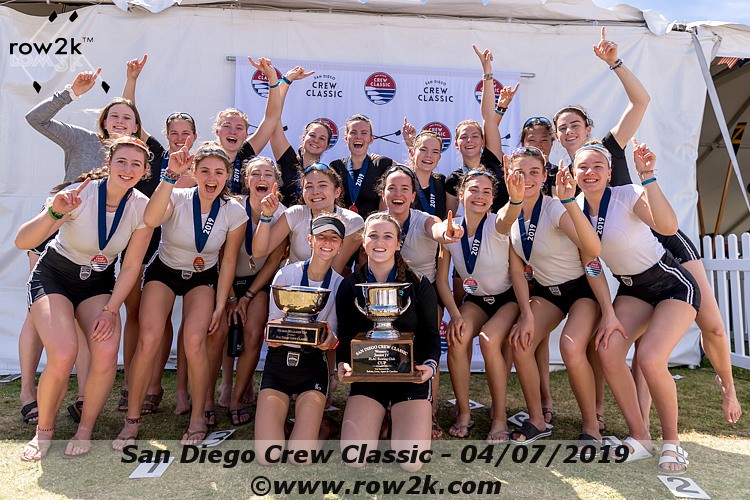 Among the collegiate ranks, the races that drew the most attention were the women's varsity Jessop-Whittier Cup Invitational, which was billed before the regatta even began as a repeat of the 2018 NCAA Championships. 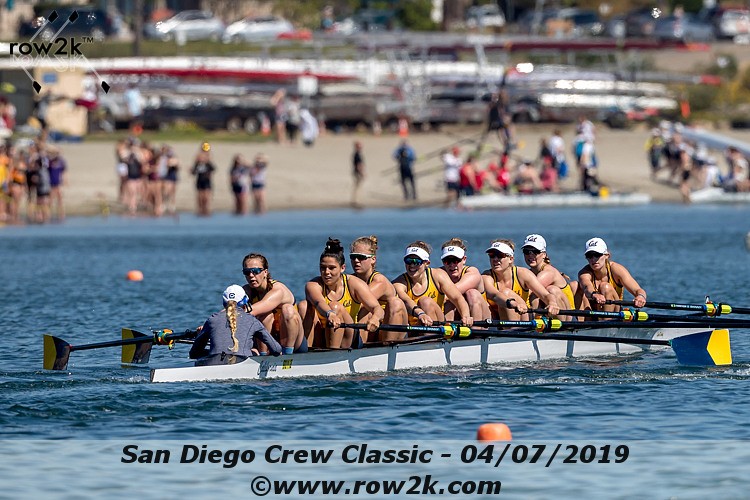 University of California women racing to another Crew Classic victory

"I knew it was going to be really good racing. But you never know who is going to win, it's really good, high level racing. Texas is super-fast, Washington is fast, and Stanford is fast. It helps when we have some pretty good rowers in the middle of our boat, kind of driving through the wind and settling everybody down, and I thought we did a nice job.

"It will be good to get back to work this week, get some injured kids kind of back in the boats and healthy, and get ready for the real NCAAs in a month and a half."

As an added attraction to the slate of crews competing, the day featured an exhibition of past and present US Olympic team athletes rowing in mixed eights in a thousand-meter sprint.

The boats were made up of athletes who were members of US national team crews from the 1976 Olympics, through the teams that have won at the last three Olympics and women in the mix for selection to the 2020 team.

Among the crews was Anita DeFrantz, who won a bronze medal in the Montreal Olympic Games in the women's eight, and followed her competitive career as the first woman vice president of the IOC executive committee. 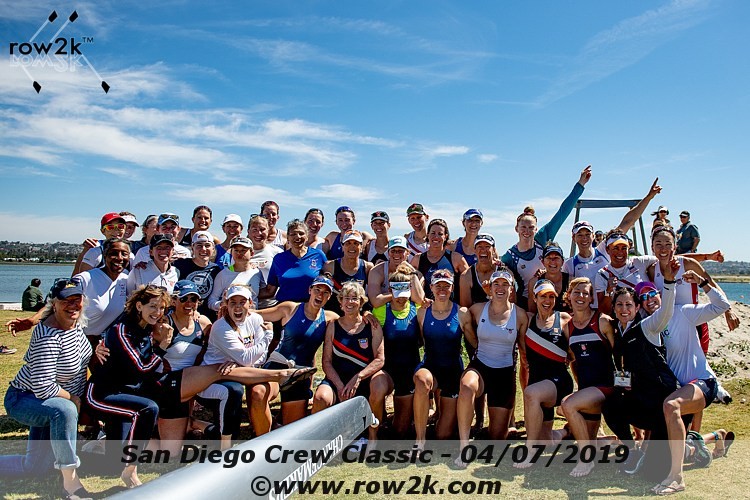 Past and present US national team athletes

"It was wonderful," DeFrantz said of being invited to row. "As soon as we were warming up, and as soon as we got the blades in at the same time, there was just such power. I will confess I was a little bit unfocused, just because I was there with these wonderful athletes and out on the water again," she said.

Bridging the years between DeFrantz's era and the crews that have won the last three-Olympic gold medals was coxswain Mary Whipple, who won gold in the women's eight in 2008 and 2012.

"When I first got in the boat, I had this huge smile because it was like we had not skipped a beat," she said. "It was so much fun. I wanted to warm up longer, and I wanted the race to be longer. It was a really fun experience, and I hope it's an annual thing because I want to do it again."

In addition to the high school and collegiate races, the Crew Classic has a significant block of masters crews. They come to race, but they also come to enjoy the shared experience of being part of the rowing community.

One very large contingent that showed up at the trophy presentations was the women of the ZLAC Rowing Club of San Diego. After winning the women's Masters B Fred Rickon Memorial Cup, so many of the club members showed up they could not all fit into the awards area.

ZLAC is based in San Diego, rows on Mission Bay, and volunteers in droves to help run the Crew Classic; so, having won the women's masters B eight was cause for the massive celebration.

"It's a really wonderful club here on Mission Bay," said Whitney Kirk. "This is our home water, so we always have the best support here. We have a lot of people who volunteer for the regatta, that set the lane lines, that officiate, that help in any way we can, so we get a lot of support when we put a crew out on the water that can represent the club well.

"This is a wonderful event," she said. 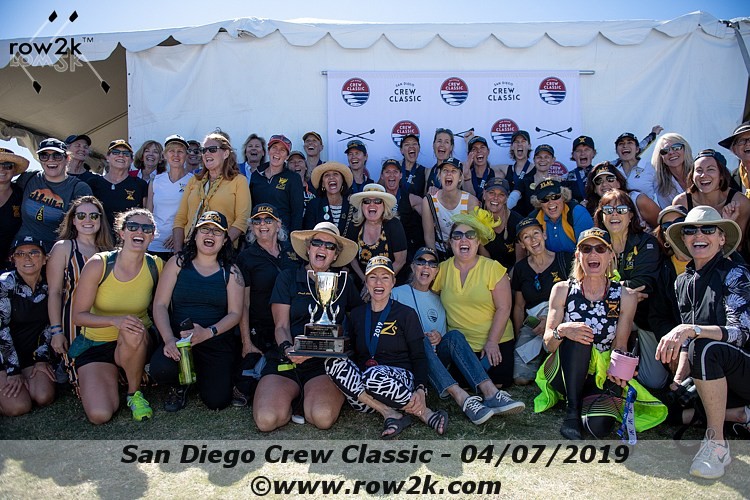 Time to Race in the San Diego Sun