Depending on who you ask, racing well and winning at the San Diego Crew Classic is one of three things; a really big deal, just a weekend to celebrate rowing, or more of an event to judge a team's early season development than a victory that makes a huge statement.

It is, after all, the first big weekend of sprint racing for collegiate and high school teams - crews that are two months or more away from their championships.

And for alumni teams and masters, who to come to escape the cold of winter, or just to get in a good race in a fun environment, the Crew Classic is really about hanging out with friends and racing for fun.

So for the 4,000 athletes who raced Saturday and Sunday on Mission Bay in the 45th Crew Classic, win or lose, the scale of the win, no matter how big, was measured against the races to come. Winning in San Diego in March is a big deal - more so for the high school and junior teams - but the season is only beginning.

Just ask the coaches at the University of California, whose men's and women's crews won everything they raced. Cause for excitement? Sure. Cause for jubilation? Well, not really.

"I'm happy," said Cal men's head coach Mike Teti, not long after his men's varsity won the Copley Cup Invitational, the top men's varsity event. "But I'm more relieved they won than really happy, because you know these teams are going to get better.

"I mean, we had a good lane, and I think Yale doesn't have their full complement of players right now. And I was super impressed by Northeastern. But these teams are going to get faster. Yale is going to be solid. Harvard is going to be good; so is Princeton and Brown. Dartmouth is coming on. So you can't get too excited over one race. I mean, as a coach you're happy, you're relieved that they won. But it's a mark.

"And we're a California team, we've had a lot of water time, so we should do well. So we checked that box, and now it's on to the next big one. We'll have Wisco in a few weeks, and then Washington. So we're right back into it." 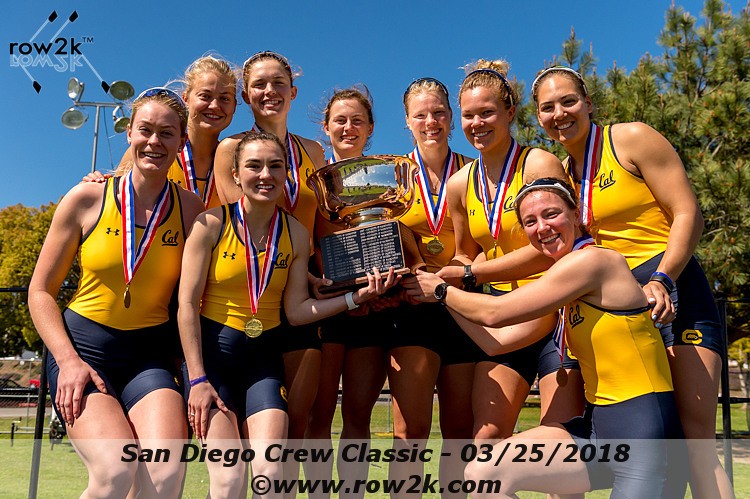 California women on the awards stage

The sentiment was the same on the women's side. The athletes had fun winning and mugging with their trophies and medals, but the coaches kept the elation down to a minimum level of the great win; happy for the kids and parents, and now on to the next one.

"It was a good start to the season," said women's head coach Al Acosta, after his varsity women claimed the Jessop-Whitter Cup Invitational, the top prize for collegiate D1 women. "We couldn't really ask for anything more.

"I think it's great for the kids because it's fun, it's a great environment, and it's a lot of fun to have our alums down here to see us race. It's just a good California day. It's the first big one and it's just a good check mark to see kind of where we are. A good first step."

And so it went at the Crew Classic on Sunday. Even for the smaller teams that haven't won a Crew Classic title in few years, like San Diego State University, which won the Women's Collegiate Varsity Cal Cup, or the University of California San Diego, winners of the Women's Varsity DII/DIII Club and Novice Championships, their celebrations were genuine, if measured. 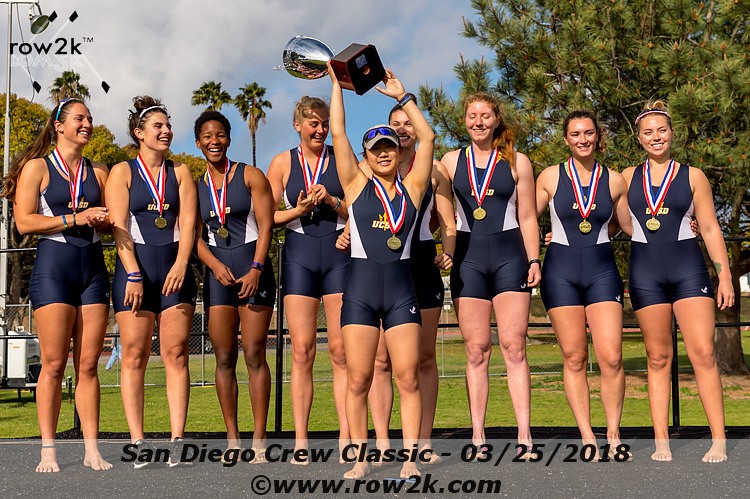 UCSD with their trophy

"This was the first time we've won in a long time, so this is a bit deal for us," said UCSD senior Catherine Mosher. "We had a really solid race yesterday, but we knew we would have to bring it today, and I think we did.

"We need to realize that there's still other teams out there that we need to catch and that are trying to catch us so, while it's a good boost for us, we need to still be on our speed." 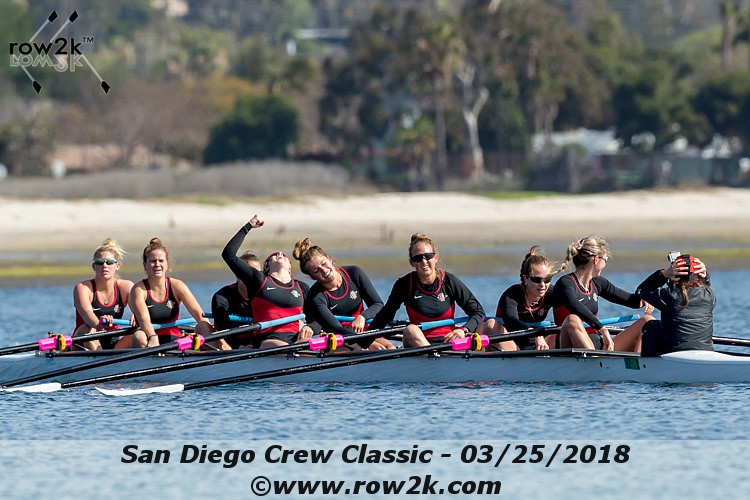 "Winning the Cal Cup is a big deal. It reinforces not only to the team but to the people that are watching the team, the parents, alumni, recruits, that we are doing the right things. It's exciting to know that we will be able to be in the Jessop-Whitter Cup Invitational next year and it helps us for the rest of the season."

If there were any teams that did take their Crew Classic victories more seriously, it was the high school squads. To the, winning on Mission Bay is a very big deal, said Marin head coach Sandy Armstrong, whose varsity women edged defending champion Saugatuck Rowing Club to take the Gilman-Milliken Cup, which was followed by the Marin lightweight varsity girls winning the Varsity Lightweight Championship. 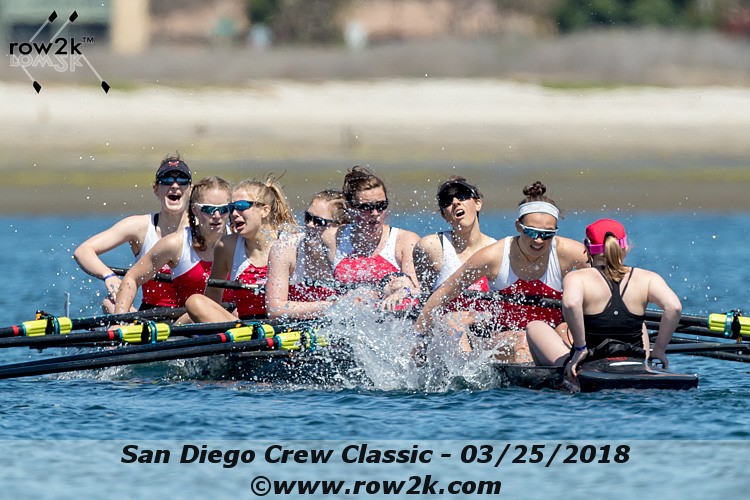 "It's such a hard race to win," Armstrong said. "One, it's amazing competition. Two, just getting through the heats to make sure that you are clean in a good lane for the final is difficult. And then, there are so many variables, and you just have to race hard and nobody just wins San Diego. So I'm thrilled, I'm thrilled with this younger group, and we're thrilled to have raced against some amazing competitors."

"It's fun winning here," said Newport coxswain Dylan White. "It's exciting and it's a big morale boost going into regionals. I think that racing here is awesome, with the JumboTron. It's a lot of energy and a lot of people ready to win. And to win it is a big confidence booster. 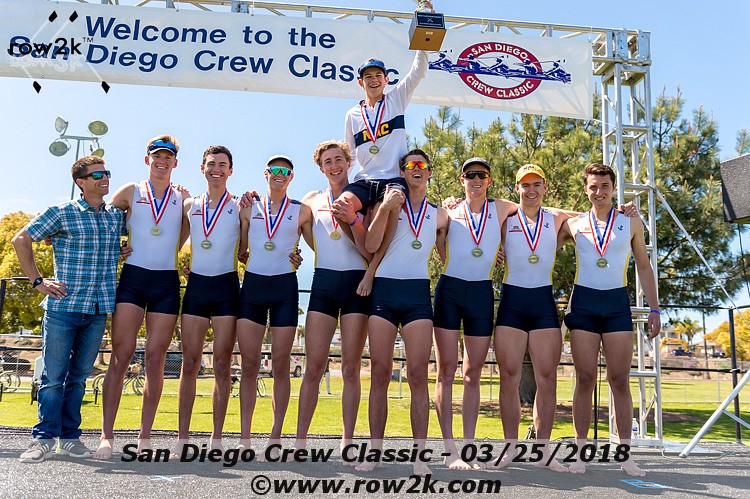 Speaking of the JumboTron, it was kicking nicely on Sunday - but it took a little time for the crowd to notice... 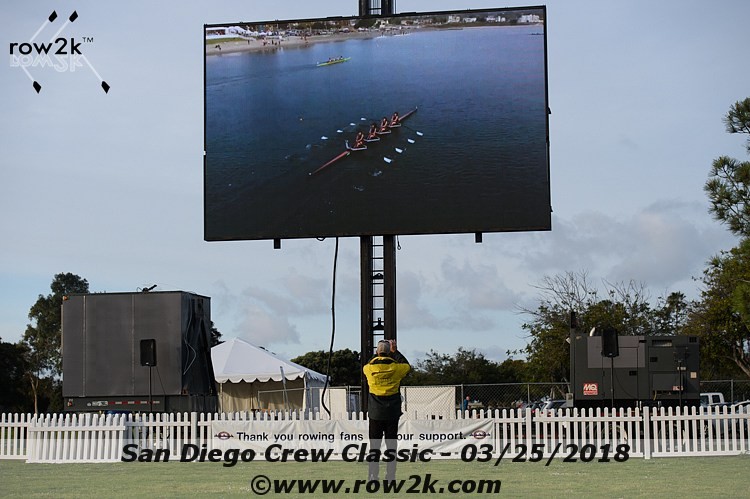 Taking a pair of jet skis out on Mission Bay during the Crew Classic is never a good idea. It's an even worse idea to do it really late in the day in front of the beer garden when a masters race is on the course.

A group of life guards found that out yesterday when they went out on the water for what looked like some training. There were a few shouts from the crowd of beer drinking fans from the shore that escalated into something of a chorus of "Get off the course," that included increasingly, well, colorful shouts until one of the guards caught on and got both jet skis to shore...

The Crew Classic is all about tradition, and John Barbey is holding up his end; the 101-year-old presenter of the Laurel Korholz Perpetual Trophy has been presenting the trophy for the Women's Collegiate Novice since its inception. This year's winner was the University of Texas Austin. 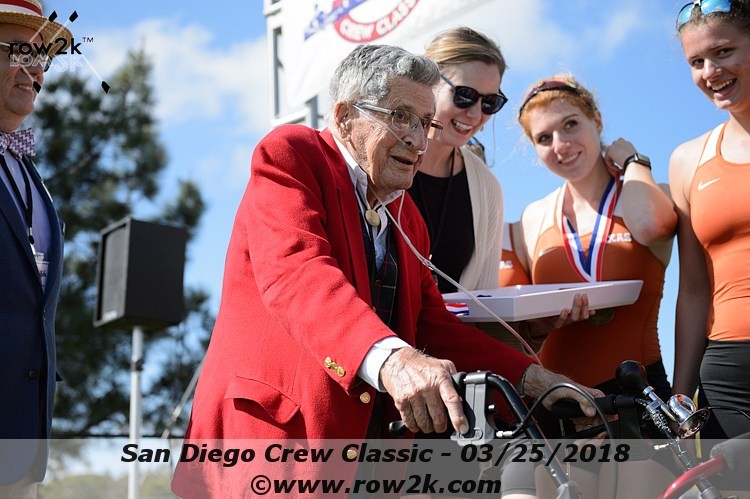 Saturday, row2k took a few shots of regatta dogs playing on the beach. Sunday was toddler day; and in many cases toddler and dog day. 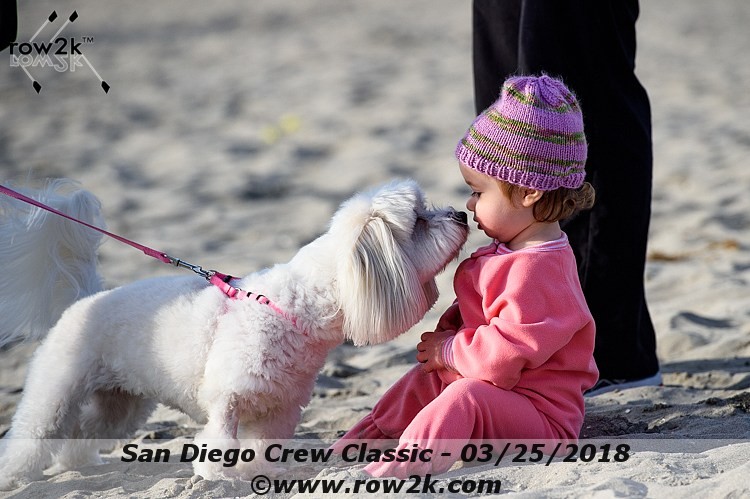