Between the nine women in the "Old Glory" masters eight that was sitting on the start line Saturday afternoon at the San Diego Crew Classic, there were enough international medals to make any of the other crews racing in the event wonder if they had even a smidgen of a chance of winning.

None looked out of shape.

Asked how she would feel if she were in one of the other boats on the line, and glanced across at a crew that included some of the most decorated women to have rowed for the United States at the Olympics and World Championships - like the one she was sitting in - 2012 Olympian Sarah Trowbridge put it this way:

"I would either be slightly annoyed that they're in my race, or I would think it was really cool. I'm not sure."

The reality of the situation - particularly judging by amount of fun the women were having on the start line - was that the idea of racing the Women's Master Club Eight at the 45th San Diego Crew Classic was really more about being back together with former teammates and celebrating the sport they have been a part of for most of their adult lives than it was about winning another medal. 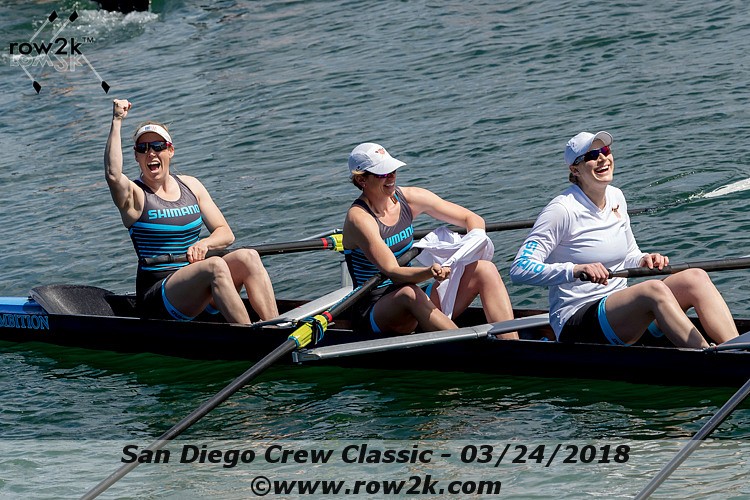 Not they any would concede a single stroke when the racing started.

Competition, fun, and the celebration of a new season of rowing. That is essentially what the San Diego Crew Classic has been about since it began back in 1973, and it was all on display again Saturday.

There were a few new twists to the regatta, one included the introduction of sculling with the addition of a high school varsity men's and women's quad event, and dual racing for the collegiate men's crews entered in the Copley Cup Invitational. 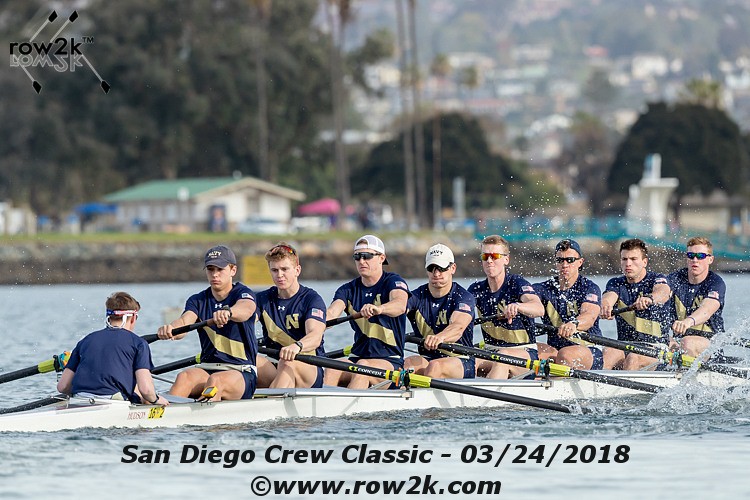 But for the most part, the 45th edition of the Crew Classic began was exactly the way it was intended to be, one of the largest events of the early spring sprint season and a way for crews to enjoy the sport and to test early season speed.

Northeastern men's coach John Pojednic's crew raced two times Saturday in the Copley Cup duals and felt he had already gained enough information about where he crew stood in March, even before racing in the Sunday final. "I think this is great," Pojednic said. "We got a whole data set from just this morning on six teams."

In all, some 4,000 athletes went to the line Saturday. For most the racing was about sorting out which crews would race for medals and trophies Sunday. 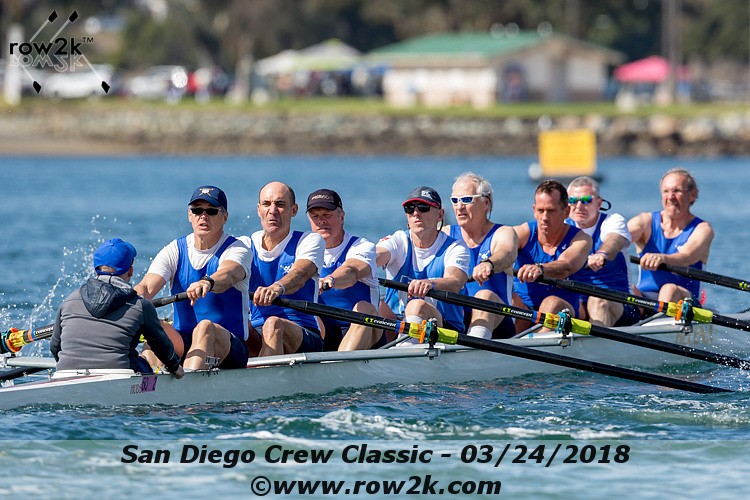 There were a few finals raced in the Masters events yesterday, including in the men's over 60 eight, which was won by Cambridge Boat Club. That crew also featured notable Olympians and was coxed by 2004 Athens Gold medalist Peter Cipollone.

Like the women's "Old Glory" eight they were in San Diego to have fun - but they were also serious about wanting to win.

"We take this seriously," said Steven Faber. "All of the boats have people in them that technically know how to row, and row well. We're smiling and having fun because we won. It's nice to come here where the weather is warm. 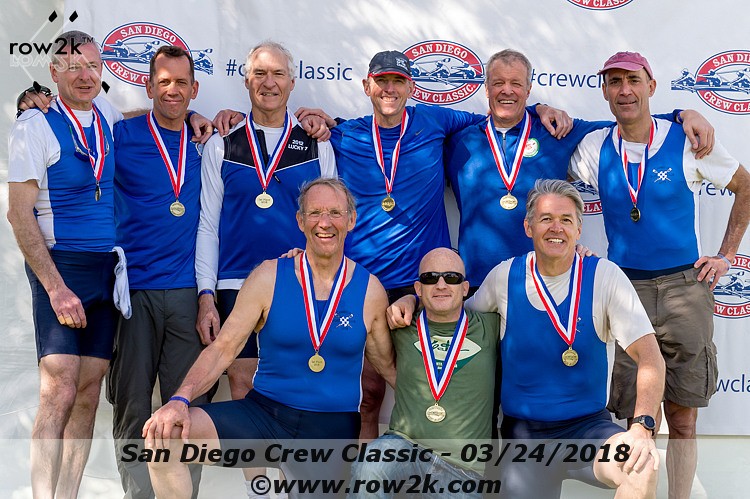 It wasn't all fun and games on the race course yesterday. In one heat of the men's open eight, three seat in the University of Calgary Rowing Club caught an ejector crab and was taken off the course bandaged and suffering from a possible concussion.

The race was stopped just a few hundred meters from the start while emergency crews pulled the rower from the water and got the oar out of the broken rigger. 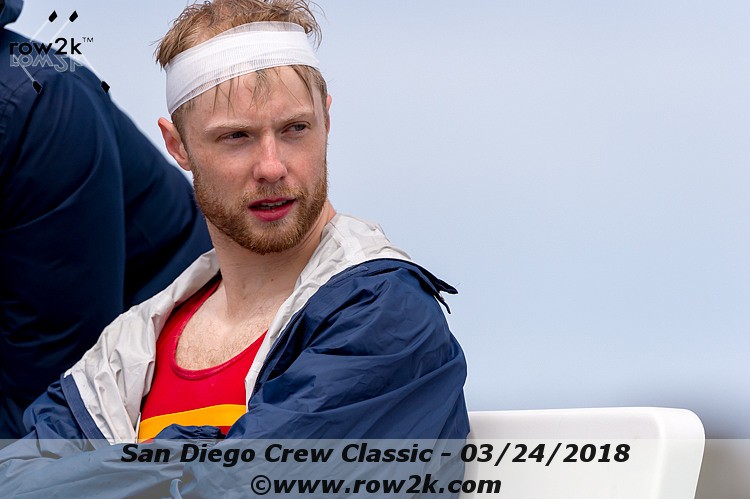 When the crews were called back to the start line to re-run the race, the remaining athletes from the Calgary crew opted to race with just seven rowers.

Their determination drew cheers from the other crews...

The Crew Classic usually has a JumboTron fired up and broadcasting the racing live from the course that attracts crowds of spectators. The lawn in front of the big screen was empty Saturday due to a glitch in technology. Something about the wireless transmission was not working. 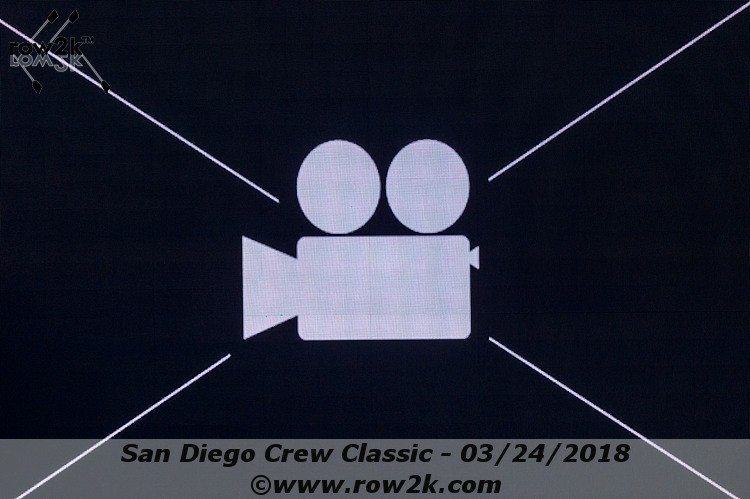 By late in the afternoon, 600-feet of cable was run from the overhead cameras directly into the big TV set and the last few races of the day were broadcast. Race organizers are hopeful the problem is resolved for Sunday...

Fond Crew Classic memories always draw former rowers back to relive past glory. Some come annually. Others get busy and don’t make it back for years. But, oh when they do...

"This is my first year back in many years," said Greg Somers, who won the Men's Varsity Cal Cup in 2006 with Orange Coast College. Somers wandered over to the tent where the regatta medals and trophies were on display and asked if he could hold the Cal Cup again...

"We drank many a beer out of this cup," Somers said. "That was one of the best days of my life. I had a great time winning this Cup. I came back this year to embrace the magic that is this incredible competition and see a lot of good friends."

As in every big regatta, dogs are welcome and always seem to have at least as much fun as the humans... 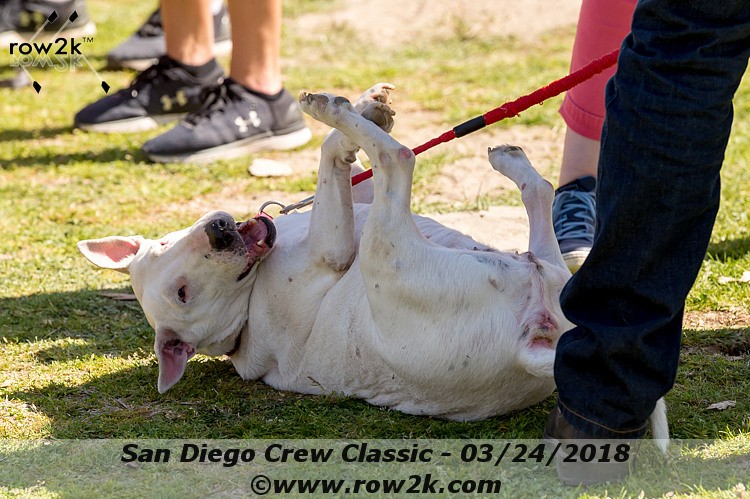