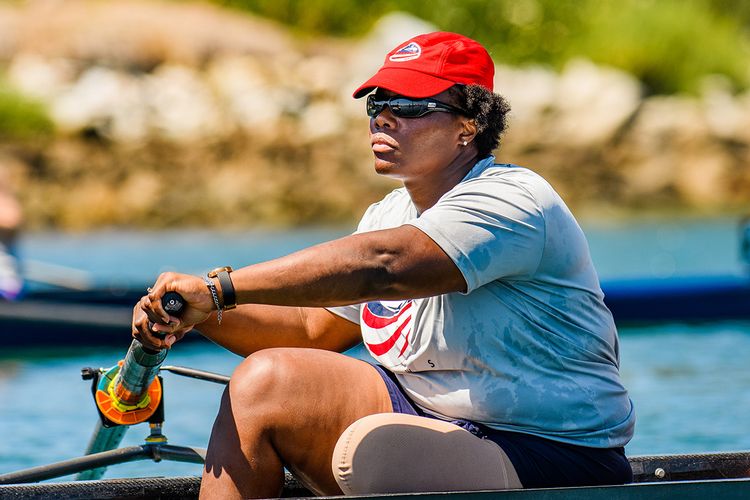 Another year, another spring season kicked off with perfect temps, lots of sunshine, and sunburns galore; the San Diego Crew Classic (SDCC) never disappoints when it comes to lovely summer-like days. (You can tell who the natives around here are, they're wearing pants and sweatshirts.)

This year, however, the locals had to have their fingers crossed for this good weather, and it seemed to have worked. After a number of days of high winds in the San Diego area, the regatta weekend kicked off with glassy, still water that turned into a breeze by the middle of the day, but nothing compared to what was just a few days before – at least that's what they're telling us.

Crowds lined the shores early to cheer on the crews racing in heats that began at 7:20. Parents and friends that decided to trek out to San Diego (or just come from down the street – lots of local crews are racing), were treated to a perfect day of spectating. Rowing isn't known for its high attendance, but when you can make a (literal) beach day out of it, it's not so bad. Lots of folks had beach umbrellas and picnic lunches.

As the first big regatta of the spring season, and for many crews their first 2k race of the year, SDCC is a good time to shake off the cobwebs and learn some lessons for the season. The first loss is bitter, but easier to get it out of the way early than to deal with a tenth of a second loss at the end of spring championships.

For other crews, this is a time for some vengeance. The Yale crew here to defend their 2016 Copley Cup win fell to Cal at IRAs at the end of last spring. Now they are back and had some crazy heat times – in two separate heats (with very similar if not identical conditions) – Yale went 5:42.088 to Cal's 5:42.753. Check back with us tomorrow to see how that throw-down turns out. 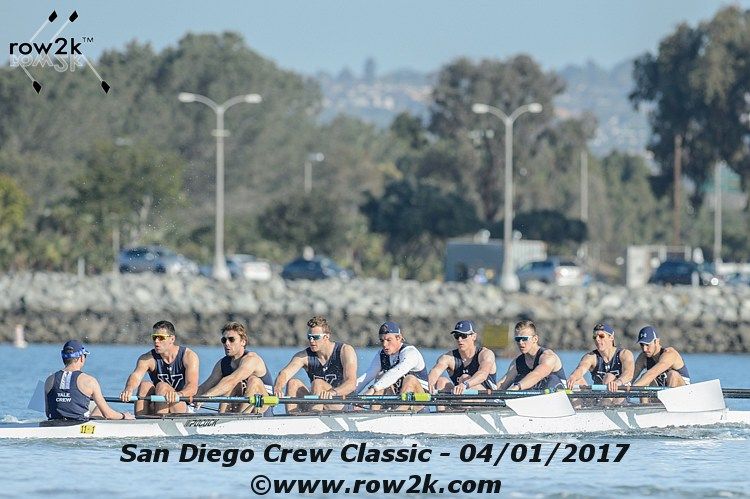 Today's racing was full of heats and preliminary race-for-lanes as well as a bunch of petite and C-level finals. The bulk of the wins will be awarded tomorrow, but a handful of crews went home with medals today.

Freedom Rows
For the third year in a row, the Freedom Rows program – a rowing program for disabled veterans and members of the armed services sponsored by USRowing – made a showing at the SDCC. The program had two crews lined up for the 2k race, and a whole beach of folks cheering for the two crews of athletes who have served our country.

One of those rowers is Russell Gernaat, who served in both the Army and Navy, and only started rowing a year ago - he kicked off his racing career at the 2016 SDCC – but is already has big plans for his rowing career.

Gernaat took up rowing in February 2016 after losing his wife to cancer in a few months earlier.

"I always wanted to try rowing when I was younger but I couldn't really quantify the expenses of it when I had a family," said Gernaat. "After my wife passed away I decided to go ahead and start rowing. I called the club – BIAC – Bair Island Aquatic Center in Redwood City, CA and found out about the Freedom Rows program. I got classified for para-rowing and started rowing."

He says the Veterans who row together for the Freedom Rows program connect well because of their shared background. 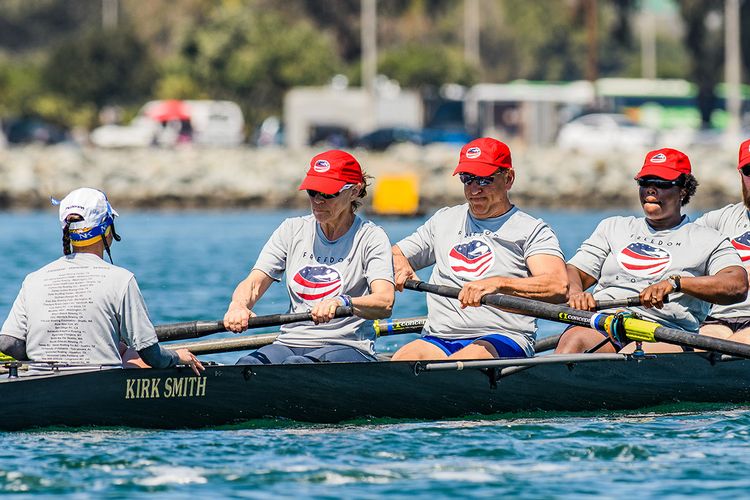 "There is a different mentality between prior service vets and people who haven't served," he said. "It's definitely a different community, and it doesn't take long for us to bond together and build comradery quickly because we have that service background in common.

Gernaat now rows at BIAC with his eye on the rings - he is training for the LTA Mix2x for the 2017 World Championships and just won his race at C.R.A.S.H.-B. Sprints in February. We'll be keeping an eye out for him as works toward his goal of Sarasota 2017.

Masters F (60+)
The Masters F (60+) races are proof that old does not mean slow. Both the men's and women's crews who took home hardware today may have fit the age category, but nothing about their rowing was at all stale. The field was stacked with rolodex crews that get together for racing, but otherwise train all over the country.

The men went off the line first with Kent Mitchell and Cambridge Boat Club fighting it out down the race course. Cambridge had a solid start off the line and had an early lead until the Kent Mitchell crew overtook them and finished first to defend their 2016 title. The field was chock full of Olympians, and both the CBC and Kent Mitchell crews were driven by gold medalist Olympians. Pete Cipollone, who won the 2004 Olympics in Athens with the US Men's 8+, was at the stern for CBC, and Adrian Ellison, who won the 1984 LA games in the GB 4+, raced one another for the first time.

Ellison, who famously coxed Sir Steven Redgrave to his first Olympic gold medal, was visiting the California to drive Kent Mitchell to a win for the second year in a row. (The Kent Mitchell Crew included Ed Ives, an American oarsman who stroked the silver US M4+ that Ellison and Redgrave beat at the LA Games.) This rolodex crew is a bit different than what he is used to back home at Molesey Boat Club in London. 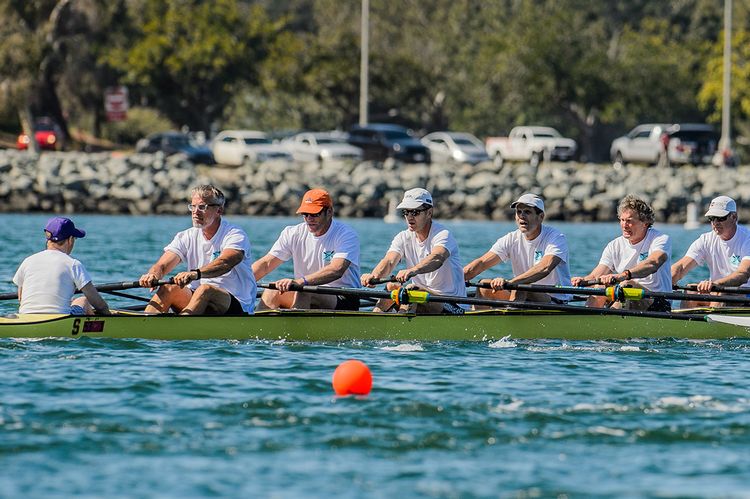 "They really only get together to race which is quite a shock for me," he said."I come from Mosley in London where I am usually with a group of ex-internationals and Olympians; they train together every single weekend throughout the year and sometimes during the week as well, so it was bit of a culture shock where they literally just get on the water to race. "

The crew will disperse after this weekend and get together once again in a month in Auckland, New Zealand, for the World Masters Games.

On the women's side, another 2016 title was defended by perennial champions Long Beach Rowing Association.

Anna Liberovsky who coxed the crew today also drove them to their victory in 2015 – a year that stands out to all the women in the boat as the last year their beloved teammate Joan Van Blom raced before she passed away from an aggressive form of brain cancer. Winning was especially important for them to honor their teammate, an oarswoman who loved to compete.

"We knew this was the last piece of the day for the ladies, some of them for the weekend so we just had to put it all out there," said Liberovsky. "The crews in lanes 4 and 5 had enormous handicaps, we had to make up almost 18 seconds so we knew we just had to go and no matter what we were going to sprint it out. At the thousand meter mark we took ten strokes for Joan and all of a sudden the boat just picked up.

"The women just went out and did exactly what I asked them to; we went out hard. We were not leaving it to the handicaps," she added.

The Long Beach crew crushed the field, not only beating the handicap, but winning by 15 seconds adjusted for the handicaps.

Alumni Eights
The final medals race for the day was the Alumni Eights. Alumni races are especially fun to watch because, well… not everyone is in racing shape. For some, it's their first time back on the water in years, and for others, it's just a fun way to break up training.

The FatCat crew beat one of their own (FatCat A), as well as a quick University of Washington crew to claim the title.

"We decided to do this six weeks ago," Ochal said."Some of the guys recently moved to the west coast and I live in Los Angeles, so we were able to gather enough interest and thought it would be cool to have a nice weekend in San Diego.

"It was a fun race. We knew UW and the other Fat Cat boats were going to be really good, so our strategy was to just stick together and trust our fitness. We did that and it was a lot of fun."

The Cal women, racing as "Team Jill" in memory of Cal coxswain Jill Costello who lost her life to cancer, used the memory of their teammate to fuel their crew.

"It was so much fun, we had great energy," Kohler said. "Throughout the whole day, we were just excited to get out there. It's exciting to get back together with my Bear team and race as Team Jill."

With Kohler and three women from last year's NCAA champion crew, the Cal crew was able to get out to an early lead and hold off the competition to win for the fourth year in a row.

"Our plan was to just get ahead as quickly as possible. At the thousand we took a move for Jill and we could definitely feel the surge and energy at that point," added Kohler. "I think that's the greatest thing for us – to race as Team Jill and commemorate her when we get in the boat." 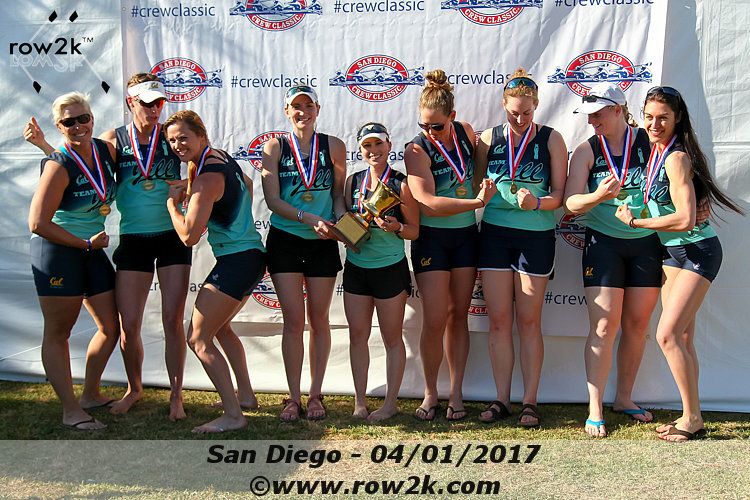 Those strong ties to teammates run throughout the regatta – from women honoring the legacies of Joan and Jill to the Freedoms Rows Veterans sharing a new experience together.

Tomorrow, collegiate, masters, and junior crews will line up for Grand Finals early and often, and we'll be back with many more results, stories, and photos from the 2017 San Diego Crew Classic. 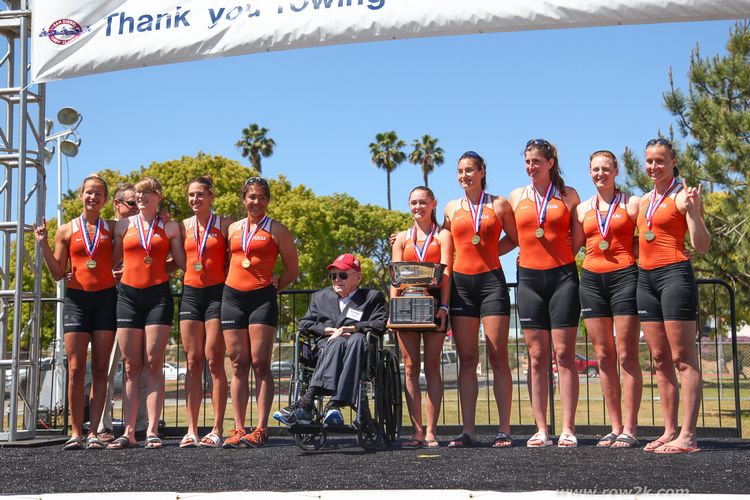 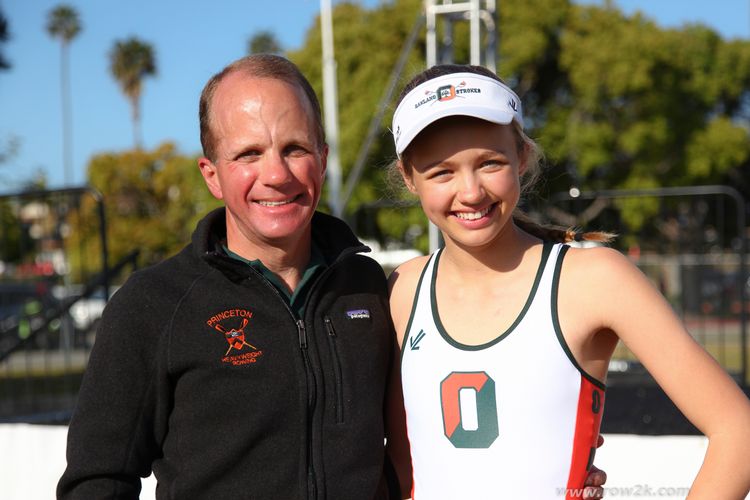 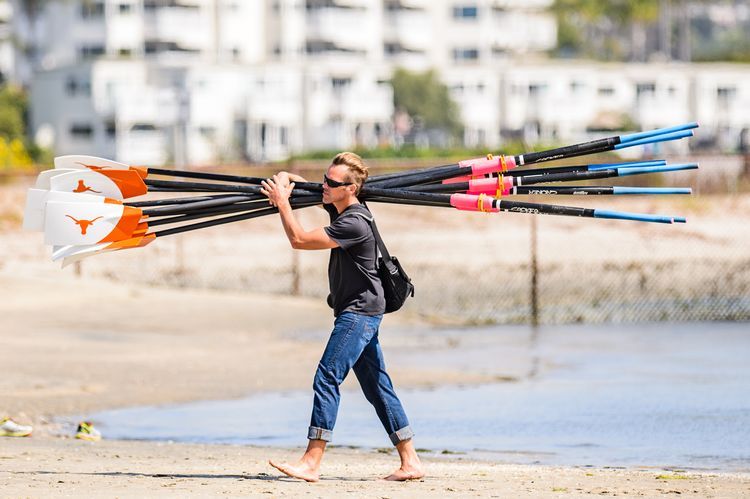 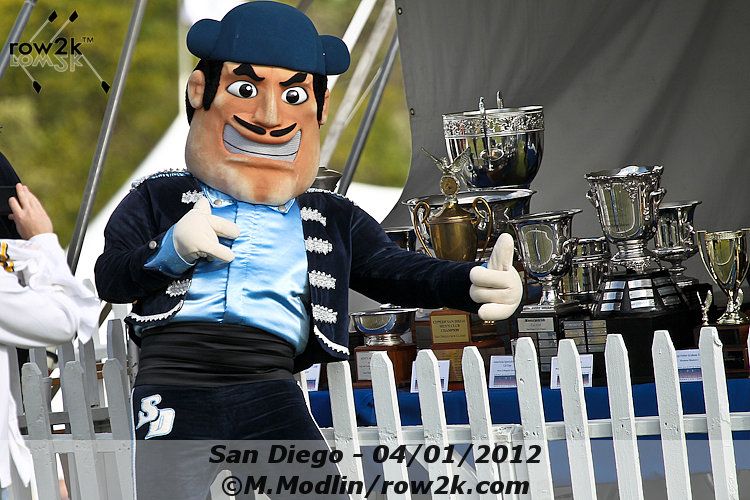