The final day of the 2016 San Diego Crew Classic is the awaited day where the trophies and medals are sent home with the champion crew. After Saturday's dramatic sunrise sunrise, come Sunday drastic fog conditions pushed races back approximately one hour; fortunately, the fog did not seem to cloud the focus teams needed to complete day two.

Crown Point Shores continued to brim with supporters determined to keep their eyes peeled on the jumbotron and ears open to the announcements as they anxiously awaited the results. The racing consisted mostly of petite and grand finals set up by Saturday's results, and at the end of the day, the second annual ROWAK (a portmanteau of "row" and "kayak") races concluded the weekend with entertaining 500m battles between 4's, quads, and kayakers.

In the midst of the early collegiate races, a tribute event honoring Joan Lind Van Blom saw her 1984 Women's Olympic Quad do an honorary row through down the racecourse with an empty seat dedicated to her. Van Blom was the first U.S woman to win an Olympic medal, and her exquisite and ongoing talent as a rower made her well known and respected internationally worldwide. Her battle with brain cancer ended at age 62 when she passed away. Words cannot describe how proud people are of her which is why it was so moving to see the support from her dearest crews rowing in her name today.

High School and Junior
After the collegiate and club races left their mark, it was time for the High school races to compete for the prize. An 8-lane course set the scene for the Women's HS Varsity Grand Final, where the Saugatuck women proved their trip from Westport, CT to be worthwhile.

At the 1000m mark, the Head of the Charles champions made a move from third place to first that consisted of power tens that earned them an open water lead. Marin put an end to the back and forth battle for second as they walked away from Marina Aquatic Center with 400m left.

"We pretty much followed what we did yesterday, just with more power," said Saugatuck rower Leila Boley. "Halfway through the race, every power ten, you could just feel the team spirit and that everyone was there and pulling for each other. I think we have a lot to prove because our old head coach left and we want to prove that we are our own team."

In addition, the Men's High School Grand Final champions, Oakland Strokes Rowing Club (OKC), appeared more powerful than ever when they took the lead at 750m and completed the course in 6:30.4 minutes. Some secret power tens that seem to be coxswain, Ben Garrison's favorite calls may have kept the boys aggressive through the duration of the race.

"We put all of our focus on the third 500m," Garrison said. "The start was a little rough but once we got our rhythm, we picked it back up and called our special power tens: 'hang and bang' and 'ice pack.'"

Masters
To complete the 2016 edition of the SDCC, the Masters' Crews took over the last round of afternoon finals, and it seemed that the morning delay only gave the masters crews more time to strategize their race plan.

As mentioned yesterday, many of the masters crews are "retired" rowers who come together and race in a lineup in which they have practiced for only a practice or two, if any. These competitors hold impressive rowing history and serve as idols to all the younger rowers that attend.

One lady in particular, Caryn Davies, stroked Chinook's first place shell in the Women's Masters A final. A graduate from Harvard, two-time gold medal Olympian, and a stroke seat in one of Oxford's victories, Davies retains her top-notch mentality as a retired rower. Similar to most masters crews, Chinook's A boat included women from all over the U.S and only practiced together twice before racing.

"We're always in it to win it," Davies said. "With that boat, it's one of the fastest I've been in and I was really glad to get to be a part of this crew. We're all working hard from our respective stations around the country, and I'd never thought I'd be in a boat that fast again."

As for the Men's Masters A Final, Brown looked like they decided to push themselves to first place during the last 750m, leaving Potomac and Durham to battle it out for second. Potomac Boat Club wanted silver more than bronze to take back to their home in Washington, DC, and they finished two seconds before Durham.

Joan Lind Van Blom
Joan Lind Van Blom's 1984 Olympic quad was not the only boat that rowed in her honor today. After winning the F category yesterday, Long Beach Rowing Association's C boat swept their 8-lane heat with a lot of motivation from their dearly beloved rower and friend.

"Joan had been with us forever," said stroke seat Sherri Kline. "We dedicated the boat to her and all of our uniforms have dedication to her. She will forever be with us in the boat. She is the extra power."

"It is quite an honor to be rowing the Joan boat and feel her spirit there and make some calls," said coxswain Lauren Ritter. "I do love being a part of this boat and they are very wonderful women who inspire me. As a coxswain I feel like you need to know your individual rowers and how each rower responds because each rower responds differently to each call. Definitely adaptability is one of the better qualities in a coxswain."

"The start was really clean, even for the conditions," said bowseat Liz Trond. "It was tidy, very tidy. Our coxswain did a great job of staying calm and controlled, while giving out information (that we were up a little bit). We trusted our coxswain and once we shifted it down to race pace- boom- we started moving and swinging. This team never ever shuts down, backs down, and we were going for open water."

The LBRA women bond by continuing to excel in their individual passions for rowing. They serve as an example of how rowing bonds bring people closer than ever.

The 43rd San Diego Crew Classic was indeed a success. Races ran smoothly and left athletes knowing where they stand as of now. Spring season has begun and teams are left with incentive to train even harder for their next race. Whatever the results may be, every crew benefits from getting faster. Crew Classic is already working on 2017 so we will see what next year has in store! 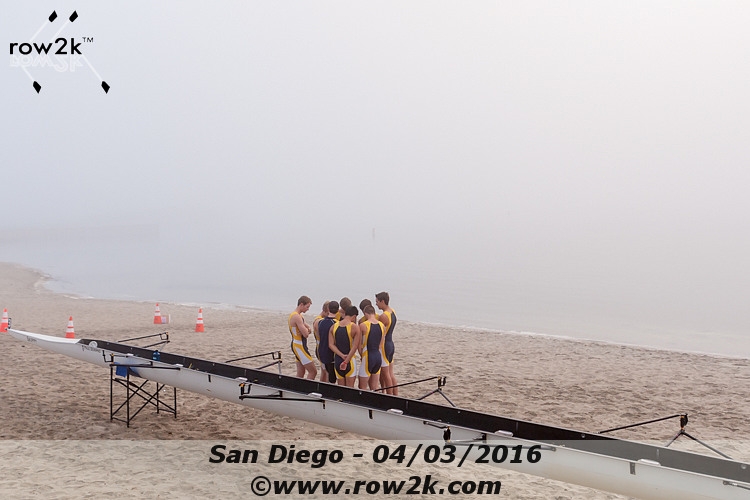