The first weekend of April marks the marvelous start to the 2016 edition of the San Diego Crew Classic as white tents, shiny trophies, competitive athletes, and eager fans pull up along Mission Bay for the annual two-day regatta.

Day one held 69 events in which crews from the U.S and beyond competed down the 2000m racecourse. Soon after dawn, winds accompanied Mission Bay's gentle sunshine, and as the winds grew more aggressive, lining up at the start challenged coxswains to communicate and adjust effectively.

Masters
Following a round of impressive collegiate events, the masters crews took over the course. The compassion that these members have for the sport and each other is impressive; it is inspiring to witness the dedication that these old friends acquire by coming together every rare chance they get and racing as if nothing has changed.

Two masters finals took place this afternoon, the Men's/Women's Masters F+, while the remaining petite and grand finals will compete Sunday' the F+ category requires a crew average of over 60 years of age. 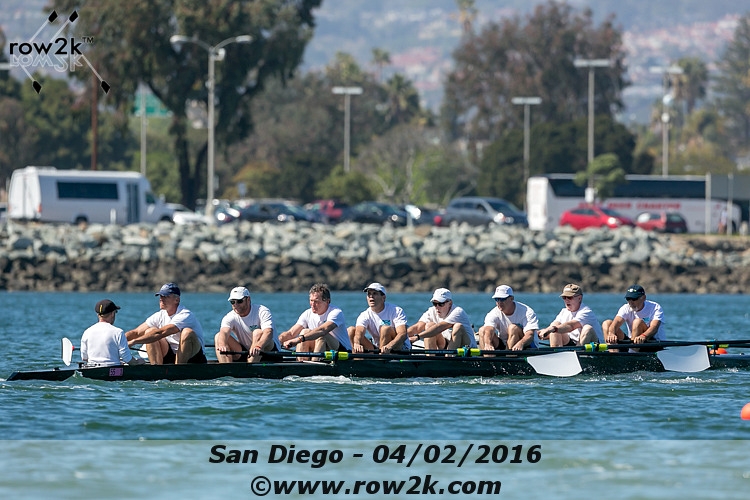 In the men's F event, the Kent Mitchell Boat Club successfully defended their title with a smooth sprint and a lot of rhythm. Crew member Mike Still, an Olympian and World Champion, discussed how the crew comes together each year, noting how little opportunity the boats have to practice together. Still founded NorCal Crew and serves as their current program director; Still shared how the crew comes together for the Crew Classic.

"We have a group of people who row regularly, but we don't have enough people to make an eight, so we row fours," Still said. "So here we bring in all the people who used to row with us at some point in time who were good, but now live in Seattle, or Newport, and all over the place, and we meet here, and at the Head Of The Charles, and we're doing Henley this year."

Asked about the preparation for the race, Still noted it was minimal, a masters tradition.

"We practiced once," he said.

In the women's F event, Long Beach Rowing Association (LBRA) worked in unison to get the gold in their event. These ladies have a timeline of success in their rowing careers and are continuing to maintain their champion strength.

High School Racing
High school races saw teams from all over the map line up to see where they stand with unfamiliar competition as a new spring season begins. On the women's side, Saugatuck’s women’s varsity 8 not only passed the airport test, they dominated the racecourse today as the only high school women to break seven minutes with 6:55.6.

Defending champions the Oakland Strokes put in an efficient and aggressive heat, building on a solid lead with an efficient sprint at 40 strokes per minute to post the best time of the day in the heats for high school crews.

"We executed about the way we wanted to, and we're working on getting the job done," coach Brian deRegt said after the race. "We get a lot of water time, so the guys are fit, and they're hungry to live up to last year, so they're getting after it."

Although earning a spot in a final category is ideal, most rowing people know that the stretches between races can leave the supporters bored and feeling stranded at the racecourse. Enter the Stone Brewing Company stand, which along with the numerous brand tents (as well as the jumbotron) seems to be keeping people entertained as well. Today's racing was a great start to the spring season, proving that no matter where you’re from or how old you are, anything is possible if you stay hungry for it.