The Crew Classic organizers and Chamber of Commerce got the weather they wanted today. It is warm and sunny and the sea breeze held off for much of the morning. Good thing too with racing starting at 7:20 on eight minute centers.

The California men's team, guided by Mike Teti, have won the last three Copley Cups, the invitation only event for varsity eights. Previously, with then head coach Steve Gladstone, Cal took home the gold medals from 1999 to 2005. Gladstone is now head coach at Yale and Elis came into the regatta highly touted. So is anybody surprised that they both won their heats easily? Yale finished ahead of Drexel, who in turn held off Oregon State. Cal crossed the line at 26 with a much faster winning time. But the races were not run consecutively due to a minor breakage issue. All eight crews race together tomorrow, and it will be a full pull for all to lend some clarity for the early season. Later in the morning Cal and Yale dominated their heats of the 2V with Oregon State winning the third heat. 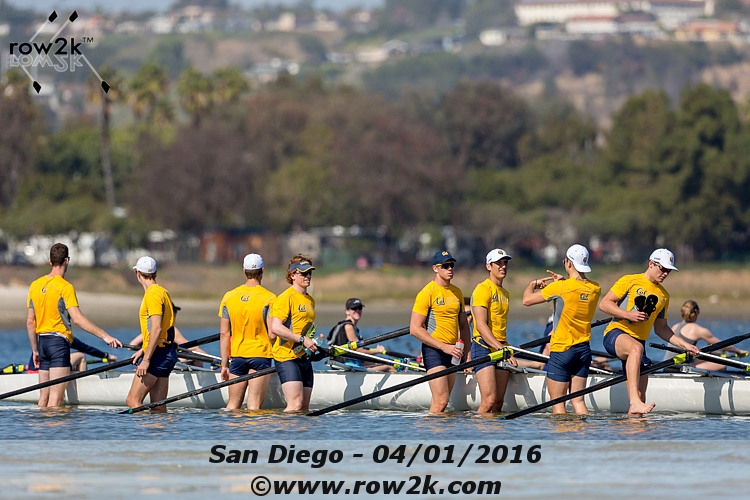 Day 1 of the Crew Classic brought primo weather for the collegiate heats
The Whittier Cup heats were more hotly contested. Wisconsin and the Cal women swapped the lead a few times with the Badgers prevailing in a photo finish by .05 seconds!

"We had a really good first day," Wisconsin head coach Bebe Bryans said. "It was what we knew we could do, and so it just turned out that we ended up being pretty fast doing that relative to other people. So that was pretty exciting."

Washington State reversed last week's narrow loss to Gonzaga by a few seats, while USC, seeded into lane two, looks well-positioned to defend their title after winning their heat over Texas. The Longhorns held off third place UCLA by .3 seconds, with the local USD Toreros not far back in fourth. So the eight lane final should be a bit of a preview of the NCAA, Pac 12, and WCC races all in one. Cal, Texas, and USC all won their heats of the 2V8 and four. Remember, it is a team sport!

"We really want to prove that we belong in the top 20 in the country, and that we are performing well and are on par with those top teams in the country," USD coach Kim Cupini said. "I think the eight's performance today definitely shows that." The crew is looking forward the finals.

"This will definitely show the country how we've been feeling this entire season," Uche Anywanu of the USD V8 said after the race. "That we are the underdogs, but we have a lot of speed and a lot to build on. We've been working really hard and we hope tomorrow we can show everyone how fast USD really is."

The day started off with heats of the men's Cal Cup. Temple edged out a highly regarded Santa Clara crew in the first heat. Purdue and local favorites UCSD took one and two in the next heat. UBC, representing the Canadian influx, beat LMU in heat three, although both were pressured by Orange Coast and Trinity throughout the race.

The women's Cal Cup heats has a lot of close finishes. Tennessee and Loyola Marymount squeezed out Fordham and Portland in heat one. Miami dominated the next heat, and Kansas State, without much time on the water yet, pipped out George Washington. Head coach Eric Carcich of GWU though was excited by his crew's performance. In the third heat another local crew, San Diego State, out sprinted Old Dominion and American Athletic Conference foe Sacramento State.

The line in the merchandise tent to get an autographed coy of The Boys In The Boat was long and enthusiastic. Could sales have been spurred by the race announcer falling prey to the row2k.com April 1 article on the stars attached to the project? Ignore all the retweets unless Bradley Cooper and Liam Hemsworth really will appear as the heroes of the story.

Local TV station KUSI was doing a bunch of live hits from the venue - rowing on TV! Gotta love it.