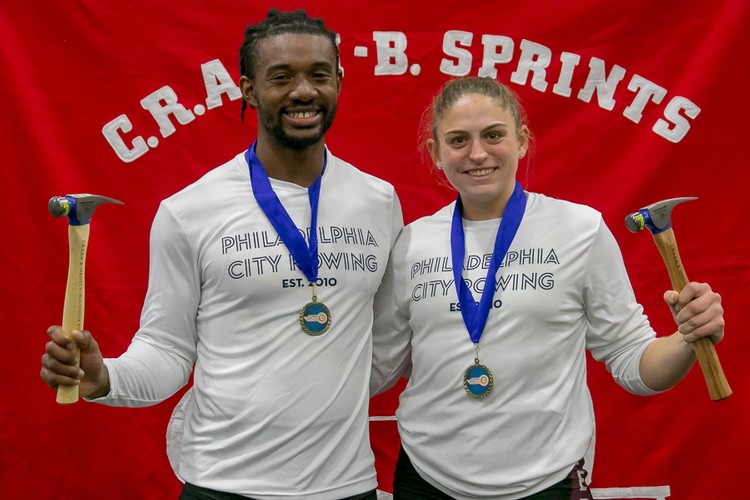 The CRASH-Bs may have competition as the world championships of indoor rowing (sic capitalization, see more below in the Notes), but you'd be hard pressed to notice too great a difference; it's still a really hard 2k on the ergs in a big room full of people.

The 2020 edition of the CRASH-Bs is newly partnered with USRowing, creating the "US Indoor National Championships," so there you go: the March 1st event gave us our first set of 2020 USA national rowing champs, and another crowd of folks pulling, grinding, and gunning for glory and that coveted hammer.

This year was the second year of the competition running at the BU Track & Tennis center, the event's eighth venue since its founding 40 years ago. With 60 ergs going at a time, the arena felt full, and the added benefit of no longer rowing ergs on top of an ice rink made the air feel a touch warmer.

OPEN, LIGHTWEIGHT & U23 EVENTS
The regatta's late date, and the fact that in an Olympic year, fewer elites make the stop in Boston to erg, definitely thinned the ranks of the open and lightweight events somewhat, but the competitors will not have minded; they came to race. 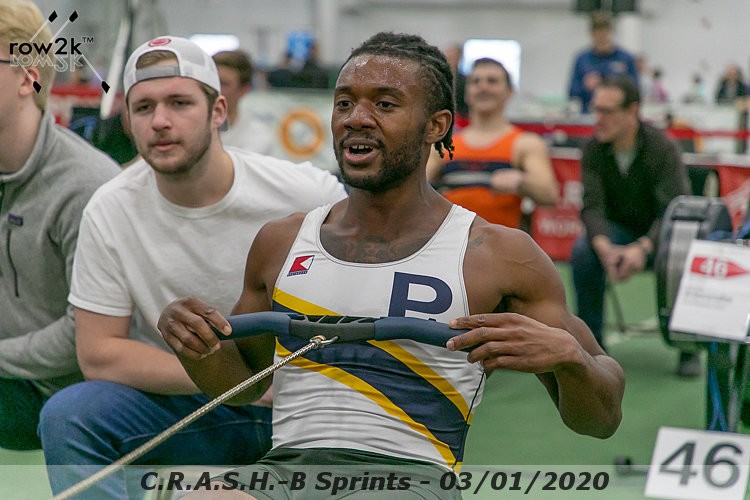 Penn AC's Marqus Brown set the tempo in the Open Men's event, taking his first hammer with a time of 6:00.7. "I thought it was really good," said Brown. "I hurt in a different way, I'm still coughing now. My legs didn't hurt, but my lungs and chest are burning. I only broke 6 last month, so I'm feeling really good and getting faster on the erg and on the water while the [rest of the Penn AC] guys are still down in Florida training."

In the Open Women's event, Vesper's Gabi Thomas completed the Philly sweep, winning in 6:55.9, the fastest women's time in the building on the day. "Honestly, I think I had full intention of winning," said Thomas after the race. "I really wanted to come last year, but I was finishing my last year at Temple. So I decided to make this a goal of mine first year out of college to row fast enough to win a medal. I looked at the results from last year and compared it to my times this year, and I really thought I had a solid chance." 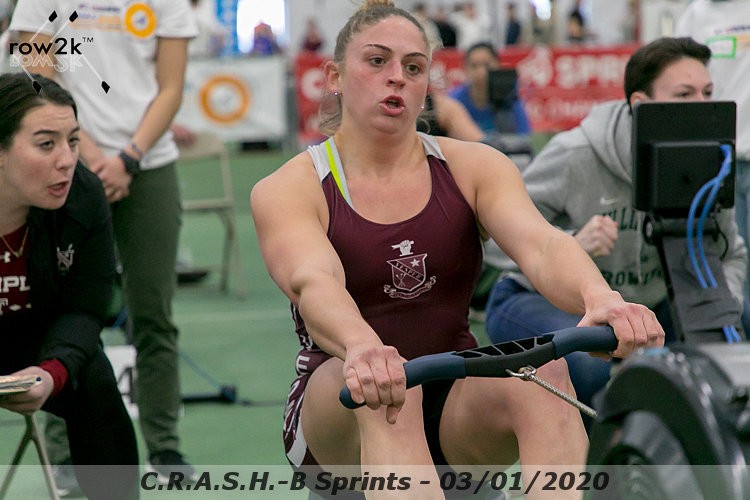 As Thomas explained, the connection between the two winners from Philadelphia was not incidental. "Marqus and I are good friends, we coach together at PCR in Philadelphia, he had a full intention of winning, and I'm really glad that he did. It was awesome. We've been training back and forth on the erg, and so it's been a lot of fun."

Both Thomas and Brown said they wanted to use their good results in Boston as a stepping stone to their on-the-water results. "My next step is just to keep grinding with the team at Vesper," said Thomas. "They're a really solid group, and I want to see how fast I can go with them. I just want to use the erg as the tool to find more speed on the water."

The Lightweight and Flyweight events were an almighty jumble of athletes in 2020, with collegiate, U23 high school and open competitors all mixing it up in the same event, a result of the elimination of the junior lightweight categories this year.

Notre Dame's Josh Turk set the pace for the 165. lb and under men at the regatta, taking the U23 Lightweight event in 6:19.5, the fattest skinny erg (or is it the skinniest fat ergo?) of the day, while Riverside's Alex Twist took first in the open Lightweight event in 6:21.9. For the Flyweight men (140 lbs. or less), Stephen Grant of the Los Angeles Rowing Club made the most of his long haul to Boston for the win, taking the event in 6:49.1

On the lightweight women's side, Sophia Luwis notched a huge, 31 second margin of victory in the open lightweight event, and her time of 7:10.3 would have placed Luwis second in the Women's Open category. Haley Higginbotham took top honors in the U23 Lightweight Women's event in 7:17.9, while MIT's Brigid Bane won the Women's Flyweight in 7:47.0.

JUNIORS
Whether it's a world championship or "just" the indoor national championships, the Junior events at CRASH-Bs once again drew the deepest entries, and also provided some of the biggest highlights and wildest racing.

The star of this year's CRASH-Bs, though is likely one of the more understated stars you'd ever meet, was 16 year old Isaiah Harrison, who rowed the fastest time in the building enroute to winning the Junior Men's U19 event, a blistering 5:53.2, which not only was a personal best for Harrison, but also set a new American U19 record (formerly held by none other than a guy named Clark Dean), and improving Harrison's own world record in the 15-16 year old age group.

"I have the ability to push through things," said Harrison after the race. "I'm really thankful for that." See our full feature on Isaiah here. 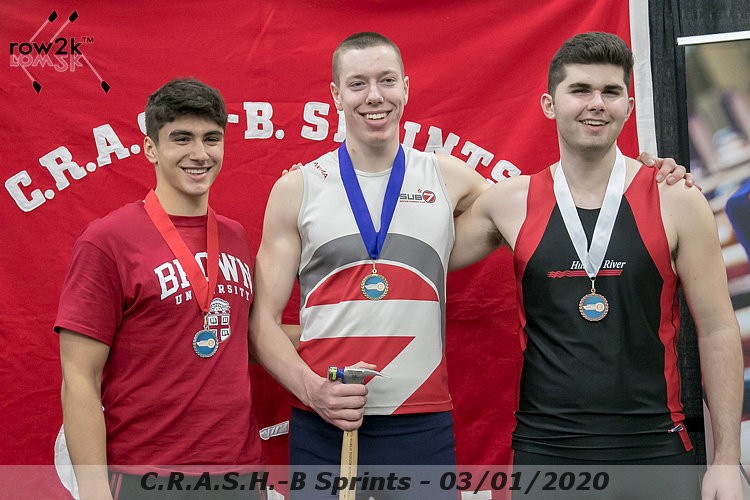 In a nifty new feature at CRASH-Bs, the jumbotron race display showed a virtual pace boat of Dean's American record running next to Harrison's result in real time, which was a real crowd-pleaser; deep in the race, with Harrison running just ahead of Dean's pace, the spectators got into the act, urging Harrison on.

There are now four Junior age categories at CRASH-Bs, and by any measure they've been embraced. Matthew Marks of the Bedford Crew Club claimed the Junior Men's U17 event in 6:33.2, Matt Califano took the Junior Men's U15 event in 7:42.1, and Niskayuna's Lance Workman took the Youth Men's (13-14) 4-minute event.

"When I first got in, in 6th grade, it was hard for me to get to a good split," said Workman. "You have no idea how to row, and then someone teaches you and it gets easy and easier as you progress time."

When asked whether he liked erging, Workman was candid about his motivations. "It's something my dad likes for me to do." 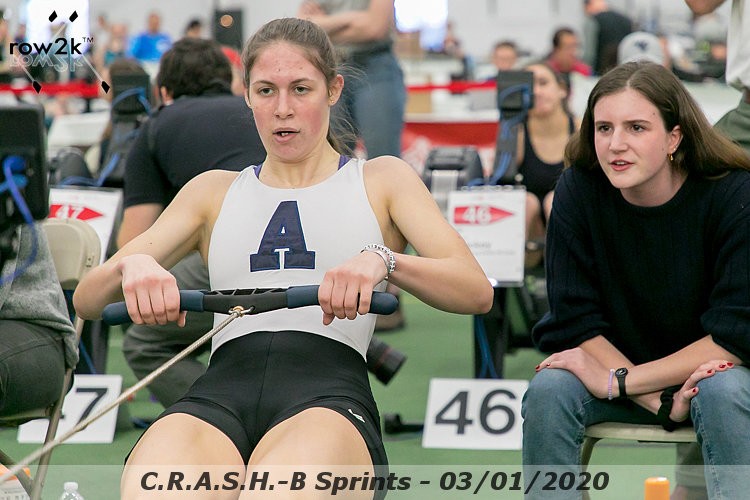 Phillips Andover's Mia Levy took the Junior Women's event in 7:09.0, which is more remarkable for the fact that Levy, like many other students at most of the New England independent schools, don't have regular access to winter training for rowing.

"It was an unofficial winter sport, but I was erging with a few of my teammates, we were all training together over the winter and got a little feedback from our coaches," said Levy. "I was a little bit off my goal split today, and that was frustrating, but I'm happy with my race. I know there's a lot I can work on."

The fastest time in the Junior Women's ranks was turned in by Port Rowing's Reilly Katz, who spun a 7:08.9 to win it. Claire Uiterwyk won the Women's U15 event, while Rebecca Schmidt took the Youth Women's (13-14) event.

Schmidt had some family company on the podium as her older sister Heather took second in the Junior Women's U17 event, and as Schmidt explained, family ties played a huge role in getting her on the erg. "My sibling started rowing, and then I just followed their footsteps. I actually take my brothers splits, and my brother and sister's times, and I compare them with mine and try to row farther than them," said Schmidt. "I love erging. Sometimes before the season, we go to the high school when school was out of session just so I could erg."

MASTERS
Yes Dorothy, there is some very fast rowing that goes on after age 25, and yes Dorothy, you have to train to go that fast; these folks don't just roll out of bed and throw down. For the Masters rowers we talked to at CRASH-Bs, putting in the work to perform was a huge part of the process.

"It's that mentality of committing to a process," said Steve Krum, who captured the Men's Masters 60-65 category in 6:35.3. "I believe that process equals outcome, and that we do have to have a process. You have to train. You have to push yourself. You've got to train at a certain level, and you've got to show up." 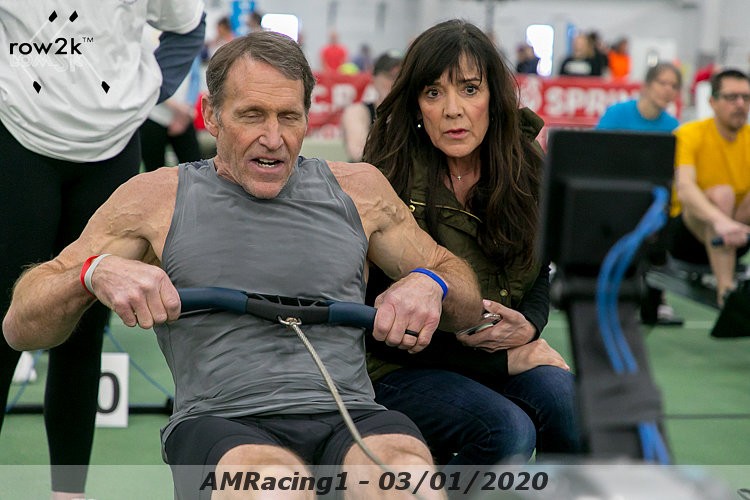 Men's 70+ winner Larry O'Toole, of Boston's Gentle Giant Rowing Club, concurred. "With Boston traffic being so bad, I leave my house at 5:30 at the latest. This way, you can go ahead and work out before the day gets going, and you don't end up interfering with your busy life. It's what I say to people who tell me, 'I'm too busy, I don't have any time to work out.' I always ask, 'what were you doing at 5:00 this morning?' Sure enough, they were asleep."

"As Arnold Schwarzenegger once said, 'Sleep Faster!'" chimed in Krum.

"I'm training pretty heavily to get where I'm at," said Jordan Falcone, who won the Women's Masters 36+ in 6:59.4, the second-fastest women's time at the event this year. For Falcone, who comes from the Crossfit world, the crossover between "real" rowing and Crossfit rowing has had tangible benefits. "I started rowing 5 years ago, then I started working with a coach who also rows on the water this year, in addition to my Crossfit coach. The mix of the two has really helped and changed the way I row overall. Compared to three years ago, when I was only rowing at Crossfit, it's a little bit of a different world now." 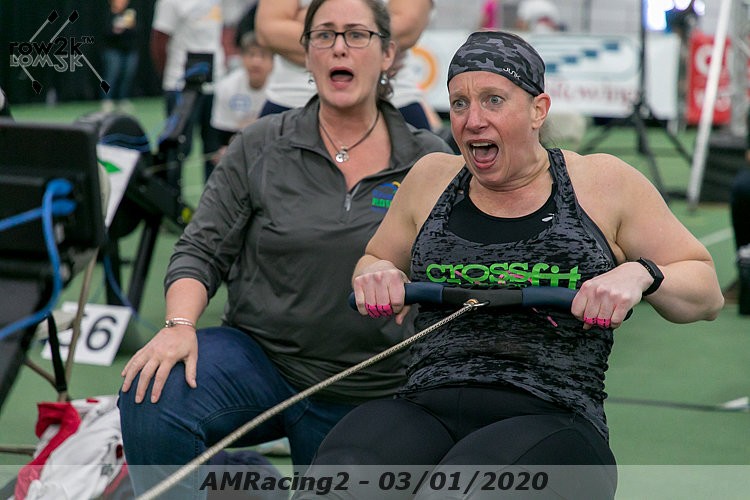 Even as rowers into their 60s and 70s are still able to pull fairly beastly times, it's the oldest rowers at CRASH-B who garner some of the loudest applause, as well they should; folks who are rowing well into their 90s are living proof of the admonition to "keep moving."

Dottie Stewart, rowing in her umpteenth CRASH-Bs, took yet another hammer at age 98; Stewart had the crowd on its feet as she finished the piece, and celebrated with a very appropriate 21st century flex when she finished. 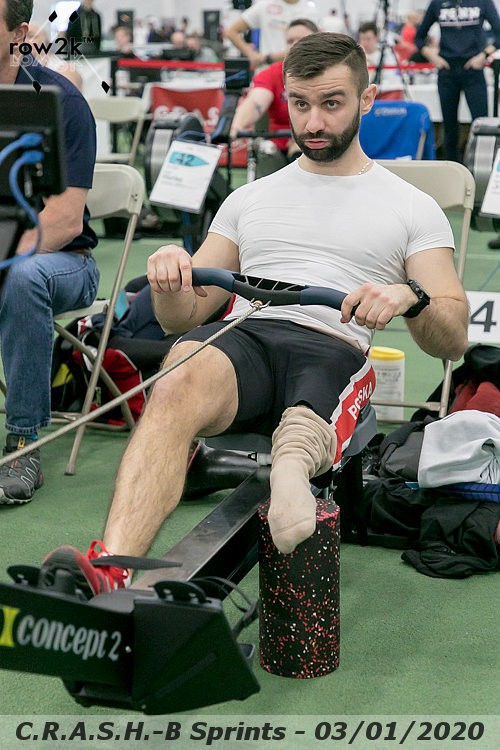 PARA & ADAPTIVE EVENTS
The CRASH-Bs continue to be fairly unique among championships in the American sporting landscape in that they offer a broad range of Para-rowing and ID (intellectually disabled) events at the competition.

It's also part of the genius of the much-loved Concept2 erg that it can be quickly reconfigured to allow modifications for disabled athletes; as far as inclusivity goes, indoor rowing is ahead of the game. And while many champions were crowned in the adaptive events, the opportunity for these athletes to even compete was immeasurable, and inspiring. (As we overheard in the crowd, "that man just rowed a 7:27 on one leg!").

The athletes and their families themselves are a tight group as well; of all of the awards ceremonies held at CRASH-Bs this year, the awards for the adaptive athletes brought out the deepest, warmest crowd of supporters, and the athletes celebrated themselves and each other.

As growth in rowing continues to offer avenues of competition for disabled athletes, it's great to see the indoor rowing world keep pace; see our full feature on some of the CRASH-B para racers here. 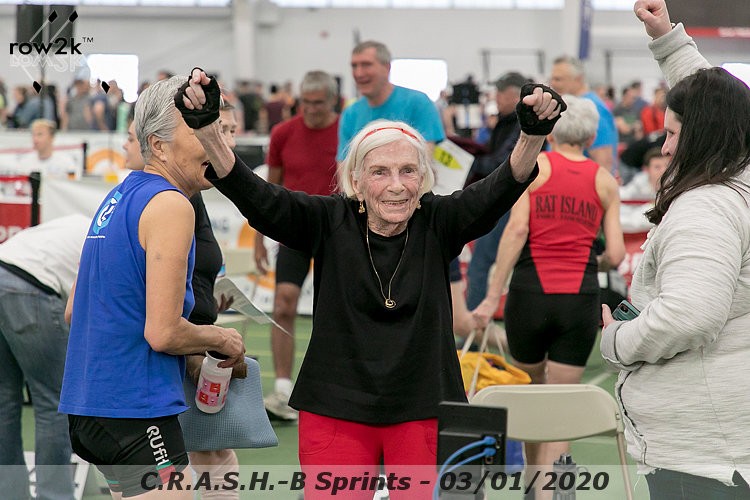 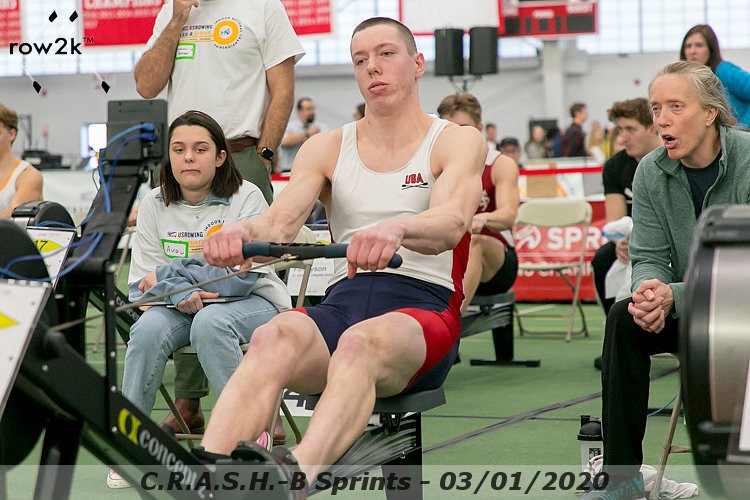 Isaiah Harrison: A Force on the Erg 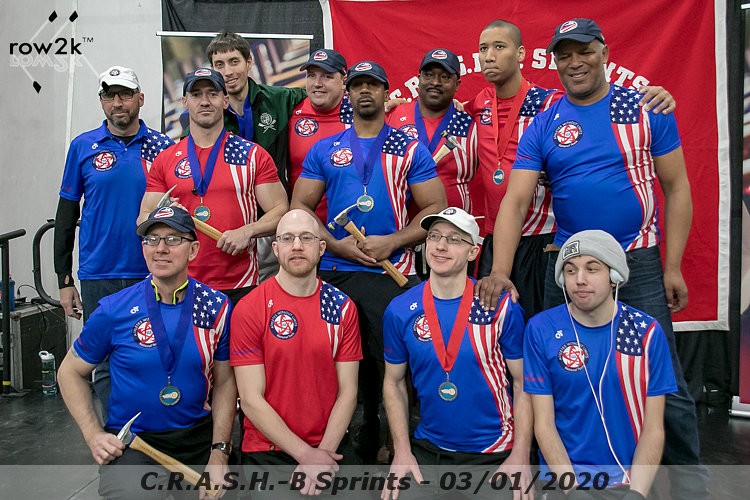