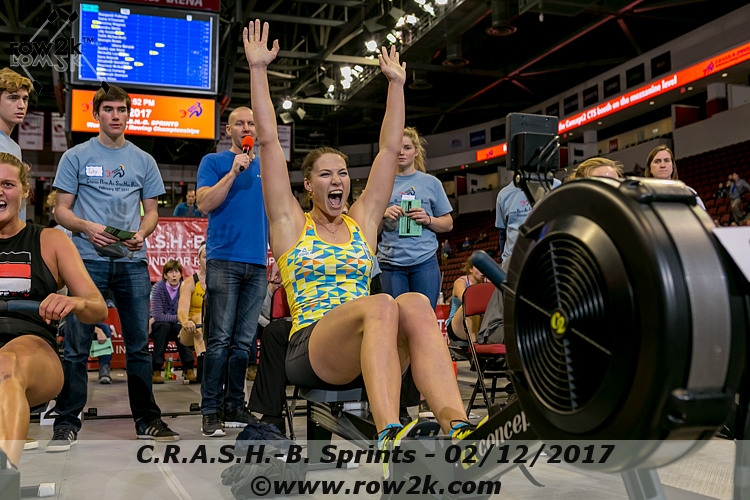 The 36th CRASH-Bs were run against a backdrop of a chaotic weekend of weather in Boston, where the second blizzard in three days blew through outside of BU's Agganis Arena during the competition. Fittingly for the time of year, even though the weather outside was frightful, the erging inside was, if perhaps not delightful, typically hard and fast.

As is often the case, the last individual race of the day brought the day's fastest times. Polish National Team athlete Bartosz Zablocki pulled through longtime CRASH-B competitor Pavel Shurmei of Belarus in the last 500 meters for the win in 5:45.8 - while the silver (medal) lining for Shurmei was setting a new world record in the Men's 40-49 category of 5:47.8 in the race. Cuba's Angel Fournier Rodriquez was third.

"Thanks to the people in the stands, they were amazing," said Zablocki. "I tried to row the first 1000 relaxed, then the last 500 meters I closed my eyes and went for it." 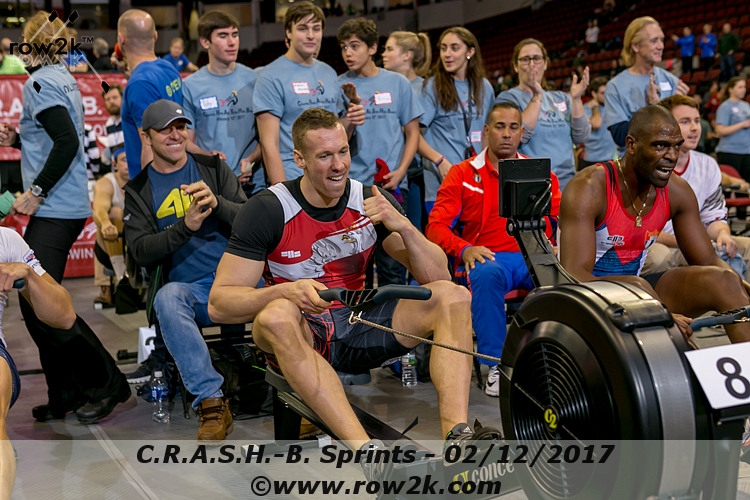 The Open Women's race was close for the first 1k, with Australia's Georgie Rowe setting the pace early. But the second half of the piece saw Ukrainian W4x Olympian Olena Buryak pull away enroute to a win in 6:33, her second win in Boston after winning in 2013. Rowe finished in second at 6:40. 4, with Netherlands rower Jose Van Veen in third in 6:41.7.

"It was hard, because I was ill for the last month," said Buryak. "I spent a lot of the time lying in bed. I came here and thought I might go 6:45, but this girl from Australia, she was in front of me until 500 and then I wanted to scream. It was hard because there is no more oxygen; it was hard to breathe, but it's okay."

After her win, Buryak was drafted on short notice by Shurmei, her husband, to row in the four-person relay race. "He felt very ill after his race and said, 'you row in the relay,'" said Buryak, who gamely joined in and helped the relay win. "I said, okay, then I needed to make one more 500 meters, but I'm still alive, so it’s not so bad. Now, I have two hammers."

Southern Cal rower Sam Melvin brought home two hammers in the lightweight category, taking the overall and the U23 titles with a 6:14.6. Melvin said he aimed to keep it simple. "I wasn't sure how I was going to do today, but you can't really focus on what the other guys are doing, just race your own race." Florida Tech (and Spanish LM1x) rower Jose Gomez Feria took second place and the collegiate title in 6:16.1, with Alex Ridenour in third in 6:20.0.

The Women's Lightweight saw a hometown one-two today, with Riverside's Erin Roberts (6:58) and Hilary Saeger (7:06) taking top honors. Finishing third in 7:19.7 was high school athlete Annie Phillips of Y Quad Cities, who took home the hammer in the U23 category in the event. Because CRASH-B rules limit HS events to athletes who will not turn 19 during the calendar year, high school athletes who don't make the age cutoff race in the Junior/HS events, but have their times ranked with the U23/Open competitors in their event.

The Junior racing at CRASH-B once again produced not only great results but also some wonderfully pure moments of rowing camaraderie and competition. Junior Men's winner Joe Johnson of DC's Gonzaga Academy has been here before, finishing as runner-up last year. But he sealed the deal this year, going 6:00.4 for the win ahead of German Moritz Wolff. 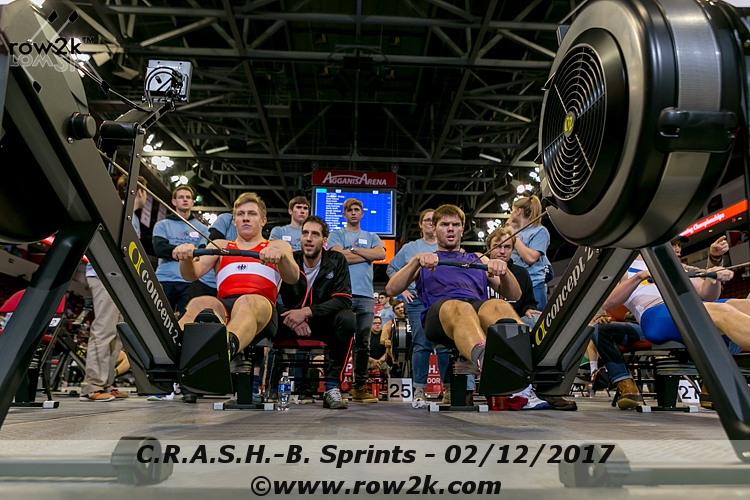 "I've heard this tossed around a lot today, that this is a difficult venue to perform at," said Johnson after the race. "I don't really put much credence into that, but I gave it a little bit today. I PR'd on the erg last week, but it just felt a little heavy this week. I knew I had some very, very fast finishers behind me. So, even if I was ahead, I was worried that they might spring back, just because of the nature of the beast."

For Germany's Wolff, the CRASH-Bs might have been a little bit of a letdown. Wolff set a World record of 5:58 for the Men's 15-16 just a few weeks ago, while finishing 6:08 in Boston. If he was disappointed, he didn't let on. "This was my first time in USA, and I would like to come back here," he said. "We were the only jet to land at the airport in Boston during the blizzard on Thursday, so I felt the pain from the jet lag in the race. I thought that maybe my time might be better but it's hard to eat healthy food here."

Another 2016 runner-up who improved to the top spot this year was Connecticut Boat Club's Kaitlyn Kynast, who just missed a PR in winning the Junior Women's event in 6:50. "It was by far the most consistent 2k I've ever done," said Kynast. "It was not a PR, so I am a little bit bummed about that, but with all the pressure and build up of crash week, pretty happy about my performance. This is my first hammer, and I'm so excited!" 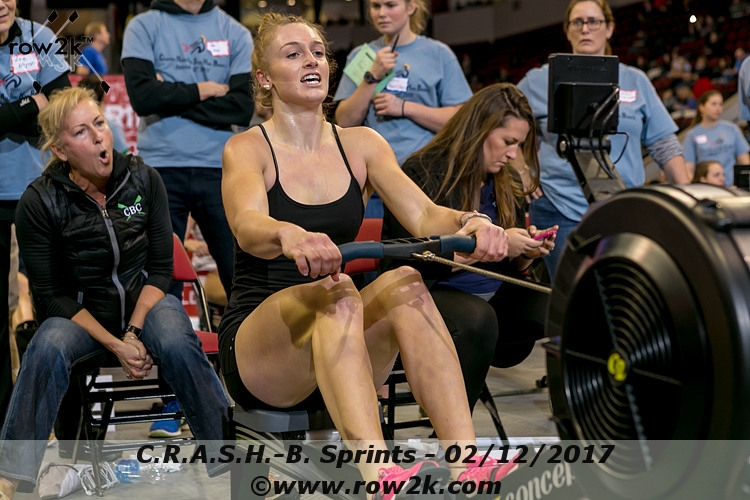 Kaitlyn Kynast of CBC ran away with the Junior Women's race

Racing in the Junior Women's Lightweight event, 2016 Junior World Champion Caroline Sharis recycled her Junior Worlds race plan to break free from the pack with about 750 to go to go on to win in 7:15.2. "I just wanted to row my own race, and just really get off to a good start," said Sharis. "I decided to go for it around 750, and was able to bring it home today, which was really cool."

Similarly racing from behind, Henry Bellew of Bethesda Chevy-Chase used a strong sprint to win the Junior Men's Lightweight in 6:21.0 by just 7/10s of a second over Mile High RC's Gregory Cain. "I'm really happy that I was able to achieve that; put it all to my coaches and teammates who supported me and got me here," said Bellew after the race. "This summer, I learned that when you have 500 meters, 400 meters left that's when you can beat someone, that's when you can come up on guys, saying 'I'm going to be crazy enough to go before they do.' So, I figured that's what I was going to do here."

Junior rowing is all about priorities, as exhibited by one of the winners after his race: "OK, I need to find my water bottle, and then I need to call my mom."

If the kids come to work, then the Masters come to enjoy themselves. Even after suffering through a 2k, the Masters competitors at CRASH-B rebound quickly, comparing times, and celebrating their athletic longevity.

"I tried two years ago, and didn’t work out that well," said Men's 30-39 winner Ante Kusurin of Croatia after his 6:00.8 effort. "I started training for this one a little bit earlier and felt really good. It's always hard to produce a good result here, because it's so dry and there are so many distractions, but I absolutely enjoyed it. I got a ton of help from my guys back in Croatia. Shout out to my coach, and a shout out to Damir Martin, the Croatian single rower, he's been really following me and helping me out with my training programs."

Especially in the women's masters events, athletes who have found their way to rowing later in their lives are blossoming on the erg. "I started rowing about 2 years ago, when we did a challenge at the gym, and I've just been on the erg ever since," said Women's Masters 30-39 winner Jordan Falcone after posting a 7:00.6. "I row at CrossFit with my coach, and I love it."

Asked if there is a big difference in style and attitude between "rower" rowers and CrossFit rowers, Falcone said there were differences, but really only of nuance. "Traditional rowers row a lot slower and more gracefully than a crossfitter," she said. "I think we tend to go at a higher stroke rate than what regular rowers do, so there's a difference to the cadence. There are some great people in the online rowing world who really make it easy, and many of the rowers who are traditional rowers, they've coached me along the way with how to do it. They've encouraged us to come out to this." 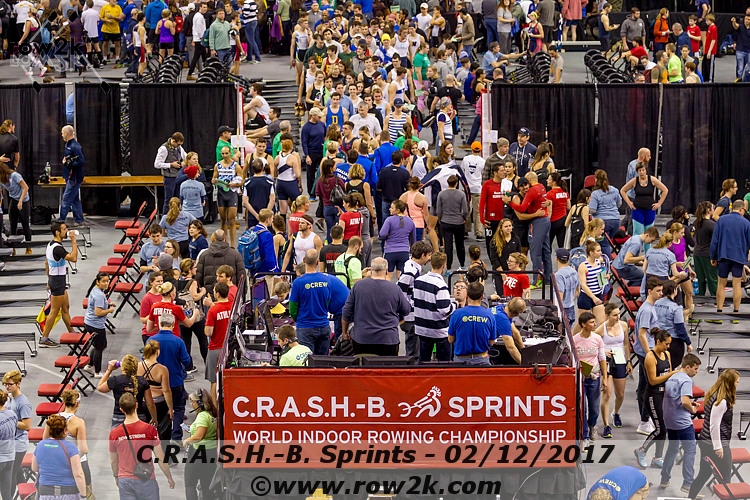 Lots of activity at CRASH-B

"This is a very important, very special event," said Italian competitor Francesco Maddotto, who claimed a win in the Men's 75-79 category. "I have won twice here, and have come in second twice," said Maddotto, who raced in the Italian M8+ at the 1960 Olympics in Rome.

Once again this year there was seemingly no upper limit to doing your bit on the erg, as 94-year old Dean Smith and 95-year old Dottie Stewart claimed wins in their categories in Boston.

Ultimately, the erg is about staying healthy, and the competition is the icing on the cake. "The erg is boring, but it keeps you fit," said Germany's Matthias Schomann-Fink, who won the Masters Lightweight 30-39 category.

The Adaptive events at the CRASH-Bs attract a diverse and inspiring group of athletes, and there are now 29 adaptive events at the regatta. For Tom Darling, adaptive coach at Community Rowing and also the Director of Adaptive and Para-rowing for USRowing, the camaraderie and support shown to (and definitely by) the adaptive athletes is hugely important.

"I think, from what I've witnessed, it has no difference than an able-bodied athlete," said Darling. "You need friends to row with, coaches to help you, equipment, all those same things. When you have leadership, friendship, and service within the program, you create that culture because everybody's in it for each other. I think you see that across the board."

Darling also emphasized the importance of the inclusion of adaptive athletes in events such as CRASH-B. "I think it just recognizes their hard work, their success," he said. "Recognition that the programs are working and are being recognized for the success. Because we can't do this adaptive rowing without building a culture of support. Our community rowing programs and boat clubs are essential to that."

As if to mirror the weather outside, technical glitches bedeviled the organizers somewhat, with results delays creating a drag on awards ceremonies while the odd event winner had to grab their hardware and jet in order to escape the weather chaos snarling travel in and out of Boston.

As the regatta wound down, and with an 8pm "declared snow emergency" bearing down on the venue, row2k caught up with CRASH-B Commodore Laura McFarlane for a rundown of the day.

"I think this event continues to bring an absurd level of athleticism and excitement," said McFarlane. "From the very first race of the day all the way through all the age groups, all the ability levels, the energy was great."

McFarlane also reflected on the place the regatta continues to occupy in the pantheon of rowing events. "Whether it's the athletes just being great sports or the audience being here all day in ridiculous weather, I think that's the highlight for sure," she said. "For the event, you've just got to be here, and I think that is a Boston thing. You just want to be a part of it; whether you're the superstar, or just a regular athlete on the street, you want to be here, and that's still pretty big." 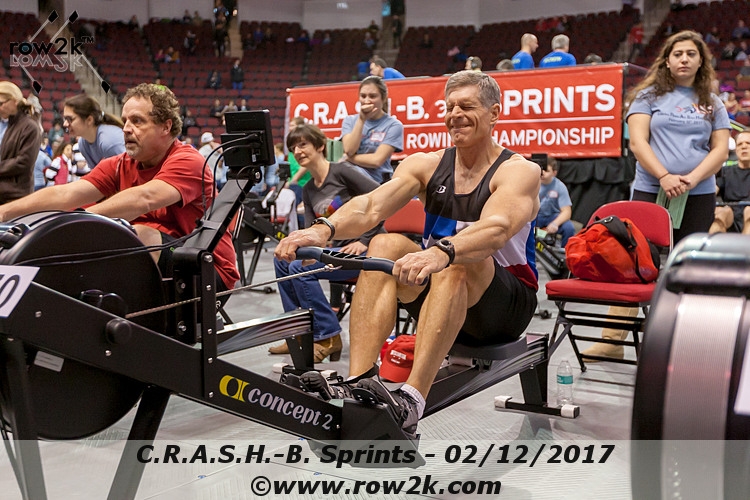