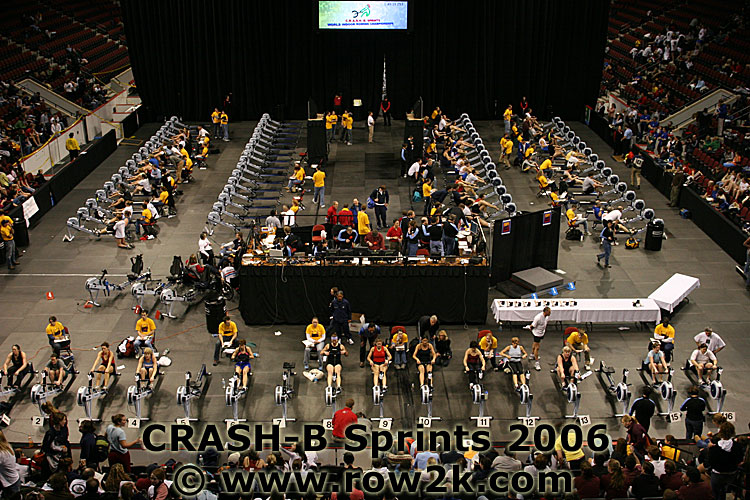 After 25 years, the CRASH-B has changed with the times. In the thoroughly modern, one-year-old Agganis Arena, a junior rower was observed warming up with one hand on the oar handle, the other cramming a cellphone to his ear, paddling lightly just minutes before his event.

In addition to solid cellphone signal, the arena has another unbeatable amenity – a pizza stand on the concourse. Despite the dangerous juxtaposition of extreme rowing and lunch, few people seemed to lose the latter this year, which may also be testament to an improved environment for the event.

(According to CRASH-B organizers, folks at Agganis were slightly taken aback by their request for extra trash cans on the racing floor – particularly once they realized that the reasoning was to provide more bins for people about to lose their lunch. When arguments come up about what the toughest sport is, one thing you might throw in is that not too many sporting events have to plan ahead for barfing.)

The most immediately obvious improvement came from what seemed to be an immediate shift in thinking on the part of participants when given a proper arena in which to row – far more rowers hit the dressing room and turned to simple spectating. Whereas in the past many folks rowed and bailed, at Agganis the stands were full all the way around the competition area for most of the day. Arena execs put attendance at 2500-3500 minimum, and a lot of those people were in the stands throughout – it is a great venue for the event.

Life at 25 was not without growing pains, but it tends to be a resilient age (as dramatically displayed in man of the Open events). During setup on Friday night, it was discovered that some monitors would reset without reason; the reason was uncertain. The racing floor was set up directly on top of the ice of the hockey arena, and it was discovered that the motion of the people on top of the ergs on top of the rubber floor on top of the ice was causing static electricity to gather and release, messing with some monitors. (Apparently this is not an uncommon problem with the specific flooring that was available; I can report getting a few small shocks as I worked the camera on the racing floor.) a solution was found – lightly spray water on the floor periodically – and the event went off without trouble.

Adaptive rowing was given a spotlight when four British competitors rowed on very tricked out ergs that provided electric stimulus to their quads on the drive, and to their hamstrings on the recovery, creating the impulse for the back and forth of the rowing motion. If I get it right (their coach/trainer is a British academic, and had the accented mumble to match), each charge was 150 volts of electricity – not inconsequential.

The only world record of the day was set by Stephen Richardson from Squamscott Scullers, who rowed a 9:17.5 in the men's 85-89 heavyweight division. The college men's title was taken by Warren Anderson, who rows for Loyola Marymount, a very impressive result for a walk-on senior. As we have found out from watching the rosters of US national teams, and particularly the men's right, there is no monopoly on horsepower at the "traditional" rowing schools.

Nonetheless, the racing was outstanding in places, with several folks truly going to the wall – Italian lightweight Elia Luini crossed the 500 gone mark on a 1:28.9 split, and his countryman Dario Dentale was so spent after the event that he was on the floor until the medal ceremony – arguably until after the medal ceremony, as it was delayed 10 minutes while medics tended to him. They wanted to take him off on the cart, but he stuck it out and made it to the medal stand. For rowers, it was a spectator sport – even Dentale's teammate Luini was gleefully taking his picture with his head in a bucket.

Thus, we say happy 25th to the CRASH-B, and toast to lots of water time for everyone from here on out.

back to top
Get our Newsletter!
SUBSCRIBE
Support row2k!
If you rely on row2k, please support row2k!
Advertiser Index
Advertise on row2k