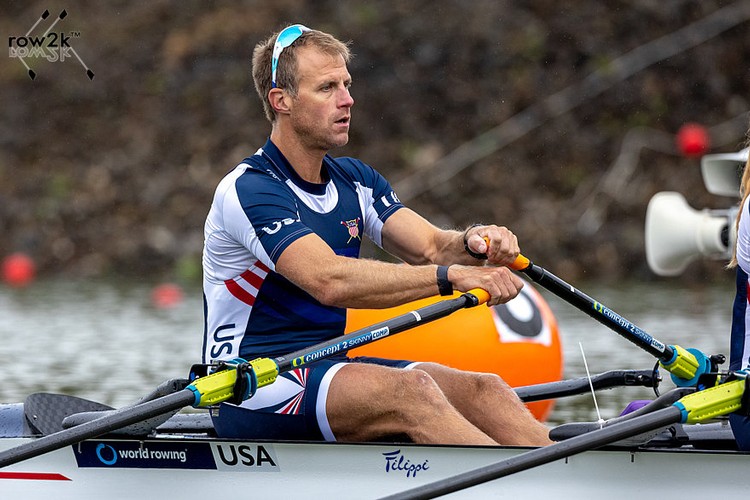 Todd Vogt at the 2022 World Championships

Ned McCall trains at Portland Boat Club alongside Todd Vogt and Pearl Outlaw, who are representing the USA at the 2022 Worlds in the PR3 Mixed Double.

In the following letter he sent to friends and has allowed us to publish on row2k, Ned offers a unique perspective on training alongside dedicated para athletes that not all para athletes tend to emphasize or even care to dwell on, focused as they are (along with most elite athletes) on the goal and not the obstacles.

Of his own rowing, Ned shared that he started rowing at Choate when he "realized I wasn't good enough to play Varsity Baseball, and try to train 6 days/week and I race every boat class imaginable with Portland Boat Club and the North Dakota Indoor Rowing Team (NDIRT)."

It is worth noting that McCall is typically joined by US Olympian Tiff Wood in their training sessions alongside the mixed double.

I've watched Todd's Parkinson's progress from his initial diagnosis. His long-term goal is to compete in the Paris Paralympics, but he has a progressive disease, so he knows he's running a race against time.

With that said, Oregon Health Sciences University (OHSU) is watching Todd very closely because it appears the sheer volume of work he's doing - 12 training sessions/week -- may be checking down the progression of his disease. 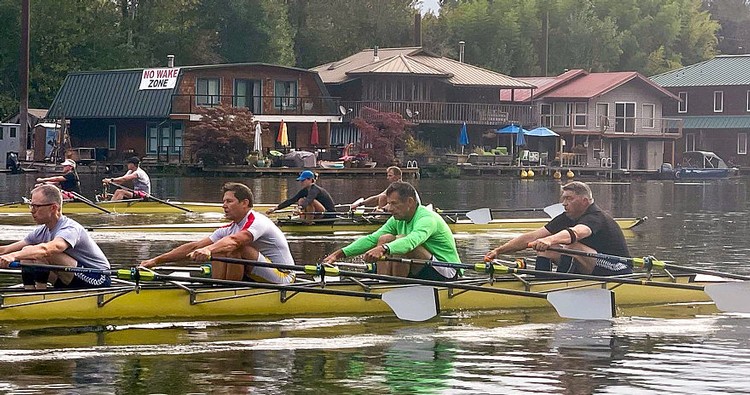 McCall in the three seat of the quad racing the US PR3 Mix2x; Tiff Wood is in the two seat

All of his tremors are on one hemisphere of his body - in Todd's case his left side. Because only his left side is impacted by the Parkinson's, he produces asymmetric power. I've spent a lot of time sculling with Todd and he is a very fast single sculler. In watching videos of him sculling, I noticed his boat, while going straight, was doing this S-turn through each stroke. Todd's right hand, or port scull, produces more power and yards the boat around to starboard during the drive. Then at the release, he drags his port scull out of the water to correct for this. It's no different than paddling a canoe alone. You can only take a stroke on one side, so you naturally drag the paddle after the stroke to correct for the asymmetric thrust.

No one taught Todd to do this, and it's not conscious. He didn't know he was doing it. His body is finding a way to make the boat go straight. It's really extraordinary that he is able to move a single so fast. I don't believe there is any PR3 1x designated boat, at any level. If this boat class existed, I think Todd would be a contender.

The guy has never complained once. He's never asked, "Why me?" I sometimes feel a sense of embarrassment around Todd because I'm not sure I'd have the character to handle what he deals with all day, every day, with such grace and courage.

All the local news affiliates have done segments on Todd and in one he tears up when talking about his journey. Todd's one of the most inspiring guys I've met and his character is extraordinary.

His doubles partner, Pearl Outlaw, is legally blind. She's amazing as well. Watching Pearl and Todd launch their double is like nothing I've ever seen. I encourage to you try and take a double off a rack, walk it to the water, go up over your head and place it in the water...all the while keeping your eyes closed. This isn't an 8, where one person can wing it a bit. Pearl is holding half the boat and she's absolutely gripped every time, and I understand why. I have tried closing my eyes carrying a double and every time, I immediately open them, for fear of falling, etc. And that's just the act of launching the boat! 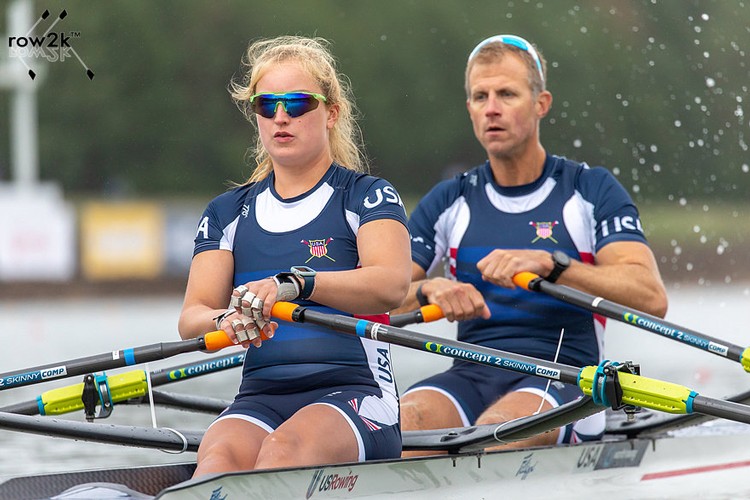 Pearl Outlaw and Todd Vogt at the 2022 World Championships

In addition to rowing side-by-side in our singles, I have also rowed a lot with Todd in a pair. When we do, he rows port and I row starboard, with me in the bow. When we're clicking along nicely on glass water, on the recovery, and if it's well set, I can feel Todd's tremor shaking the oar, which bounces slightly in the oarlock. We often do pause drills, and on one pause sequence, we had ten perfect strokes. It's never happened to me before or since in any boat. The water was glass, and during the pause, it felt like we were on a gravel road. The boat was set up and the whole thing was vibrating. Again, how he's doing this leaves me in awe all the time.

Todd's warm up is at least 45 minutes. He says he feels like an old man who needs to limber up, loosen up, and warm up his entire body before every workout. I just watch him while I sit there, at 52 years old, not even bothering to stretch or erg, knowing I'll get warm during pick drills and the first 5k of steady state, before any real work begins.

And finally, I have sat next to Todd for many of his US Para Rowing-mandated erg tests during the winter. By sitting next to, I mean I've done the pieces with him. These have all been either 2K or 6K pieces. Todd always has a plan with respect to stroke rate and splits. My job is to pace Todd on the rate, making sure he doesn't fall off the rate during the body of the piece. Then, at the end, my job is to drive the rate up and make sure Todd goes with me.

The problem is I'm not doing 12 training sessions/week, so I dial the drag way back, from 120 to 105, which allows me to sustain a higher rate, aerobically, and maintain ratio - it's amazing what one can do when you reduce the load! My splits aren't that much slower than my current PR levels, but just backing off the load a touch allows me to be there for Todd at the end when we go up. There is a huge difference between 98% and 100% effort on the erg. Again, my real job is to make sure Todd goes fast. 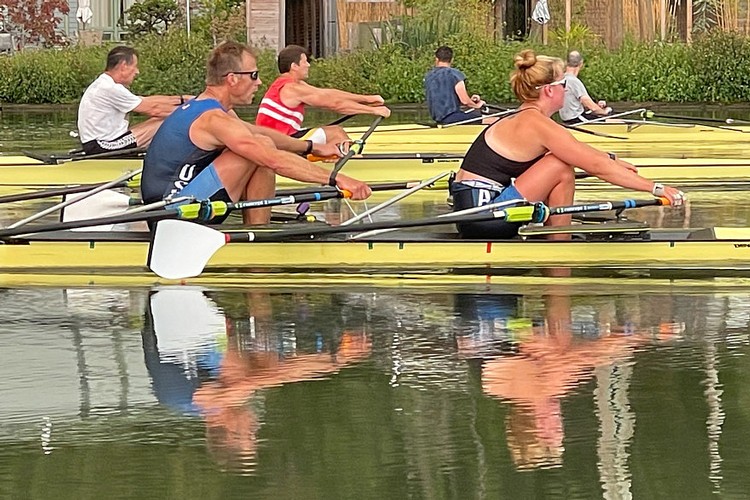 I've been there with Todd when he's set multiple WRs for his PR3 age category, often breaking his own record. This has been personally very rewarding, as he and his coach, Susan Wood, have said there's no way these records would have fallen had I not been there, side-by-side, going EFI (Every f__king inch) with Todd. In 37 years of rowing, these are the most rewarding erg pieces I've ever done, and despite the reduced drag, they are not easy.

The whole thing is almost surreal.

I hope that sheds a bit more light on what's going on out here. I was at our boathouse this am and Todd and Pearl launched. First comes Todd's laborious warm up, then Pearl puts her delightful German Shepherd into a kennel we keep at the boathouse, then Todd takes her arm and helps her navigate down the stairs, and off they go...

For more about Todd, watch this profile that ran on KGW News in Portland Oregon: Portland to Coast Relay: World-class rower Todd Vogt to walk with Brian Grant's team.