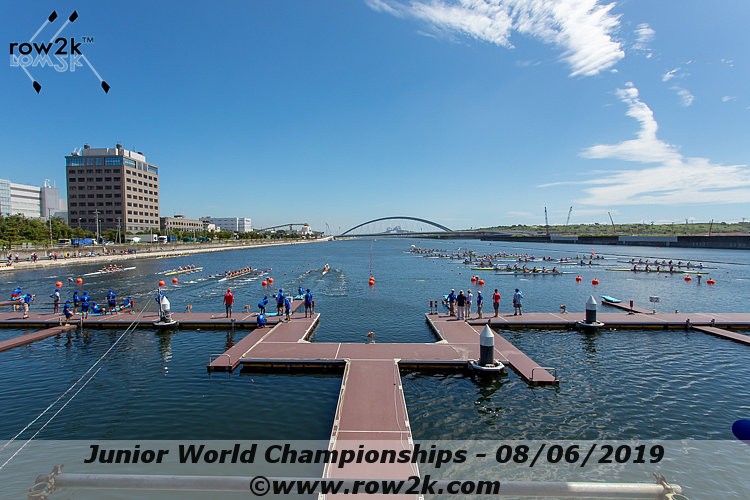 More Observations about the Racecourse
Up at the start today for the practice starts and spares races, it was a bit different experience than yesterday's time in the boatyard and finish area; the start is right in the mix of the fairly industrial port (you can see the square platform for the aligner's hut here), and it does present a few interesting but solvable issues.

The top of the course is bordered on two sides by fairly busy roads, which I like; the fact that the Rio course was right in the bustle of the city, with families playing in a small park at the start, added some genuine charm to the proceedings. Despite the presence of two parks on either side of the course, the area of Tokyo where the course is located is much more industrial than Ipanema, functioning mostly as a fairly busy port, but even so this always feels like a good thing. The bridge at the start is really close by; it might be 10-15 feet from the tower to the bridge railing. 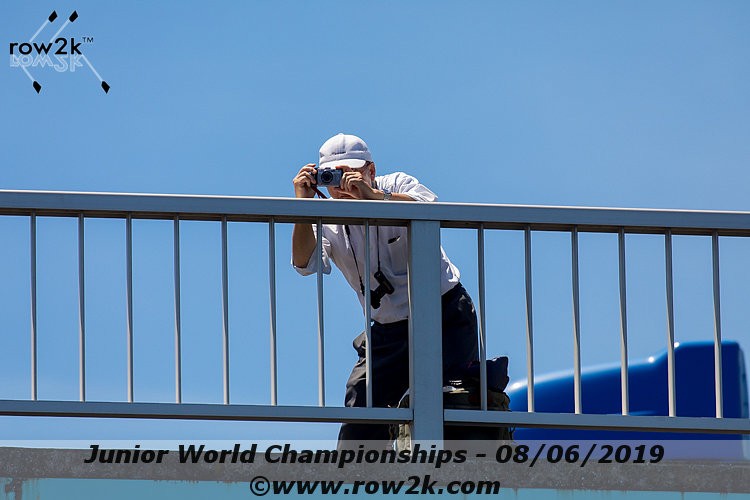 The downside in this case is that most trucks in Japan make a beeping sound when they turn on their left blinkers to warn pedestrians that they are going to turn, and there is a fair amount of traffic turning left onto the bridge. As a result, there are long periods of continuous beeps while the light is red, which isn't a great thing when the start is signaled by a beep as well (albeit a different sounding beep).

There is a chance that a solution will be reached by 2020, but for now, go on the light.

Similarly, depending on the wind, air traffic into Haneda can go right over the start line, accompanied by engine roars; the main patch of noise lasts only a few moments, so the starter this morning was just pausing briefly to let the noise pass, and off they went. 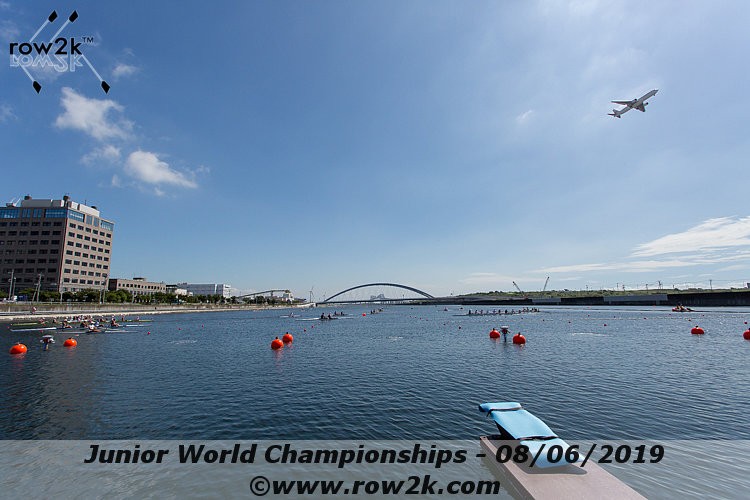 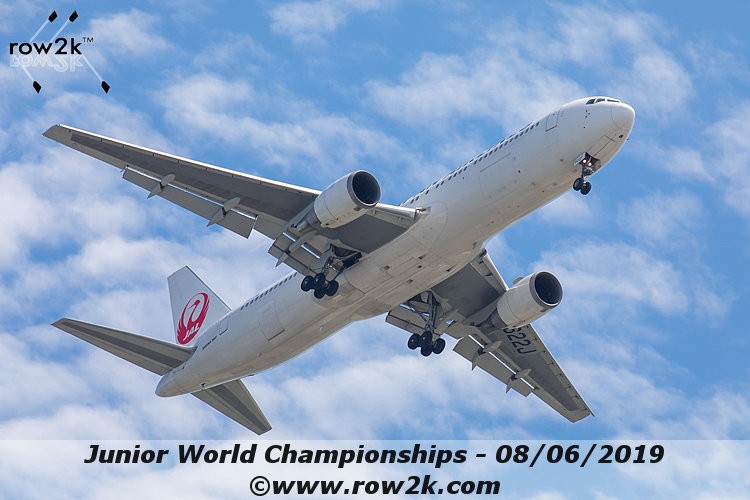 The practice starts and to a lesser extent the spares racing was definitely chaotic, attributable to a lack of familiarity with the sport on the part of many of the volunteers – if you have never rowed, being a stakeboat person with a boot system can be a pretty novel experience – as well as some language barrier factors. "This is why we do the practice day," one official was overheard to say. 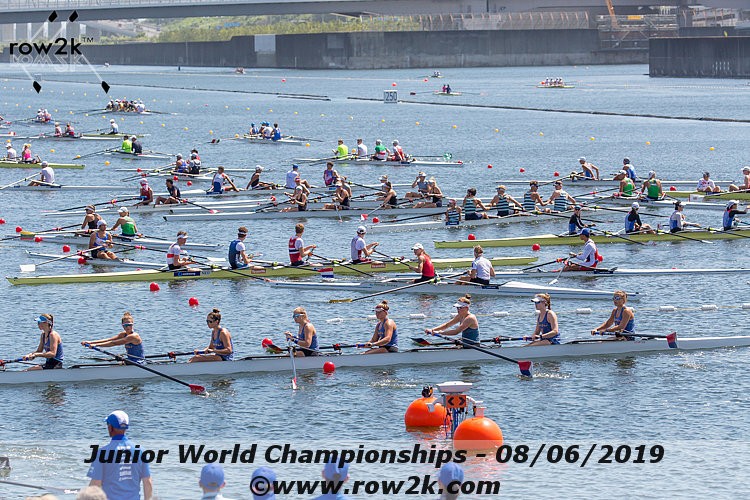 The lanes are backwards from the '1-7 left to right" standard (which is relatively new in itself); this is because the television camera, which will be on a runner that goes the length of the course, is on the left side of the course, so that when the lanes are listed top to bottom on a television screen, they correspond to the actual lane numbers.

The dock itself is extremely hot, so hot that you can't really put your hands on it; in fact, apparently a shoe started to melt yesterday. This was also the case in Gifu in 2006, when photographers brought towels and pads out to the start so they were able to sit down after the two-minute call. Today during the practice starts, no one was required to sit down; I imagine tomorrow will be a different story. 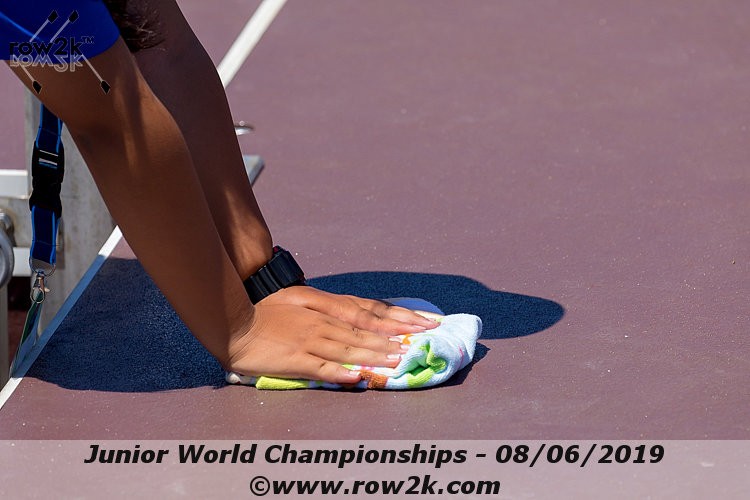 It got pretty windy this afternoon, to the point that folks were lashing down tents, but the water wasn't terrible; I know I said this yesterday, and I'm not guaranteeing anything based on two days at the course, but it just hasn't been too bad. 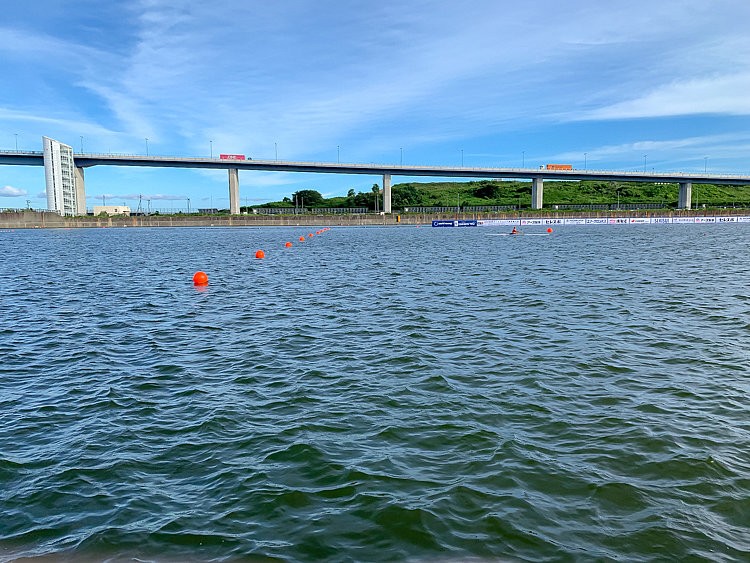