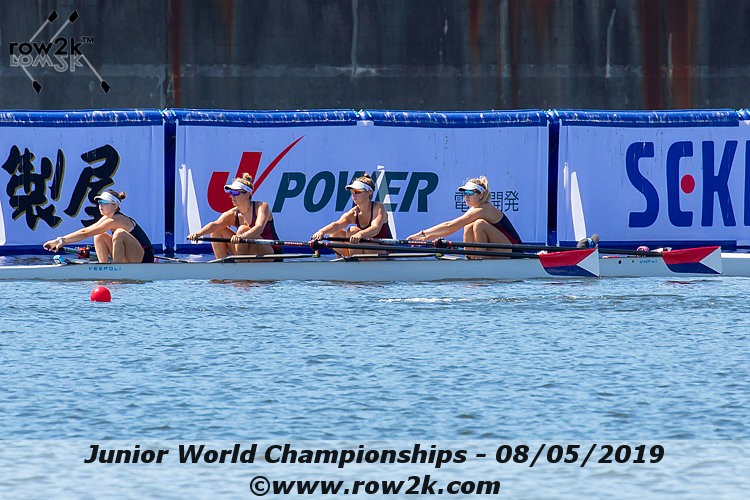 Time to bring the Jr Power

row2k has been in Tokyo for 24 hours, and it has definitely been interesting so far.

First, a short walk through the Daiba neighborhood upon arrival to get bearings resulted in complete immersion in a concert series featuring Japan Idol contestants; fully five stages that I saw were filled with young women singing karaoke style to penned-in crowds of mostly young men, all of whom knew the lyrics, dance moves, and more. One concert was staged underneath a giant Gundam statue, completing the effect. 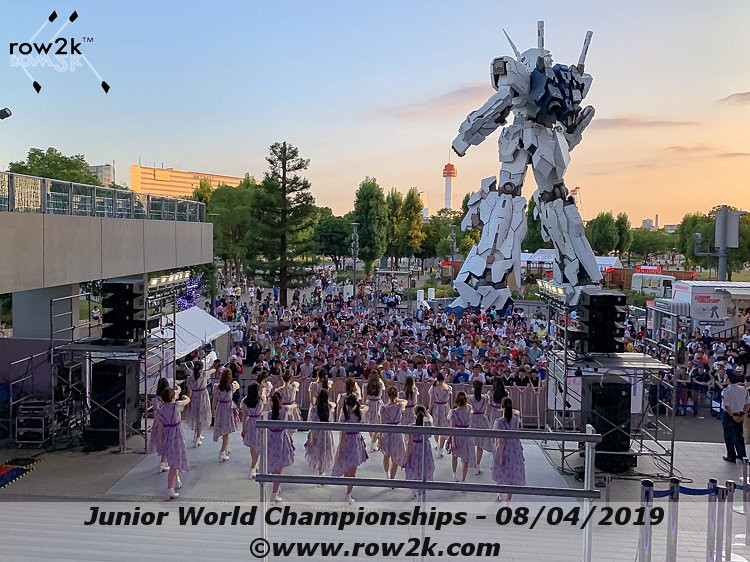 If that wasn't rocking enough (sort of), about a half hour after arriving back in the room, a magnitude 6.4 earthquake hit near Fukushima, shaking the22nd floor hotel room enough that water was sloshing around in the bathroom and clothes hangers were clanging. As a row2k staffer noted, welcome to the Ring of Fire!

Speaking of the heat, Sunday was pretty sweltering at the course, with heat index pushing well above 100 degrees. Comparisons to New Jersey in July were rife, so it's not like it was completely unfamiliar, but with racing taking place 9:30 to noon or one each day, it could be getting pretty intense for some of the later races. 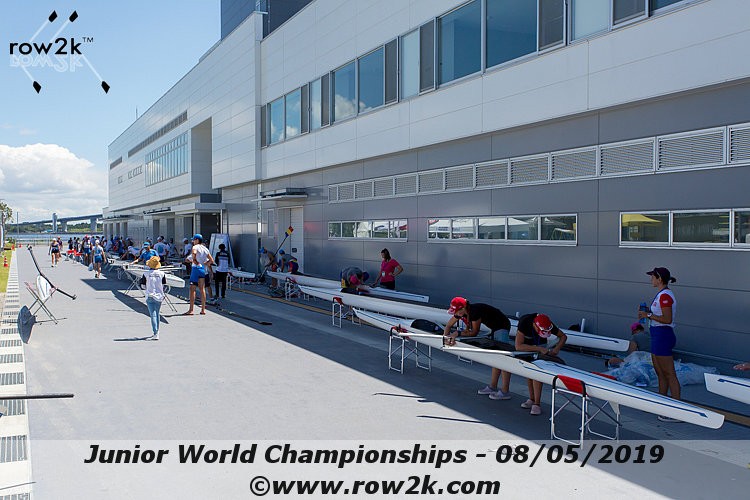 Crews rigging in the shade

The Olympic Racecourse
In the pre-Olympic year, the Junior World Championships is typically held at the Olympic venue, and serves as an official test event for the course, infrastructure, staff, transport, and more. As best I can tell, the Tokyo LOC is as far along as I have seen to date, an impression that was confirmed by a junior worlds veteran at the course, who said he hadn't seen an Olympic course as race ready as this one in a long time.

The venue is really pretty solid; the boathouse is impressive, with more than a dozen really nice boat bays and solid racks; there is nothing makeshift about the main buildings, lots of crowd and traffic flow elements are already in place, 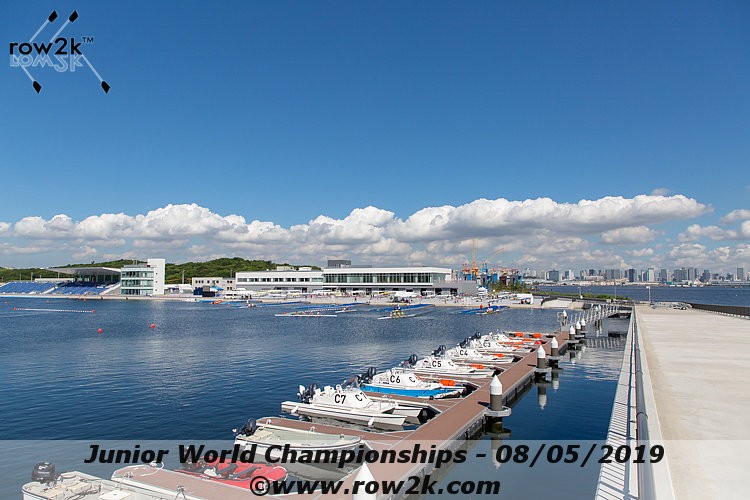 The venue from beyond the finish line

The course is really pretty cool, with the giant Tokyo Gate Bridge right at the finish line – drivers on the bridge should be able to see the racing from their car windows – and lush greenery on both sides of the course for most of the way. 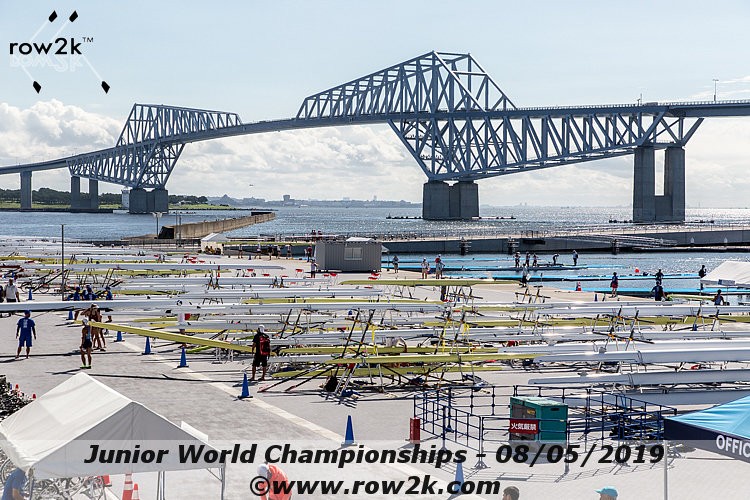 Access may be tricky, as the access road out to Sea Forest goes through a tunnel, so there is no way to walk to the venue, which means shuttle buses galore, which are almost always problematic for moving a lot of people.

There are some rough edges along the lines of a few unpaved walkways, and a grandstands on the far side of the course still has to go in (and access figured out) , but all told, if it were April 2020 and they were at this point in preparation, I think they could make it if motivated.

It will all come down to the wind, a fear that was exacerbated significantly by this video posted in June - not to mention the presence of wind turbines right along the race course. 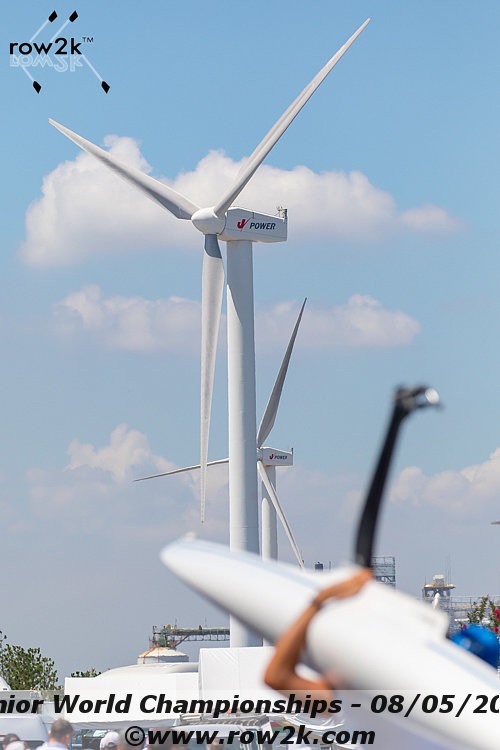 By all reports, however, so far this week practice conditions have been from decent to great, so there is some hope that the video was just a 'bad day.'

Notes from the Course
Most of the above commentary are 'Notes' material, so there isn't much left to tell, but here is what we got.

- The German double was briefly a 'double with' when a large fish jumped into their boat up near the start yesterday.
- This show never gets old.
- The Haneda airport is about 4km away as the crow flies, so the course is right on the traffic pattern of the planes that go nearly straight up and then bank east to avoid roaring over Tokyo.